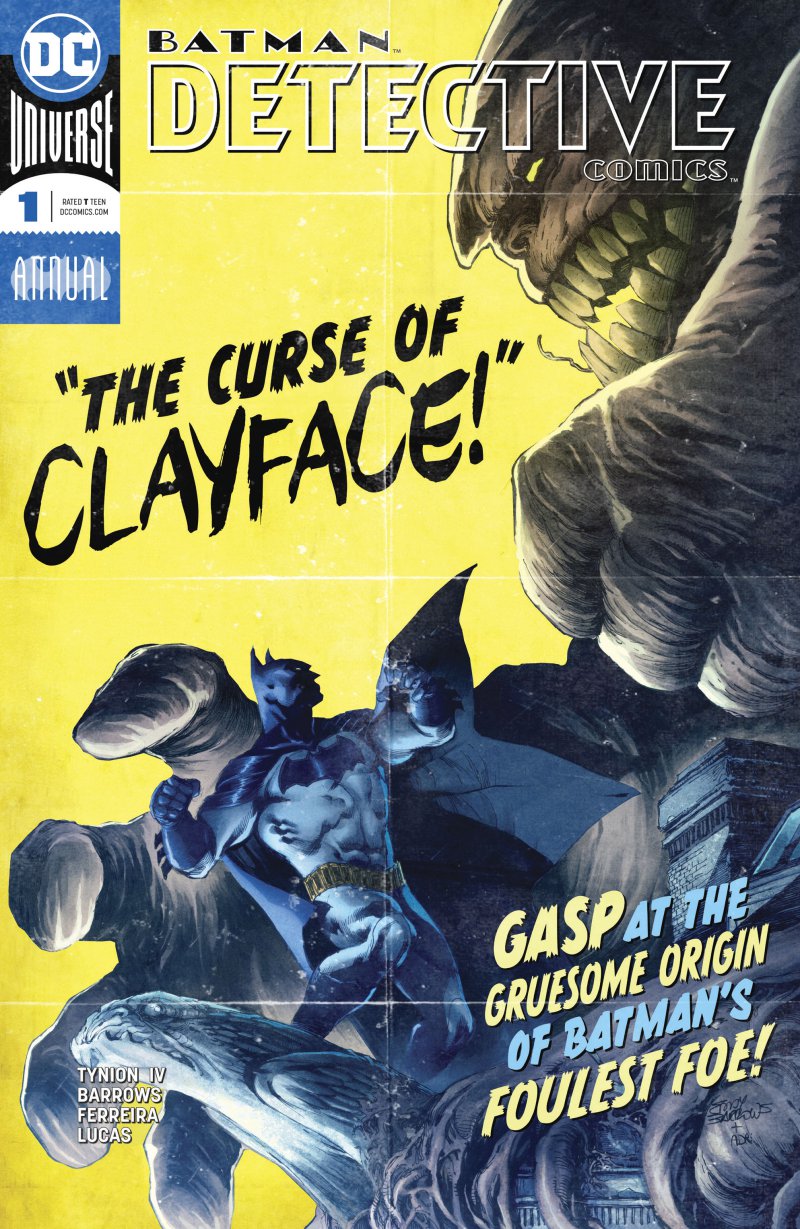 Overview: The tragic transformation of Basil Karlo into Clayface is told.

Synopsis (spoilers ahead): Many years ago, a young Basil Karlo is fascinated by the monster masks in his father’s study. His father, Vincent Karlo, shows him a secret chemical manufactured by the Dagget company that allows him to mold his own face into monstrous shapes. Basil’s father expresses great bitterness at the studio heads who shut him out of the work he loved, and counsels his son to always hide the monster inside, since no one really loves a monster.

Twenty years later, Basil is a movie star, trying to get his agent to get him a part in Veronica St. Clair’s film “Second Skin.” Their conversation is interrupted by Glory Griffin, a Production Assistant from one of Basil’s films, who has become something of a friend to the actor. Later, above the Hollywood sign, Basil explains to Glory that he wants to show the world his darker parts through this film, to prove his dad wrong, that people can love a monster.

A few days later, Basil, driving, tells Glory he got the part. The call is interrupted by another, which lets Basil know his father is dead. The shock causes Basil to lose control of his car and crash violently. Days later, Basil awakens to Glory and the doctor, who try to tell him he’s lucky to survive, but his face is hideously burned and deformed. He curses them both, and slinks away to his father’s apartment to clean out his stuff. Basil finds a stash of the Dagget chemicals in the apartment, and uses it the way his father showed him twenty years earlier.

Veronica St. Clair, director of Second Skin, argues with Cal, Basil’s agent. Cal wants to find a new actor, but St. Clair wants to keep Basil. The actor himself shows up, with no sign of his injuries. In the parking lot, he tries to brush off Glory’s astonishment. Alone in his apartment, he calculates that he needs more of the chemical, which is manufactured in Gotham.

Batman listens to a recording made by Commissioner Gordon of a Dagget employee who insists that their company doesn’t make the chemical, called “Renu”, anymore to a mysterious caller. Gordon blames Batman for the weirdness that’s been coming around Gotham since he showed up, as the camera footage seems to indicate that a face-changer is behind the calls and attempts to steal the Renu chemical.

Later, Basil finds a huge stash of Renu, but is surprised by Batman. Batman punches him, and is horrified when his fist plunged into the face itself. Basil wakes up in custody in the hospital, finding Veronica St. Clair is firing him, not because of his deformed face, but because he tried to hide it. Batman arrives just after St. Clair storms out, telling him that he’s not a monster, but a man who has a chance to put Roland Dagget away for illegally experimenting with Renu. Instead of helping Batman and DA Harvey Dent, Basil breaks into the police station to steal the chemicals, stored as evidence. The police fire upon him, causing him to be buried under a massive wash of the chemicals.

In another part of Gotham, St. Clair is meeting Basil’s replacement, when Batman shows up and tells them all to run. Clayface, massive and completely full of rage, bursts in behind him. Both Batman and Glory try to reason with him, to remind him that he can still choose to be good, but instead, he throws some of the leftover chemicals all over Glory, creating the Victim Syndicate member Mudface. Clayface proclaims that he’s going to show the world that he’s a monster inside.

The comic ends with a flashback to Basil and his father watching one of Vincent’s movies as a monster, and his father reminding Basil to never let the world see the monstrous nature inside.

Analysis: This issue serves as both the beginning and the end of Clayface’s story in Detective Comics. While not strictly necessary for the story James Tynion’s been telling (as Clayface is a well known villain with an oft retold backstory), it is a very well crafted one, and fills some gaps in, like the creation of Mudface, and Batman’s connection to Clayface’s creation. Tynion does a fine job of showing the struggle within Basil, and adds a lot of classic Gotham touches, like DA Dent, a younger, wry Gordon, and a Gotham not yet far gone enough to scare away film productions.

Eddy Barrows provides possibly his final issue of this run of Detective Comics, and really plays to his strengths with his ability to draw terrifying but emotional faces and figures. Clayface has been the most surprisingly effective parts of Tynion’s run, largely due to Barrows’ ability to evoke pathos from a monstrous glob of clay in the shape of a man. The dual technique style Barrows has used for the entirety of his time on this title plays extremely well with the malleable, two-sided nature of Clayface’s struggle. While Barrows sometimes wasn’t the best fit for clean cut heroic figures like Tim Drake, sometimes giving the Boy Wonder a grin that edged past cheerful into creepy, his work with Basil, where the creepiness is completely warranted and builds the conflict of the story itself, is a bravura effect. Whether this is his final issue of Detective (for now, at least) or not, Barrows has served DC’s oldest title well, and we wish him all the best.

Final Thoughts: A well crafted, emotionally effective re-worked origin of a classic Batman villain, giving us the foundation of the character’s arc in today’s run of Detective Comics.