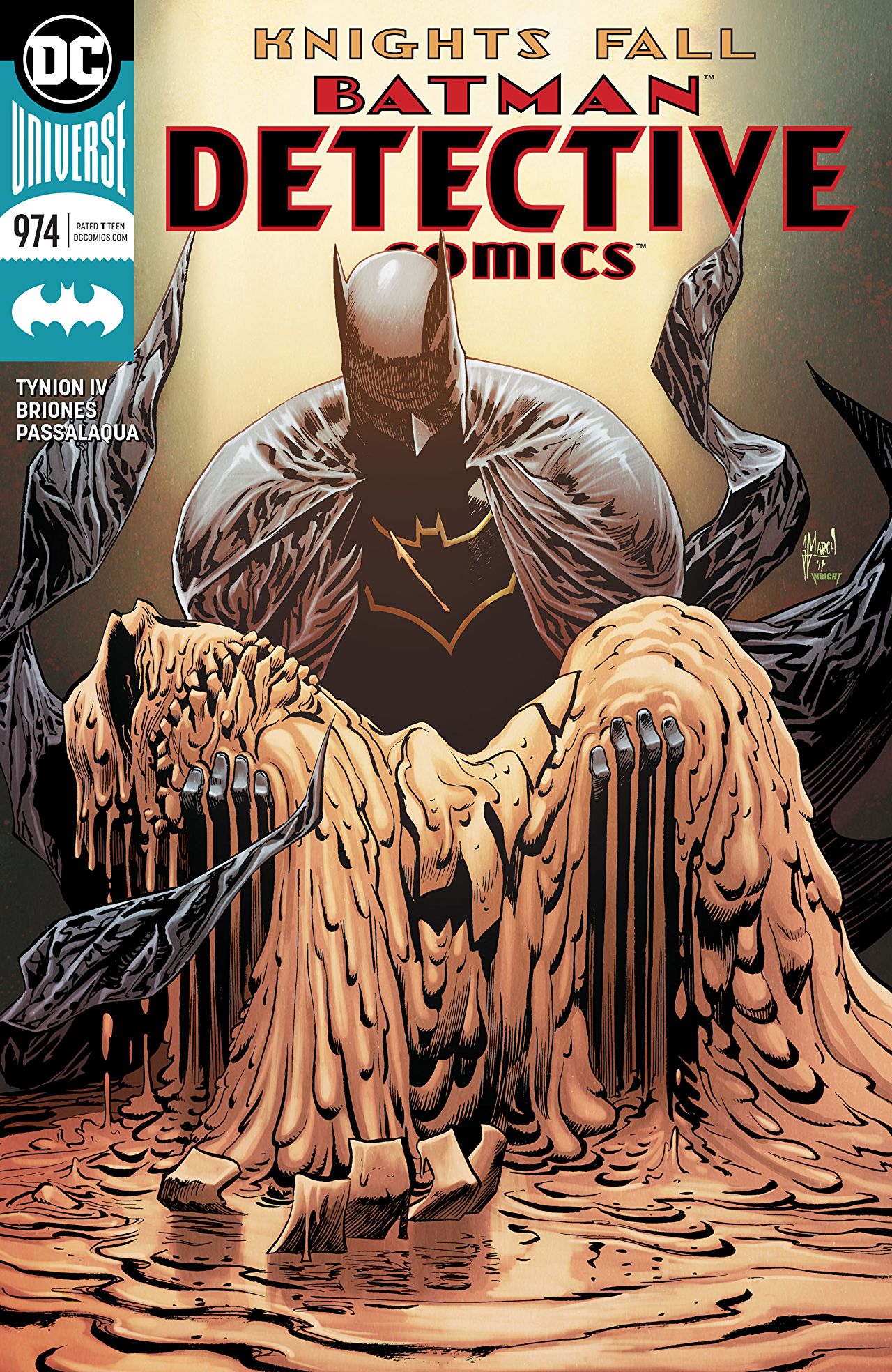 Overview: The Gotham Knights disintegrate in the aftermath of Batwoman’s choice.

Synopsis (spoilers ahead): As Basil’s body melts into clay in her arms, Cass shrieks in agony. Steph, Tim, and Dr. October rush to her side, and Dr. October uses her technology and knowledge of monstrous biology and weapons to deduce that Batwoman’s bullet destabilized Basil’s body completely, killing him instantly.

Batman arrives on Kate’s rooftop, smashing the Clayface-killing gun, and orders her to stand down. Batman and Batwoman face off, Bruce outraged at her taking a life, Kate furiously defending her choice to save hundreds of lives from the out of control Clayface – including Cass, who was right next to the rapidly expanding ex-villain. Tim, Steph, and Cass arrive. Red Robin argues that they must always find another way, but Cass takes it farther, ripping the Bat off of Kate’s uniform. She tries to tell Kate that the Bat is special, and it means they never kill. Batman embraces Cass, telling her it will be okay, and telling Kate to take a break from active duty. She is taken aback, as are Batwing and Azrael, who also arrive on the rooftop. Batman draws the line – Luke and Jean-Paul can stay with him and the younger Knights, or leave with Kate.

Three days later, Dr. October administers the cure to Mudface, turning her into Glory Griffin again. Though the doctor is deeply, intensely angry at Glory for what she did to Basil, as Basil himself had determined that Glory needed a second chance no matter what happened to him. Dr. October leaves, telling Glory to make her second chance worth Basil’s sacrifice.

In Robin’s Nest, Steph arrives. Tim is trying to build the second Belfry, but notices she came in civilian clothes. He says that he can make it work, but she says he’s losing himself.  She leaves, telling him she loves him, but she needs to be out of Gotham since she can’t watch him turn into Bat-Tim from the future. Tim collapses on the ground, and Batman steps out from the shadows. Tim cries that he can’t see a way to avoid becoming Bat-Tim, since Bruce makes all the same decisions which lead down that path – the curse of Batman, one that Tim can never escape.

In her own Batcave, Kate rests and broods. Jake Kane arrives, telling her he’s proud of her and offers her the chance to lead the Colony again. She looks pensive.

Watching the Knights disintegrate on many monitors, Ulysses Armstrong, the General, tells himself and his copy of Brother Eye that the time has come for his plan to accelerate the chaos.

Analysis: After last issue’s almost perfectly balanced tragedy, this issue suffers on a few fronts while still providing several strong portions. As usual, Tynion gives excellent character moments – Cass’s reaction to Basil’s death in particular. He also continues to allow Batman to express his care for his team in a way that other writers typically do not – in the way Bruce listens to Tim and hugs Cassandra. Tim’s struggle with the darkness within him provides a welcome counter to the slide into the cynicism that Fabian Nicieza started in the last half of the Red Robin series. While Tim always possesses the tendency to give in to the unhealthiest sides of his mentor – Dixon’s portrayal of him as controlling and a bit arrogant has always been the flip side of his dutiful and determined nature – Tynion draws from the work of Nicieza and Geoff Johns to push Tim in a dramatic direction without sacrificing the core heroism of the character.

Tynion also puts two of his characters into key roles for the next arc, “Batmen Eternal,” as Kate assumes control of the Colony and Ulysses Armstrong plots in the shadows. From the beginning of Rebirth, Tynion has said that Detective Comics serves as the functional sequel to Batman Eternal and Batman and Robin Eternal, with the Colony forming the core of that thematic idea. The clash between Batman, the allies he has left, and Kate, her father, and the former weapons expert Armstrong feels like a natural development from their initial appearance in “Rise of the Batmen.” Tynion’s has kept his breakneck sense of pacing all the way through this run of Detective Comics but has also done a fine job of constructing the framework of plots both current and yet to come.

A few significant elements strike false notes, however. After last issue’s seeming decision to stay with the team and rejection of Anarky by Steph, her dramatic decision to leave the team and Tim as a reaction to his increasing darkness not only gives the reader whiplash but also continues to frustrate fans of the character who wants to see her in a heroic role. After being marginalized for the past thirty-odd issues, for Steph to return, decide to stay, then decide one issue later to leave again, presents great frustration, even if her reasoning in this issue makes sense. As a connected issue, Tim’s struggle with his darkness, for all that Tynion handles his awareness and desire to avoid becoming Bat-Tim well, seems a bit too similar to Clayface’s spinning his wheels waiting for the cure, a process that took over twenty issues to come to head. Though obviously sometimes a writer of a team book must provide just a hint of an ongoing plot thread to keep it in reader’s heads without actually resolving anything yet, the way Clayface and Tim’s problems eat a large portion of page time without actually breaking one way or the other doesn’t present the best use of space. Hopefully, as solicitations show that Tim’s problems with Batman will form the core of at least one upcoming issue, some decisions will be made, instead of remaining in a status quo of unnecessarily unresolved tension.

French artist Phillip Briones provides art, and like his recent issue for Christopher Priest’s Justice League, Briones provides a very solid issue. His clean-lined, appealing character faces are a bit more enjoyable than Eddy Barrows’ work, though there are moments like Tim and Kate’s final scenes of the issue where some serious inconsistencies mar the otherwise strong depictions. The layouts aren’t as inventive as Barrows or the other Detective starting artist, Alvaro Martinez (who thankfully returns for the next issue, a milestone 975th event), but as a fill-in artist, Briones is more than capable – perhaps a bit more suited to the book than the beginning of this arc’s Joe Bennett (who, though a fine artist, was paired with an unfortunate inking style that didn’t highlight the best qualities of his work). Allan Passalaqua provides some of his first colors for this run, after a year on Batgirl and the Birds of Prey. Passalaqua excels at vivid and dramatic coloring, and this issue really provides excellent contrasts, with the colors of everyone’s costumes really popping in a brighter way than we’ve generally been seeing so far.

Though all the art team gives a great effort, the past three months of fill-in artists without any real consistency have disappointed this critic. Though any twice-monthly series will always challenge its art teams, one would hope that DC would put a priority on giving arcs a sense of continuity, instead of just throwing whatever artists are available onto the book. To do so takes away from Tynion’s consistently strong writing, and hopefully editorial will present a plan going forward to give the book a better sense of visual continuity.

Final Thoughts: Though a strong and logical progression from last issue’s climax, the breakup of the team is a bit disappointing after all the work Tynion did to bring everything together.