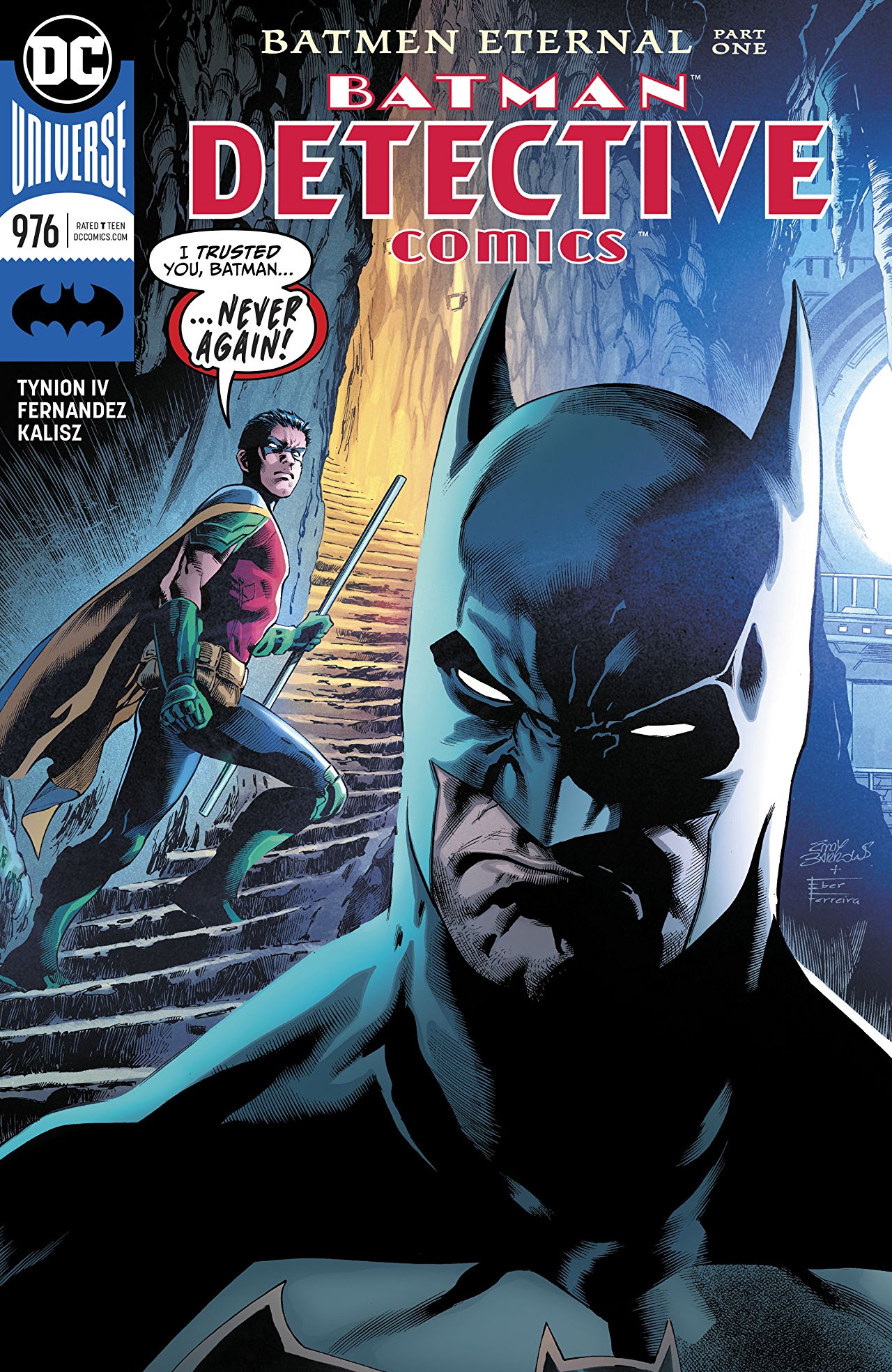 Overview: In the wreckage of the Gotham Knights experiment, Batman and his allies try to rebuild as the danger in Gotham grows.

Synopsis (spoilers ahead): Several weeks ago, some human traffickers are surprised by Orphan, who beats them all down easily, except for their leader. Boasting of his electrical powers, he vainly attempts to hit Cassandra, and Clayface takes him out. Together, Cass and Basil face the arriving reinforcement villains.

Today, in Wayne Manor, Dr. Leslie Thompkins is working with Cass, trying to help her deal with her grief at Clayface’s death. Cass says that she is not good, and she thinks Batman and his allies may do to her what Batwoman did to Clayface. Bruce listens in while sitting in the cave, and despairs at this statement. As Leslie leaves, she pleads with him to spend time with Cass.

On a ship near South America, several of the Court of Owl’s Talon assassins are in the process of destroying an economic plan for the whole continent when the Colony’s forces, led by Batwoman, Azrael, and Batwing, save the crew and vessel.

In the Batcave, Red Robin finds Batman working at the Batcomputer. Bruce confronts Tim about his attempts to recreate the Gotham Knights team instead of recovering and returning to the pre-Knights organizational structure of the Bat-family. Tim is furious, saying that Batgirl’s analysis from the last issue is wrong, and he can make the team concept work. Bruce says he’s not willing to see Tim destroy himself to do so, and asks Tim to talk to Leslie after she works with Cass. Tim leaves, raging at Bruce’s unwillingness to support his attempts to create a better world.

In the Colony Airship, Kate and her team return with the captured Talons in tow. Jacob Kane greets them, and together, father and daughter pitch their idea to leave Gotham to Batman and take the Bat-soldier idea global to keep the peace. Luke and Jean-Paul sign on enthusiastically.

Alone in one of his Robin’s Nests, Tim releases a scream of rage, sorrow, and frustration. He is surprised by a voice from the shadows – Ulysses Armstrong, the General, expelled from the Colony, offering to help him succeed in his plans using Brother Eye, stolen from Bat-Tim’s computer during his assault.

Analysis: It’s with a curious feeling of excitement and sadness that I approach the beginning of James Tynion’s last arc of Detective Comics. This run will reach forty-eight issues by the time it reaches issue #981 in May, and Tynion has kept the whole issue consistent with the character and big blow-out action scenes. The whole series has fulfilled the promise of Tynion’s two massive weekly series, Batman Eternal and Batman and Robin Eternal, so he’s chosen to conclude what he began in the arc “Rise of the Batmen” with the arc “Batmen Eternal.” Tim Drake even comments on the idea, saying that Bruce cannot be Batman forever (to take another title from a famous Batman story – though in this case, famous for being pretty darn terrible). Now, DC will never let Batman age past forty in regular continuity, but the characters don’t know that, so having them address the issue is realistic and leads to exciting story possibilities. With only five issues left, we’ll have to see if Tynion has come up with an answer that he didn’t really solve in the seventy-eight issues of his weekly precursor comics.

That being said, this issue is an excellent opening. A few moments of dialogue are a bit awkward, clearly Tynion stretching from one point to the point he needs to hit for the character moment, such as Tim saying “It’s been rough on me” – something that is clearly meant to set up Bruce’s love for Tim and his refusal to allow Tim to tear himself down just to build the team back up – but doesn’t really make sense as something someone would say in conversation. However, despite these rough spots, the relationships between these characters, so damaged by Tim’s death and resurrection and the subsequent killing of Clayface, provoke the same strong emotions Tynion has reliably evoked since #934.

Javier Fernandez, one of the regular artists on Tim Seeley’s recently concluded run on Nightwing, lends his pencils to the first half of this final arc, as a Detective series regular (and in my opinion, premiere artist) Alvaro Martinez is scheduled to provide the second half.  Tynion excels at writing action character entrances, so Batwoman and her team’s entrance is truly fantastic, and Fernandez, despite his tendency toward blobby and unappealing figures and faces, does full justice to the moment. John Kalisz uses a more limited and blue-dominated palette than the series has generally used during this run, but the sadness and shadows of the mood makes it work well. Sal Cipriano’s lettering is excellent, and for once, he doesn’t make the title credits at the end of the issue nearly unreadable with odd fonts and contrasting colors, as has sometimes marred previous arcs.

Final Thoughts: Tynion starts off his final arc with a solid foundation of action and emotion as Kate Kane and Tim Drake each reaching a turning point in their journeys.