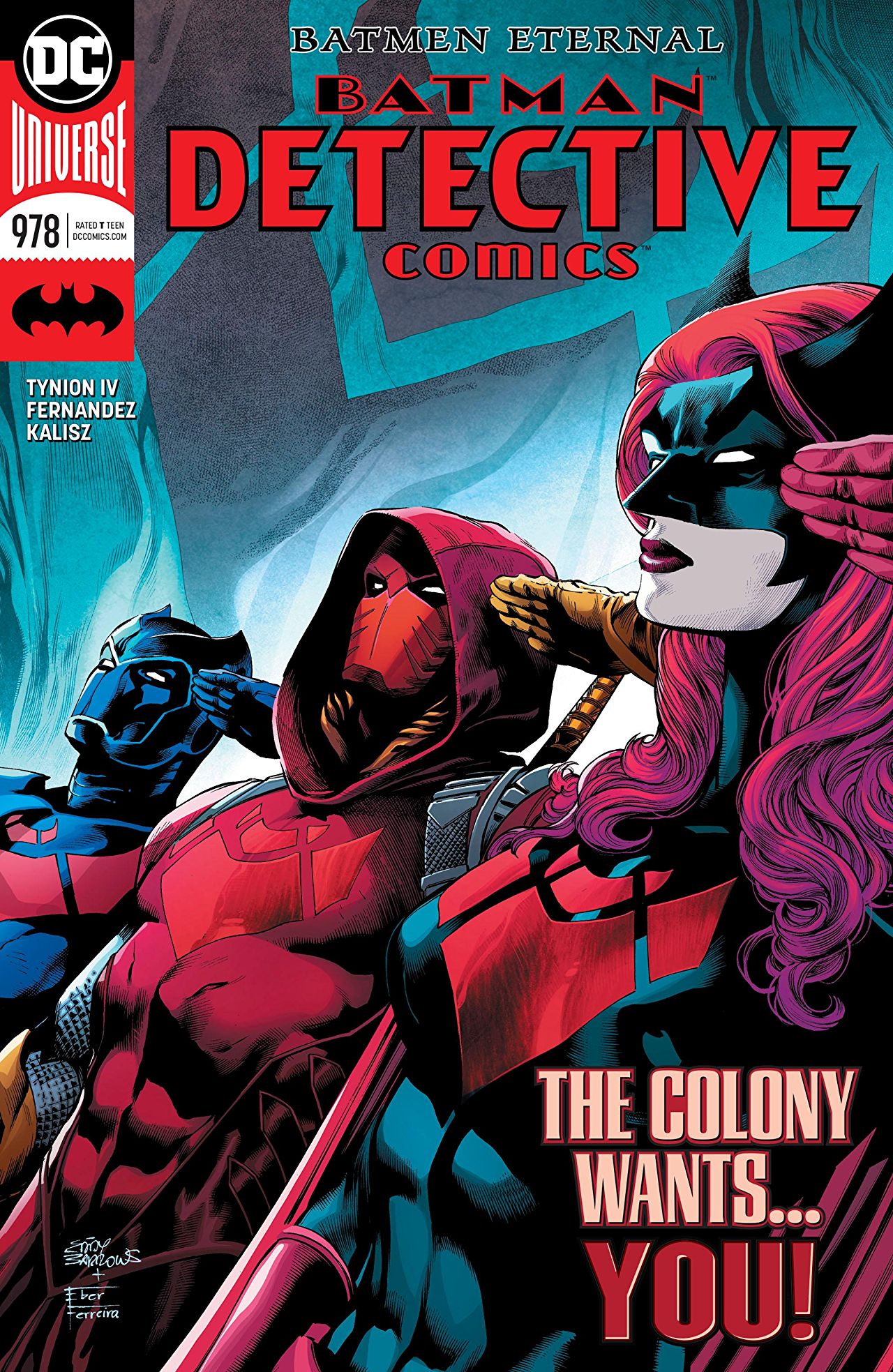 Synopsis (spoilers ahead): In the Batcave, Batman and Red Robin, the latter on crutches, go over the slaughter caused by the Colony soldier’s, who they have captured. Tim believes that Batwoman ordered the strike, but Bruce knows there’s something deeper going on since the soldiers are injured as if they struggled against their suits. He leaves Tim to guard them while he seeks out Kate.

Ulysses Armstrong tracks the Batmobile to Kane Manor, where Kate and Jake wait for him, with the Colony helicarrier hovering above. Jake opens by telling Bruce about the Kane motto, “Stemus simul – we stand together”, and how his mother hated it. Kate tells Bruce that neither she nor her dad ordered the strike on the mobsters, wanting to earn Bruce’s trust to stand together.

Cass walks into the cave as Tim observes the captured Colony soldiers, and he tries to see if she’s okay. She struggles with their mission, since it led to Clayface’s death, and Tim tries to offer to learn Shakespeare with her to help her. The reference to the transformation in A Midsummer’s Night’s Dream inspires Tim to check the soldier’s blood for nano-tech.

Ulysses shaves his long hair, giving himself a military aspect, and orders Brother Eye to take control of all of the Colony soldiers. On the helicarrier, Luke Fox and Jean-Paul Valley watch in horror as their new teammates are transformed into One-Man Army Corps – OMAC, one of the most deadly cybernetic foes Batman has ever faced. Ulysses broadcasts to Tim and Cass and tells them he plans to kill everyone stupid enough to stand in his way, just as he triggers an OMAC process to take over Tim.

Analysis: Though the last issue focused heavily on Tim Drake to the exclusion of all other characters, despite small (and quite enjoyable) appearances by Batman, Batwoman, Batwing, and Azrael, this issue gives a more even focus on other members of the team. Batman, Batwoman, and Cass, in particular, get some really nice scenes, and Tim’s desire to reach out to Cass in the wake of her grief and crisis of faith after Kate’s execution of Basil was a very touching moment, as well as being well integrated into the plot. Tynion’s deft handling of these characters will be sorely missed, though one hopes that Bryan Edward Hill will demonstrate a similarly strong grasp of and love for them in his five issues. The appearance of The General in his classic visual style from the Chuck Dixon run on Robin is yet another excellent callback to the world before the New 52, and the OMACs being controlled by Brother Eye continue to be as terrifying as they were in the OMAC Project. A couple of dialogue issues mar this story (Jake Kane saying “Blood enough” instead of “Blood alone” was a bit frustrating), but on the whole, Tynion continues to weave a solid story and hit the character beats that engage a fan of the Bat-Family.

Javier Fernandez rounds out his three issues (though half of the last issue was done by series lead artist Eddy Barrows) with a very strong performance. The dark pages and expressive compositions really highlight the energy of this story, especially in the scene where Batman confronts his cousin and uncle in Kane Manor. A couple of odd choices by Fernandez and colorist John Kalisz pop up when they choose to break off a zippetone (dot matrix pattern used as a shading effect) in the middle of a wall, a choice that breaks a reader out of the illusion of real space and materials. But the same zippetone effect is put to solid use in the final page on Red Robin’s suit as he transforms into the terrifying OMAC. Though some of Fernandez’s facial choices, such as the strangely blobby face of Ulysses before he cuts his hair, and the use of a pinprick iris effect in a character who is in an extreme negative emotion (also seen used heavily in the Rebirth Nightwing title) aren’t quite as effective as his moody scene setting, but his work with Cass in civilian clothes is much more appealing than her oddly flowing pantaloons as Orphan in previous issues.

Cass, after being absent last issue, has a strong showing here, and hopefully the fact that she’s in the Cave when the General transforms Tim will allow her to show Batwoman that one can face someone out of control of their actions and not choose the lethal option – and possibly give Cass herself some understanding of why Kate made the choice she did.

Final Thoughts: Batman and the Colony face annihilation together as a result of the General’s unhinged plans in an excellent installment of Detective Comics.