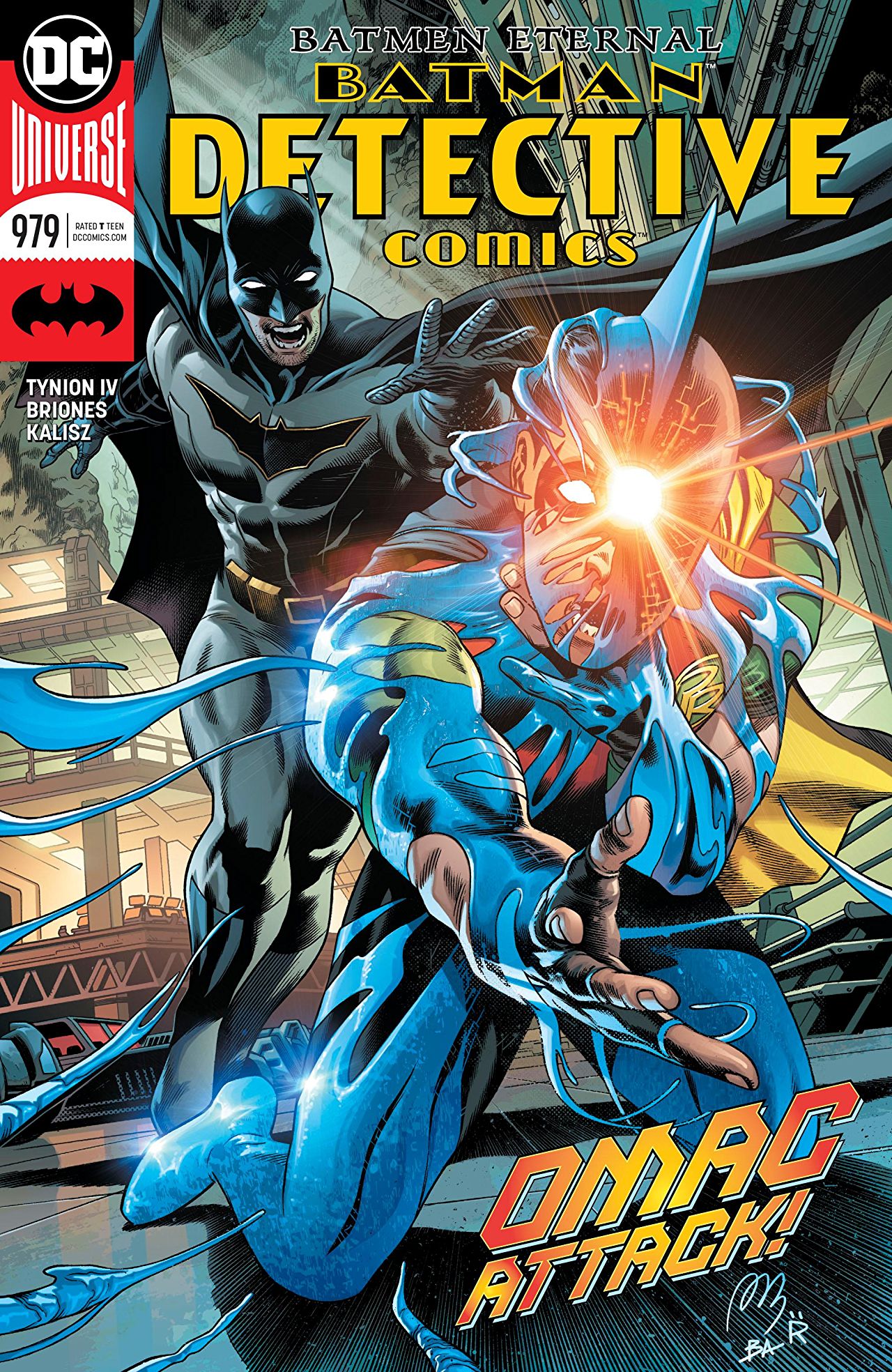 Synopsis (spoilers ahead): Red Robin finds himself surrounded by more dystopic visions – the death of Cassandra Cain by the League of Shadows, Azrael murdered by his own clones, Batwing in retaliation for his work with the Colony, and Spoiler from an unknown attack. He demands to see Ulysses’s face, and the General appears in his mindscape, saying that Tim’s body is getting a workout.

Cassandra fights the two Colony soldiers and Tim as they’re turned into OMACs, begging Tim to fight back. The General says that Tim can save them by assimilating them into the OMAC project.

At Kane Manor, Batman, Batwoman, and Jacob Kane fight off their own invasion of OMACs. The Batcave and the Colony’s airships not responding, they are joined by Batwing and Azrael. Luke explains that the OMACs are a nanobot shell, and are the same tech that future Tim brought back. Luke suspects that present Tim is using the same tools as his future self. Stuck in the General’s mental prison, Tim screams that it’s not him, but the General taunts him that they are starting to doubt him. Though Red Robin tries to fight back, the General takes full control of his body, creating a facade of Bat-Tim with Brother Eye’s face. Eye-Tim and the OMACs take off, leaving the Bat-Family wondering what is next. Jacob suggests killing all the OMAC hosts, but both Batman and Batwoman reject that outright. He asks the Kanes for time and rushes to the Batcave.

Cassandra leads him to the one person he thinks can get through to Tim – Stephanie Brown, the Spoiler. They find her, bitter and angry, in a tiny bolt-hole with her own setup in place. She sighs and agrees to help.

In the middle of Gotham, the OMACs build a huge, nano-technology enabled version of the Belfry 2.0.

Analysis: Two issues left. James Tynion brings a manic energy to this issue, showing small but vicious battles between the OMACs and the Bat-Family. Though not much really progresses beyond Batman finding Spoiler and asking her to help reach Tim, since we know that Tim isn’t agreeing with the General in the first place kind of destroys the tension in that plot progression. That being said, the dialogue is polished and fast-paced, as expected with Tynion’s Detective work.

There’s been a lot of conversation about the future visions in this issue and others of the Detective Comics run since A Lonely Place of Living, but to me, it’s pretty clear that Tynion is deliberately not only creating a dystopia unlikely to actually come to pass, but with Ulysses taking the reigns of showing Tim these visions both in this issue and other issues of this arc, there’s an extremely high likelihood that the visions are exaggerated or outright lies designed to destroy Tim’s resistance. For example, we see Stephanie dead as Spoiler here, but in the second issue of A Lonely Place of Living, we saw her alive and talking to Anarky, indicating that her death is likely another manipulation.

Philippe Briones, who already provided some solid if unremarkable fill-in work in the last arc, gives another good issue of appealing pencils. John Kalisz, the colorist for Javier Fernandez, provides colors for this issue as well, which gives a small but significant element of visual continuity for this arc, which is quite a nice touch. However, the overwhelming use of cold blues that give Fernandez’s art a spooky feeling doesn’t work quite as well with Briones’ more bold and cheerful linework. We’ll have to wait and see if next issue, solicited to be drawn by Scot Eaton, will also use Kalisz, which would be a nice touch.

Final Thoughts: The General’s plan bulldozes all in its path!