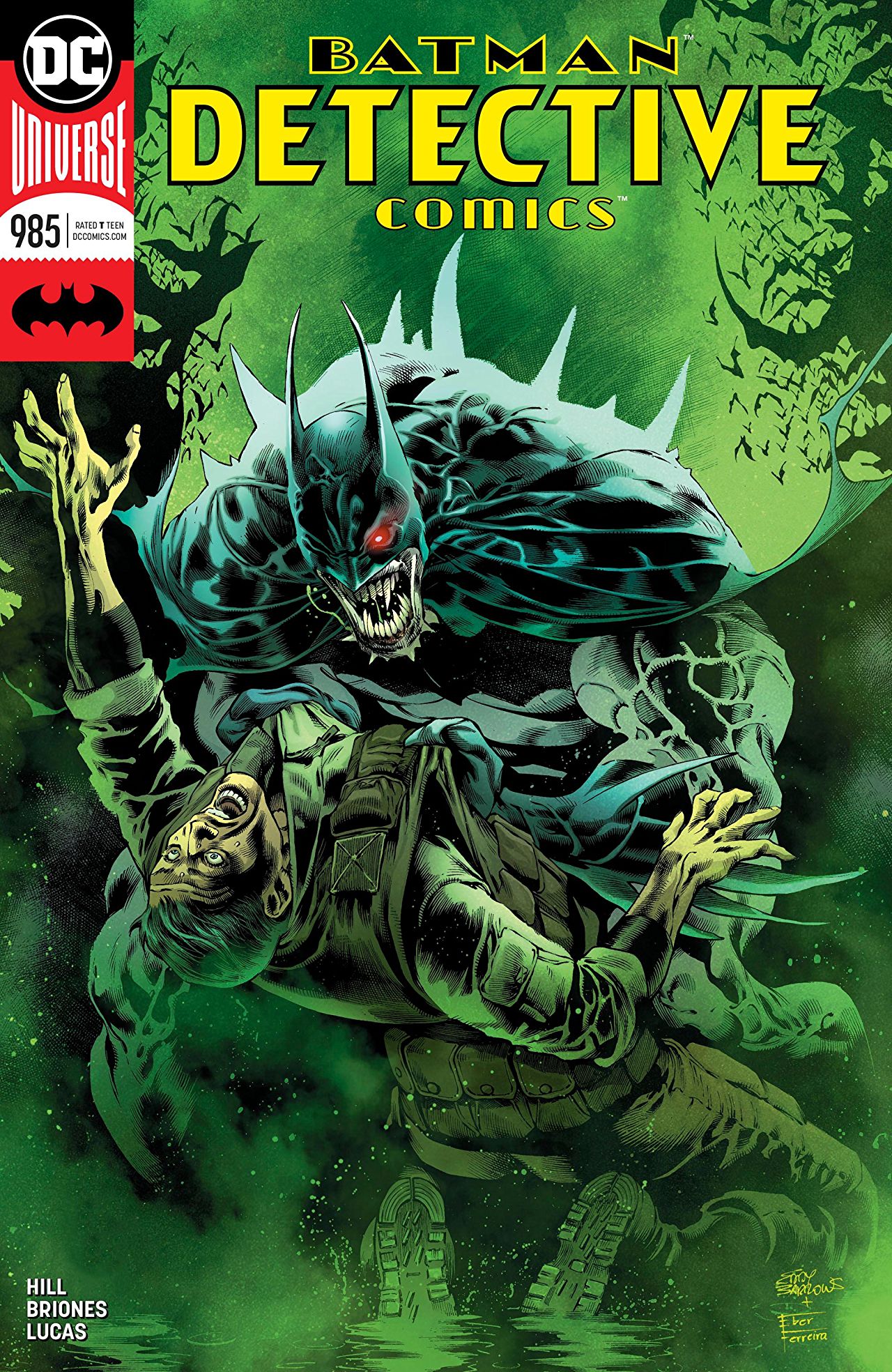 Overview: Bruce drives down memory lane to uncover the identity of Karma.

Synopsis (spoilers ahead): In the Batcave, Alfred states that Bruce has an “army of minds” and would be a shame if he did not use any of them to uncover Karma’s identity. Bruce reminds Alfred that Duke, Cassandra, and Barbara are off this case because Karma is too dangerous. Bruce lifts Karma’s knife to his face, staring at the edge and hilt to see if there were some identifying features on the blade. After seeing him analyze it, Alfred asks if he recognizes the blade. Bruce sidesteps the question and states that people with hyperthymesia have the ability to remember everything from their lives – their past experiences seem present. Alfred responds that he did not know Bruce had this talent. Bruce gets in one of his luxurious convertibles and responds he does not hyperthymesia. For him, an adrenaline-fueled drive will do the job of retrieving memories of the blade.

Speeding away from the Manor, Bruce thinks to himself that Karma knows him by “Bruce”; if Karma knows him that intimately, then he most know of Karma. He reasons that he is neither a part of the League nor the Court since those organizations are very disciplined and Karma is a loose cannon.

In order to recover his memory, Bruce thinks back to when Ra’s taught him to treat memories like a museum – each memory has its own specific place. He mentions that his personal view of memory is different: one goes through all the memories until you find the right one.

He remembers that in Markovia years ago, he stopped an arms trafficker who was supplying weapons to those suppressing Markovians’ freedoms. This man attempts to attack Batman with the knife (the one he is investigating), but Batman easily blocks his attack and counters by throwing him on the ground. While walking away, Batman releases a localized version of Scarecrow’s fear toxin and states he is karma.

Bruce stops the car and realizes that he created this maniac – like how he created all the other maniacs.

The next morning at Bruce’s penthouse (in some luxury skyscraper), Jefferson asks Duke, Cassandra, and Barbara where the outlet is because he is trying to make coffee with the coffee maker. The group ignores his question and responds that they do not need him to be their babysitter. Jefferson asks again where he can plug in the coffee maker, and again the group states that they should be out in the field helping Bruce than being babysat. Jefferson shares that they have been playing catch up the entire time and a boy has died. Jefferson breaks down the situation: Karma beat Cassandra at hand-to-hand combat (one of the best martial artists in DC), he gave Duke near-fatal injuries, and if Cassandra got beat, what else could Barbara do? After this speech, he used his powers to turn on the coffee machine. (You would think he would have thought about that idea sooner.)

The gang goes on to share that although Bruce did indeed tell him that the team is off the case, he really wants them to help him. Jefferson realizes that they are not planning to sit idly by and tells them to “teach me what you all can do.”

Across town, a bus full of children stops at a red light. Suddenly, it crashes into a car when the light turned green because Karma shot the driver in the head. Karma tells the lids that they need to be quiet and drives them away.

At the downtown GNN headquarters, the news anchor (from the first issue of this arc) is kidnapped on set while she is preparing for the evening news. Karma uses the anchor to explain his personal manifesto on a live broadcast. She says that Batman has twenty four hours to save them all. She says that all Batman has to do is remove his partners from his crime-fighting crusade. At the end of her speech, Karma throws a lighter at her feet, burning her alive on live television.

Disgusted, Bruce tells himself that he should have anticipated Karma’s next move. He has been too distracted and too comfortable which has caused him to not be at the level he once was.

Analysis: Bryan Hill, you have done an amazing job.

Although this issue is dialogue heavy, the story is engaging from page one to the end. For Hill to write a piece like this and not have any lulls at all is extremely impressive.

Hyperthymesia is an extremely rare ability to remember every moment you are alive as you were truly there. In the scale of memory recall, this is perfection. But, most people do not have this ability. Now, for those who do not have hyperthymesia but want to have a great memory, they can use the “method of loci,” also known as the “mind palace” technique. This is where one can take what we see or hear and form it into an object (like a vase or picture frame) where we can store this object in our “mind palace.” To retrieve this memory, one must “walk into the palace” and “pick up the object” that was related to the memory. This technique, although seemingly obscure, is widely used in these memory contests.

While Bruce does not have hyperthymesia nor uses the method of loci, he does employ a very common strategy for remembering memories. You know those times when you are in the shower and all of the sudden you remember something you were supposed to do? It is akin to Bruce thinking and driving his car. It is a way for the mind to relax and the subconscious can take over. When this happens, our subconscious can bring forth many memories we have forgotten or creative solutions to our problems.

I am shocked to see the brutality that Bruce used in the past to disarm Karma. Bruce left him lying on the ground choking on a version of fear toxin. That is plain savage. No wonder why Karma has a personal vendetta.

Bruce’s line ‘like I made all of them’ is a clear reference to comic characters and Batman fans who think that he is the reason for the Joker and the other supervillains taking residence in Gotham. It is interesting to see he does indeed shoulder that guilt. In his quest to save the city he loves, he may indeed be apart of the problem.

I love the art in this issue. From the pencils to the colors to the lettering, it is a beautiful book. This creative team has knocked it out of the park!

Final Thoughts: After seeing Bruce’s role in the creation of Karma, I am eagerly waiting to see how he will be able to shield himself from Karma’s mask in order to bring him to justice. I am a little leery of the Jefferson plot in this arc though; it is not bad, but Bruce’s plot is just more interesting. Bryan Hill is writing a killer arc; it is definitely worth your time.