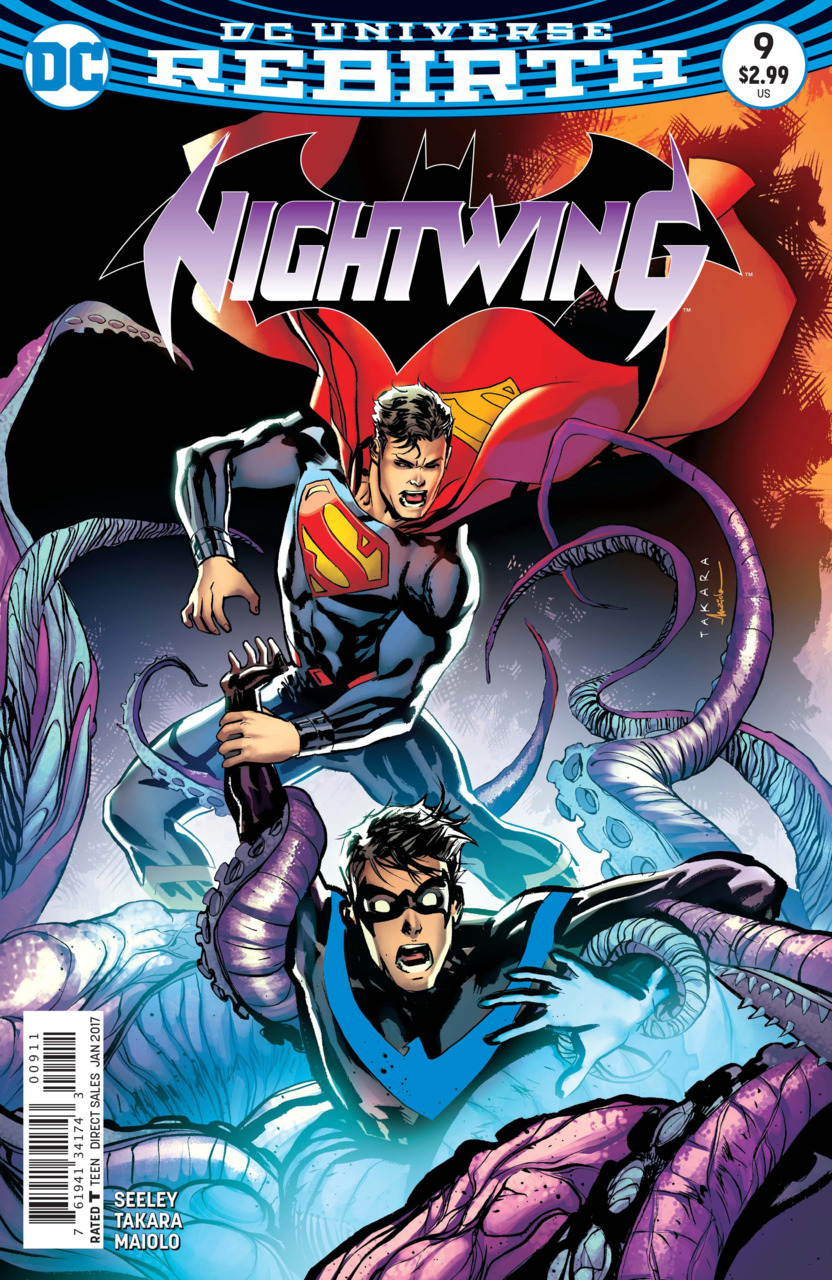 The first impression Nightwing #9 is that it definitely aims for the title “delightful filler.” On this idea, the issue moves at a nice, relaxed pace and gives readers a break from what has been a gritty, grimy feel in the preceding issues. The basic pitch of this issue is that Superman turns up (and this is the Superman from the pre-Flashpoint DCU, now out in the open after the the New 52 Superman has died) and offers Nightwing some advice on living and dealing with “destiny”.

Superman wastes no time in breaking the matter down for Nightwing and readers, giving his ten cents bit about how he comes from another universe, and how he is monitoring for events that mirror in a slightly distorted fashion what happened on his old world. Nightwing, to his credit, takes all this pretty easily. Like us, he is “too tired to pretend to understand all this alternate universe stuff.”  I can’t help but think it would have been a wiser move for DC to fully wipe the memories of everybody so they just accepted this Superman as the only Superman, but hey, I’m not drawing an editor’s wage from DC! Superman should carry around little cards that explain his universe-hopping though, just to cut down on time spent explaining it.

Nightwing is having quite literally “bad dreams” of a rather sinister character that is killing all his old friends in the Titans, leading Nightwing to wake up screaming. He’s scrambling for his reality in a situation that is in flux, with death the only constant. Clark, Tim Drake, both gone.

Superman then appears (semi-stalkerishly) outside his window and tells him that this threat is one that he is familiar with, from his encounters with the Nightwing in the pre-Flashpoint universe. It’s heady stuff but explained easily, and I enjoyed the comment from Nightwing that his version of the criminal responsible, Dr. Destiny, is far more terrifying looking than the “old version” that Superman experienced. A common thread, Supes comments. It is quite fascinating to see such an acknowledgement – as we push forward in time these villains gather more darkness and a greater capacity for violence, but at their heart, they remain pretty much the same threat. A darker version of the same bad old dream.

Cut then to a sequence of Nightwing and Supes gliding through Dick Grayson’s working relationships and friendships, beach volleyball with the Spyral crew, as Dr. Destiny continues to stalk his old co-workers, killing them inside the dream. Cut to Bludhaven, which this version of Nightwing has visited, where Nightwing see’s Damian Wayne (Robin) and Batgirl sparring under Batman’s guidance. Now Nightwing can get into the fight, which broadens out from there leading to the exposure of Kobra operatives behind Dr. Destiny creeping into Nightwing’s mind to steal secrets. They are all caught and the good guys win. It’s all a lot to take in and not particularly well explained while also fairly heavy on the sentiment of “friends will be friends forever”, so much so I almost expected somebody to break into song!

All in all, I personally found this a slightly ham-fisted way to reintroduce Bludhaven and the change in Dick Grayson’s mind-set seemed a little jarring, but I’m probably being a little harsh. It’s a course correction long overdue. The reintroduction of Bludhaven as a potential home base for Nightwing would be a fantastic move for the character – I have a lot of faith in the creative team and firmly believe that while this might have been a filler issue, designed to give the regular artists a break, it is still an effective way to open up future changes and evolution for the Nightwing character and title. My favorite Nightwing run is definitely the long Chuck Dixon run where the character was based in Bludhaven almost exclusively, and yet still available for Bat Events – DC are making a smart move if that is where they are trying to reposition the character. Give him a city to watch over. Zero circus analogies, so that’s a start, too. Solid issue.