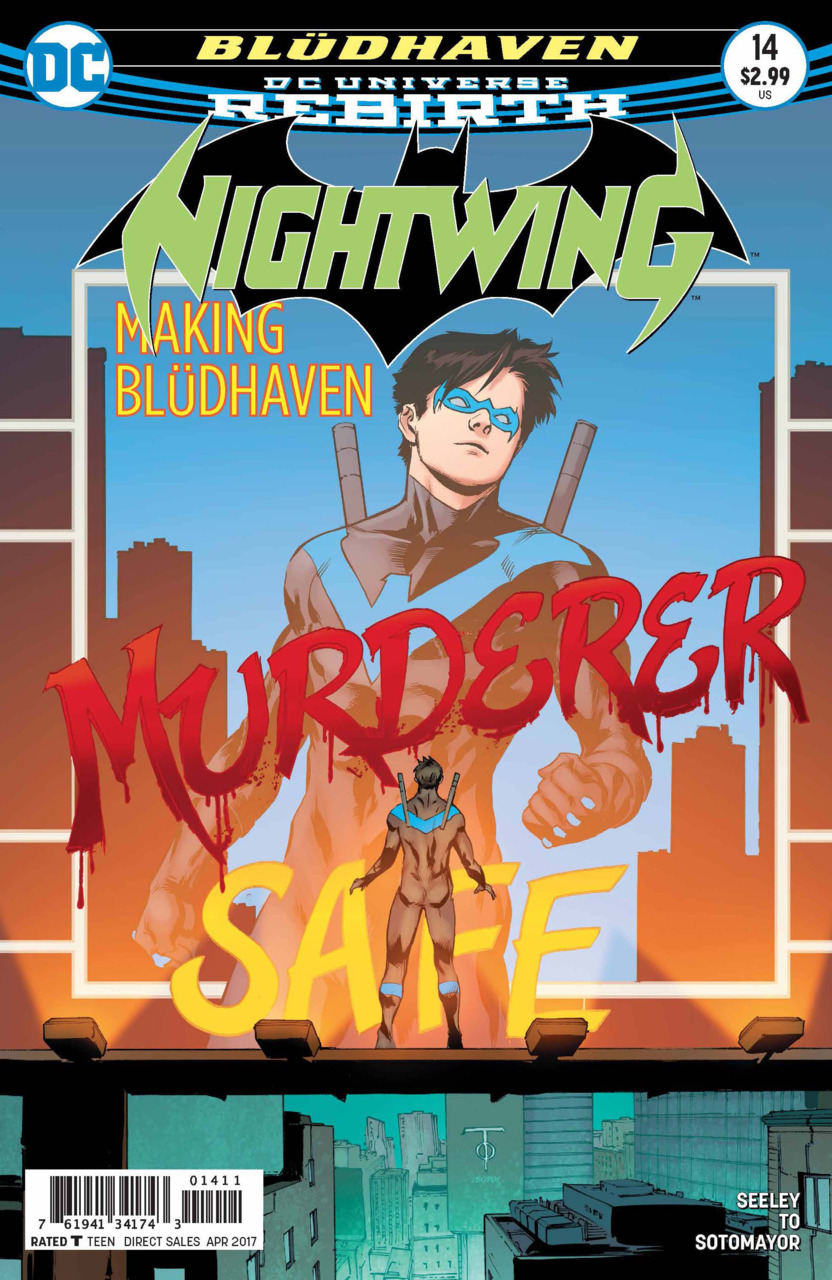 Nightwing #14 wraps up the Bludhaven arc, which has dealt with Nightwing’s arrival in the city of Bludhaven, in an effort to find some certainty for his place in the world and realign where the lines of his morality lies. As readers would know, he might have bitten off a little more than he could chew! Bludhaven simply hasn’t proven to be the simple city of black and white he imagined it to be from a distance.

This is all exemplified by the start of this issue, which finds Nightwing riding on the underside of a police car, while Shawn Tsang (aka Defacer) rides with Detective Svoboda topside, with the detective eager to take the credit for Nightwing’s work in uncovering the framing of the Run-Offs for the murder of local crime-bosses. Like any good crime story, there are layers and tentacles in this one.

Cut to a frightening scene where Mr. Nice (the holder of a name I never trusted) has the tourism manager of Bludhaven subdued after teleporting her to his hideout by the water. He has a weird and distracting habit of wearing almost perfect masks of other people while he is villain monologue mode and I had a confusing moment when he appeared to be wearing the Riddler’s face! I had a moment of thinking this story was going some weird final places, but it was only a mask. A nice piece of fan service was to see what also appeared to be the Royal Flush gang. If I’m wrong, sorry kids.

Meanwhile, the delightful detective has allowed Nightwing and Shawn to go bust open Mr. Nice by themselves, and she will swoop in to take the credit when it’s done. There’s a neat little monologue from Shawn on how in running away from Gotham and the vigilante scene she really ran away from herself and it’s what we do that matters. I also appreciate a nice little redemptive tale and this arc has that in spades.

Less redeemed is perhaps the tourism bureau lady, Cherry, who it turns out had some guilt in this matter of framing the Run-Offs specifically Gorilla Grimm, and then advertised for Nightwing to save her and the city from the despicable Mr. Nice. Mr. Nice then attacks, with a type of laser cannon (that can “burn a hole through a god” as Nice claims) he acquired on the alien black market. It’s down to man to man combat as Nightwing clashes with Mr. Nice. Shawn dives into the action and narrowly avoids getting a god-killer blast to the face.

We are then treated to a villain monologue from Mr. Nice as he has Nightwing on the ground and has pummeled him with the god stick. It’s of course all about reflections, what Nightwing sees when he looks in the vanity mirror, what Mr. Nice sees. Nightwing sees a reflection of a man and a hero questioning who to trust, somebody who has made mistakes and wants to do better. Unfortunately for Mr. Nice, what he sees is a monster, because that is what he is.

Detective Svoboda appears, blasting the mirror from Nice’s hand as he fires the god stick, ruining his own face. Nightwing performs a last second save so that Nice doesn’t tumble into the water far below. I reflected instantly that it is perhaps good that Nice already has a penchant for wearing masks that imitate others, as his own visage just took a mighty battering.

With he resolution of this arc and the clearing of the names of the Run-Offs meetings are back in order, Gorilla Grimm and Shawn freed and it’s time for a name change. Sparks are flying between Shawn and Nightwing, and I was fond of the moment where Shawn takes the first step and reveals she knows exactly who he is, just like she knew when he was Robin and she got busted the first time. Nightwing has a good reflective moment to sum it all up – he lives in a city of people, people from all over, all trying their best to make it.

A strong wrap up issue of a good arc.