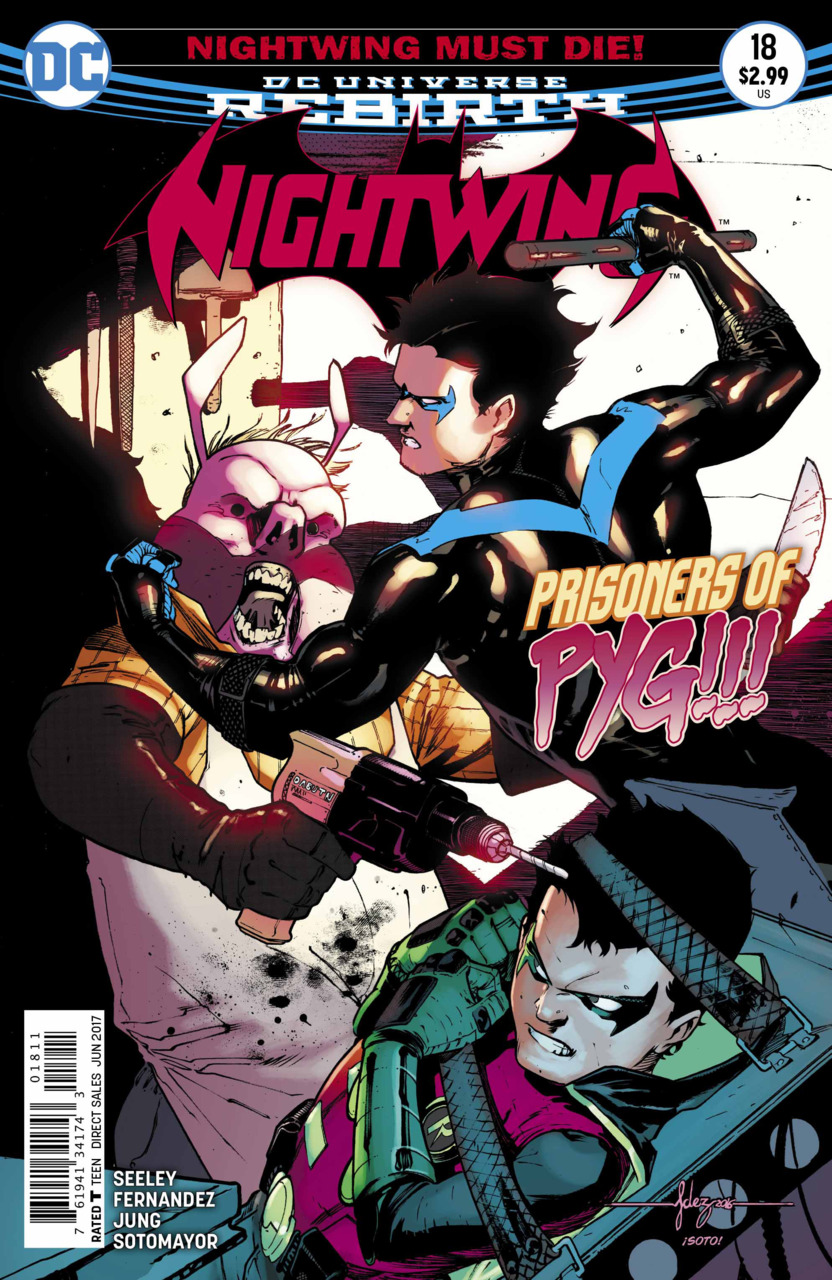 Professor Pyg is a dark subject for a dark arc, laced with the most severe trappings of the Morrison-era Batman which Tim Seeley definitely is taking narrative and thematic inspiration from in this issue of Nightwing. Picking up from the last event of issue, Nightwing and Damian Wayne aka Robin, crash Pyg’s hideout in Paris where he is busy doing what he normally does – turning people into brainwashed Dollotrons, subservient to his every whim, their original personalities replaced by perverted sick versions that Pyg seems to overlay on his victims. It’s one of the saddest kind of villains for Dick Grayson to face because they are typically without redemption, Pyg does his work too well.

This scenario is no exception. Pulled to the area by a facsimile of Robin, in reality a brain-washed boy under the mask which is slowly but surely destroying his face and mind, Dick and Damian quickly find themselves in serious hot water, battling Pyg and his brainwashed acolytes in a battle to the death. Pyg has lost none of his inherent evil, obsessed with the art of Shawn Tsang, Nightwing’s girlfriend, as he raves on about Saturnism, apparently the term for the lead poisoning which afflicted some of the great masters of art as they dabbed brushes tainted with lead on their tongues. Reading this issue, Professor Pyg has certainly dipped his tongue on a few lead tainted brushes as he’s certifiable in his mad goal to bring pain and confusion to Nightwing.

A sharp characterization of Damian Wayne as Robin shows Seeley is equally at home with that character who sings off the page. This issue is as much Damian’s as Dick Grayson’s. Meanwhile, the character termed Robin-tron, a pastiche of the actual Robin, is a blend of horror and haunting sympathy, desperately trying to break Pyg’s conditioning, doomed to die as a victim to the madness. There’s a helter skelter feel across the issue, a sense of doom and despair. There is no real hope when Dick Grayson faces Pyg, he knows all too well this is madness.

The character of Deathwing, teased issues before as potentially a multiverse evil version of Nightwing is exposed as just another fraud, a copy over some poor wretch with a distorted version of Nightwing’s history and personality. There is no redemption for him either, just a fast tracked cycle of death and doomed decisions. When Deathwing struggles against the conditioning, is the struggle even real? Does he find any of himself before he loses again? Or is the battle as fraudulent as the oh so temping promise of becoming whole again. Regardless, it ends badly for him and Robin-Tron.

In the meantime, the romantic angle is played heavy here. Nightwing was coming to rescue his girlfriend after all. And not just girlfriend, potentially the mother-to-be of his child. Fans will have to wait to see how that story plays out, but there’s definitely a sense of crisis and emotion in Dick Grayson. Pyg has gone personal, aiming to hurt and he has succeeded. The fight scene which plays out through the issue is effective but narratively overwhelmed by the heavy emotional beats surrounding it. That’s a credit to the storytelling, which is on point both visually and with words. The sparsity of the backgrounds in some panels, such as with Robin-tron, humanizes the automaton that the Dollotrons become, and serves to bring focus to the hollowness of Pyg’s work, the tragedy of it.

A sinister cameo from another Morrison-era Batman villain only makes this issue more enticing…Tim Seeley and the team have done it again. The darkening of this arc after the brighter hues of the recent Bludhaven storyline showcase another aspect of this creative team and further make the case for Nightwing to be considered one of the stronger and most consistent DC Rebirth titles.