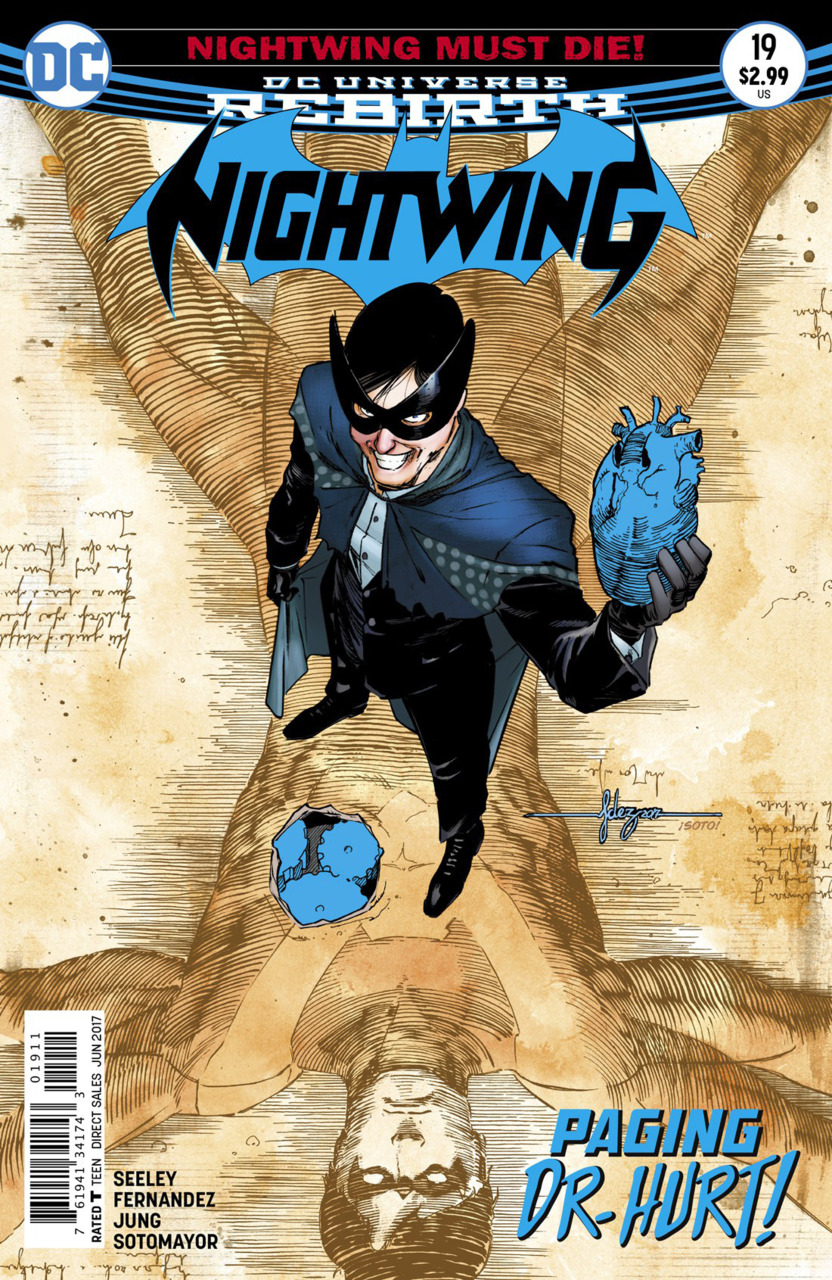 (Spoilers ahead) Nightwing #19 opens with a disguised Nightwing and Shawn trekking across the desert on the trail of the kidnapped Robin, led by a shadowy tour guide, on their way to photograph “sunrise over the ruins”. As the tour comes to an abrupt end, and the guides attack, Dick and Shawn quickly dispatch them, quickly learning that Robin is intended to be a sacrifice to some ancient death god.

Nightwing and Shawn decent into the mysterious underworld, Shawn comments on Robin Hood, Nightwing’s hero, and how he stands up for people like Dick Grayson does, moments before a staircase collapses on her, possibly killing Shawn! Deathwing appears, intent on challenging Dick. There’s some interesting dialogue from Deathwing about a blade that has cut Dick’s skin, potentially allowing him to see possible infinite futures – this does fit with the visions Nightwing experienced earlier on in the series when tussling with Deathwing, multiple versions of himself as both Robin and Nightwing. Is it a forerunner of some new infinite crisis, the blending of Watchmen into the regular DC universe as advertised, or some intimation of a new hand (possibly that of Mr. Oz) behind the scenes?

But while we speculate, the fight between the two rages on. But Deathwing doesn’t cut it hand to hand, and Nightwing gets rid of him long enough to find Shawn, holding up a massive bulk that would squash her, with her feet. Freeing her, Deathwing is upon him moments later, teasing him that just like every old fashioned hero, there is always somebody to hold Nightwing back, an individual who can be used against him. Against a magnificent background of yellow, Nightwing fights back, letting Deathwing know that the other versions of him are failed versions of his mission, where heroes fail – and that’s not the world he lives in. Nightwing brings the blade back and cuts Deathwing on the face, sending him spiraling into a world of loss and failure.

The fight ends with not a nag but a whimper as Shawn kneels beside the lost Deathwing, recognizing he’s lost and alone, and helping that kind of person is what she does. Shawn sure has some heart.

The art in the book is murky as befits this dark tale. The scares are real. Things go bump in the dark. As Nightwing descends down into the cave, the art is sinister, two rows of distorted versions of Nightwing lining the stairs. Versions of what he might have been, murmuring his name and “come see.” Of course at the bottom of his tunnel of nightmares is Dr. Hurt, the insane physician who has previously set Batman himself on a course of darkness and madness. Dr. Hurt is off the reservation, babbling about the third eye he has opened on Dick’s forehead, and how dawn is the time when the veil between the worlds is the thinnest, and when we “can best perceive the great beasts we serve.” It’s a chilling announcement, as Robin lays prostrate before him on a stone bench. He’s already cut Damian, perhaps killed him. (Although we don’t really buy that, Dr. Hurt) Nightwing staggers forward, and appears to tumble into some kind of hell, most likely a side effect of being cut by the knife…

Overall this is another good issue of Nightwing. This is a dark, intense story, similar in tone to the subdued dramatic tones of the first Nightwing arc which featured Raptor. Whilst I personally prefer the issues set in Bludhaven, this is a very assured issue and again underlines the strength of this creative team which keeps getting the ball onto the green issue after issue in a very effective way.