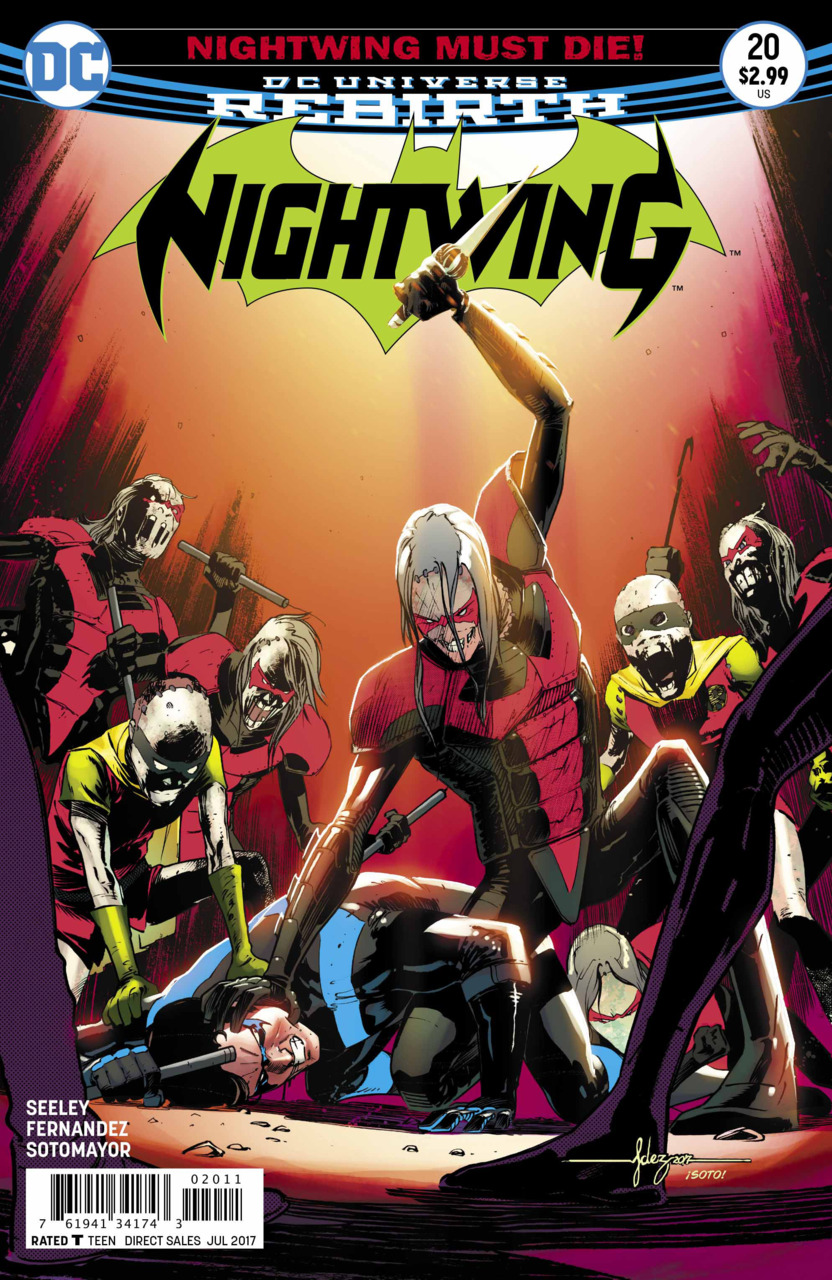 (Spoilers ahead) Every good run has its average issues. For this reviewer, Nightwing #20 definitely felt quite lackluster and devoid of much driving action – at odds with the momentum of the overall series and arc. Perhaps this is just another example of decompressed storytelling running into genuine padding. The main thrust of this issue is that Nightwing has fallen under the spell of Dr. Simon Hurt, the old enemy of Batman known to most fans from his presence in the Grant Morrison run of several years ago. (see the TBU history rundown of the character with part 1, part 2 and part 3)

The perspective of the issue shifts, not altogether coherently, between Nightwing, flashing through visions of himself as Deathwing, trying to atone for the death of Damian Wayne aka Robin at Dr. Hurt’s hands, while in reality Robin is bleeding out an altar as the insane Dr. Hurt prattles on. It’s difficult to describe what passes for the majority this issue as essential storytelling – it’s a series of meandering dream sequences that suck the drama out of the story and make the reader painfully aware that “it’s all a dream” – the abrupt shifting of perspective refuses to allow the reader to “buy into” the dreamscape and shifting realities.

Instead we are also treated to the soap opera that is the actual Deathwing’s life, and it’s a depressing vibe of a ruined life, Defacer, aka Shawn Tsang, Dick’s girlfriend, tries to talk Deathwing off his metaphorical ledge, but as a reader I felt detached from his arc, the promise of a rebirth and renewal seems empty for this character who has already lost so much, almost his whole humanity. The cuts with Dick Grayson as Deathwing only served to further confuse me – he’s fighting Nightwing, who is Damian, who we thought was dead in the dream – it’s multilayered path of confusing pages that doesn’t pay itself off emotionally. Considering the general strength of the Nightwing title since Rebirth, I don’t want to appear too critical of this slower paced issue as perhaps the fault lies in the reviewer, not the work itself. Some readers will enjoy the introspective leanings of this issue but for me, I feel burnt out on this long gloomy take and midway through the issue found myself battling to keep reading, weighed down by the lack of narrative flow.

The art is extremely competent and Javier Fernandez is cleverly using an effect to underline that the visions are part of a dreamscape, but again I questioned whether the story was able to manage these transitions without the use such an obvious filter. Perhaps I’m being too critical.

The long monologue of the Deathwing dream persona (inhabited by Dick Grayson) gives a rather lengthy monologue which again felt like padding for pages – it’s nothing we haven’t heard before and all the more grating for being inserted as a speech – to Dr. Hurt, to Dick Grayson himself, to the reader. Is anybody really enjoying such a trite summation of why Dick Grayson became Robin. If one of the cardinal rules in storytelling truly is “show don’t tell”, this particular issue arches that rule and then some. I felt like I was reading a “Who’s Who” entry as Dick Grayson clumsily pontificated through his dream and have us his reason for being, then inevitably taking out Dr. Hurt with a single punch.

That said, the closing third of the issue does offer more worth. Dr. Hurt, reduced to an evil cipher in this arc, does hint at a greater conflict, the coming of a great darkness which he has glimpsed from some underground tomb the Joker placed him in. It’s interesting to speculate what that darkness is, even as reality seemed to bounce around in this issue. Is it part of the wider ramifications from “The Button” event and a harbinger of things to come? Or it just the insane ravings of a madman and another tale of death cheated by the heroes?

Fans of Damian Wayne (and I count myself firmly in that number) will enjoy comments and banter with Dick Grayson by issues end. Even as he barely dodged death (almost literally), the Damian Wayne personality remains intact. A touching scene at the end with Nightwing reminds us “hey we’re the greatest”, and its true. I found myself wishing this issue and indeed arc was less “gritty” and “dark” and instead featured more of that precious Damian-Dick banter. I won’t give away spoilers on Shawn’s reveal, but it’s well handled and builds my affection for the character.

Overall this was a letdown from the recent quality of the Nightwing title and probably should have been condensed down – like so many stories in modern Big Two comics the need to stretch the story out didn’t serve it well. That said, I definitely am looking forward to the next issue and arc. This creative team is strong and can handle a small bump in the road.