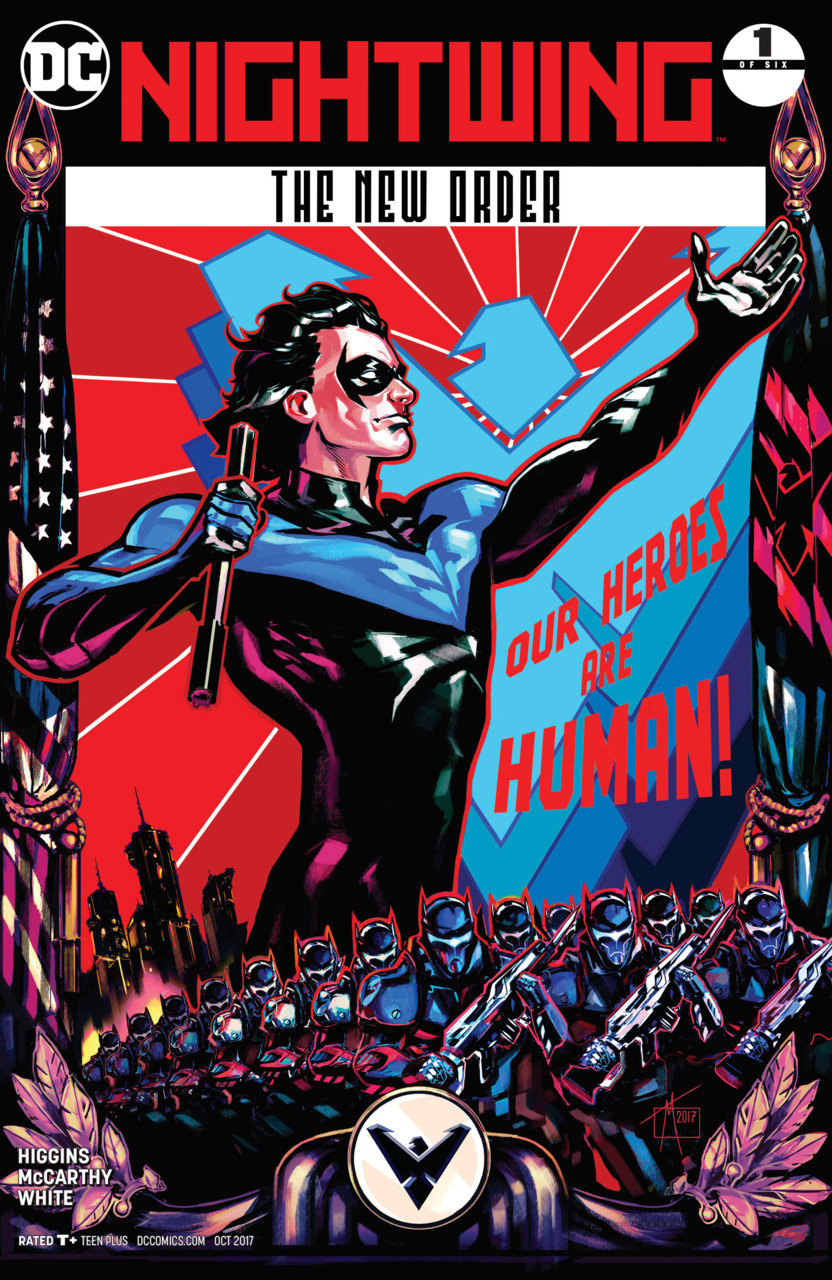 Synopsis (spoilers ahead): Twelve years ago, in Metropolis, Nightwing walks away from a huge mass of superpowered people who have apparently lost all of their powers, carrying a large device and saying he had to save the world.

Today, in 2040, Commander Dick Grayson chases the former Dr. Light through Gotham, to enforce the taking of drugs which remove superpowers. Giving a press conference, Dick affirms the importance of suppressing all powers. He speaks with his subordinate Liz, who chides him for taking point in a chase himself, and learns from another, Brady, that a large supply of their inhibitor medication has been destroyed.

Rushing home, Dick finds his son Jake cooking with Alfred Pennyworth, visiting. After Jake goes to bed, they discuss the past. Dick tries to persuade Alfred, again, that the anti-superpowers law is the best way, but Alfred cannot, even though Dick brings up Bruce’s death.

Dick says goodnight to Jake, and his son asks why he gave up being Nightwing. They discuss Dick’s role in chasing people with powers today, and Dick’s conviction that he’s doing the right thing, but lingering regret for the pain he causes.

Analysis: Kyle Higgins and Trevor McCarthy are an underrated team in the history of DC Comics. One of Scott Snyder’s earliest proteges, Higgins wrote Gates of Gotham just before the New 52 began, with McCarthy illustrating most of the issues, and then was given the Nightwing book for the first few years of the reboot, as well as an aborted run on Deathstroke. However, unlike Snyder’s later proteges James Tynion IV and Margurite Bennett, Higgins left DC for independent comics (COWL, Hadrian’s Wall) and hasn’t done much with the Big Two for years. His return to his favorite character, Dick Grayson, is a solid, though not immediately successful, effort. Though the writing displays a lot of craft, using repeated lines in a thematic way to provide structure, a lot of the emotional impact of the book is lost because of Higgins’s choice to start the story in media res, without providing the backstory he’s revealed in interviews. The lovely scenes with Alfred and Dick’s son Jake form the heart of this issue, but don’t provide enough context for why Dick made the choices he did, or why we should care.

Trevor McCarthy’s art, however, proves much stronger than the story so far. Using his stylish thick lines and heavy use of black, McCarthy and colorist Dean White create a futuristic world that’s fun without being too distracting. White also uses a lovely washed out effect in the flashback from 12 years ago that opens the issue, then shifts to the more expected sharp edged black-and-red dominated tones for the present day sections. The facial designs are particularly effective by McCarthy, from Dick’s thick mane of hair, to Alfred’s emaciated sharpness, and Jake’s smiling roundness.

Hopefully, the narrative will kick into higher gear next issue, and eschew some of the overdone narrative by Jake in this issue, which detracted from his introduction, as we still know very little about Jake at the end of the issue, despite having narration from him the entire way through.

Final Thoughts: Nightwing’s New Order is lovely to look at, but needs more fleshing out of both characters and world.