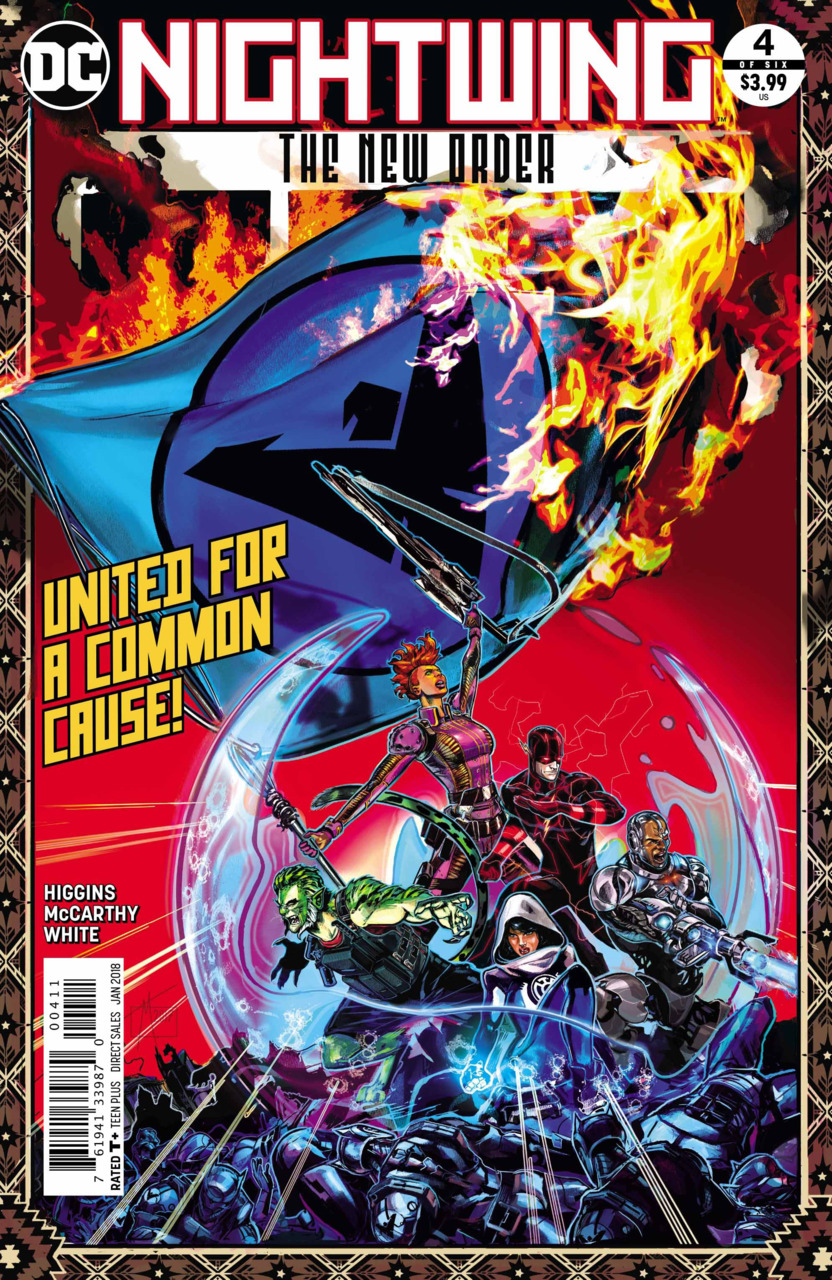 Overview: Nightwing finds surprising allies from his past as he tries to free his son from his own New Order.

Synopsis (spoilers ahead): Jake’s narration over a closeup of his blood rejecting the power-suppressant isotope tells us that relationships that lose respect for each other are doomed. Kate Kane talks to her science team, then interviews Jake herself. He asks if he’ll be frozen, and she evades the question, telling him to get ready for the tests.

Meanwhile, Dick wakes up in the captivity of the Titans – Beast Boy, Lois Lane, now a Blue Lantern, Cyborg, Wally West, and his former wife Starfire. Lois heals him with her ring, and Dick starts arguing with his past teammates, and Kory tries to reason with him for the sake of their son.

At the Crusader Headquarters, Liz Holt analyzes the information on Jake, with Brady, the guard who antagonized Dick in the second issue. Brady senses that Liz doesn’t fully believe in the Crusader cause, and threatens her for it.

The Titans and Dick emphasize what Dick knew last issue – that something about the way Kate is handling the situation with Jake doesn’t feel in character, leading them to think someone else may be behind it. They get the scans Liz was working with, indicating that Liz Holt is the Titan’s inside source. The signs point to Jake’s blood possibly being the cure to Dick’s superpower-removal weapon. As Dick reacts violently to the potential destruction of all he worked for, Lois uses the blue ring to calm him down by showing him his family – Kory and Jake, reunited and happy. When the illusion clears, Dick is even more angry, refusing Kory’s attempt to comfort him. Jake’s narration gives a quick summary of his mother’s backstory. Kory follows Dick into the next room. He confronts her with her leaving their family, but says he misses her. She refuses to respond, telling Dick that her ability to accept the New Order has changed since they were married, and instead of the love and respect she used to feel from Dick, she now only feels fear and imprisonment from the world he’s created and supports. Dick decides to work with the Titans to get their son back, and tells them where Kate will take Jake. They work to infiltrate, but with Kory depowered, she uses technology to simulate her energy blasts, getting them through the door. They find Jake, but are surprised when Kate’s defense team turns out to be Mr. Freeze.

Analysis: Kyle Higgins plays much more heavily into his future world’s effect on beloved characters in this issue, showing the Titans confronting Dick with his past choices as it affects his son. Rather than evil Reverse Flash, as we suspected last issue, Wally West has traded his yellow and red costume for a black and red one, hinting at the darkness of this future. It’s really fun seeing the little pieces that make this world different from our own – Lois Lane being a Blue Lantern, Mr. Freeze being an enormous enforcer for the police, Beast Boy caught mid-shift by Dick’s explosion. The most heartbreaking, though, is Kory, who has traded her gorgeous flowing storm of hair for a military sidewall cut. The change shows her strength, but also emphasizes her misery, as her face through Lois’s illusion of Dick and Kory’s family together again dissolves shows incredibly painfully. McCarthy really excels in this area, showing the emotions of these characters that Higgins puts them all through.

This issue marks the beginning of the second half of the series, and for the first time, a team seems to be opposing the New Order of the title, with some hope of reversing Nightwing’s blast that caused it all in the first place. Though it seems like a straightforward reversal using Jake’s blood would be a bit too simplistic for the moral complexity that Higgins has developed so far, it’s hard to see quite where things will go ultimately without knowing the secret motivation or superiors who are calling Kate Kane’s shots.

Final Thoughts: Nightwing: The New Order continues to play to its strength in showing character relationships in the future world.