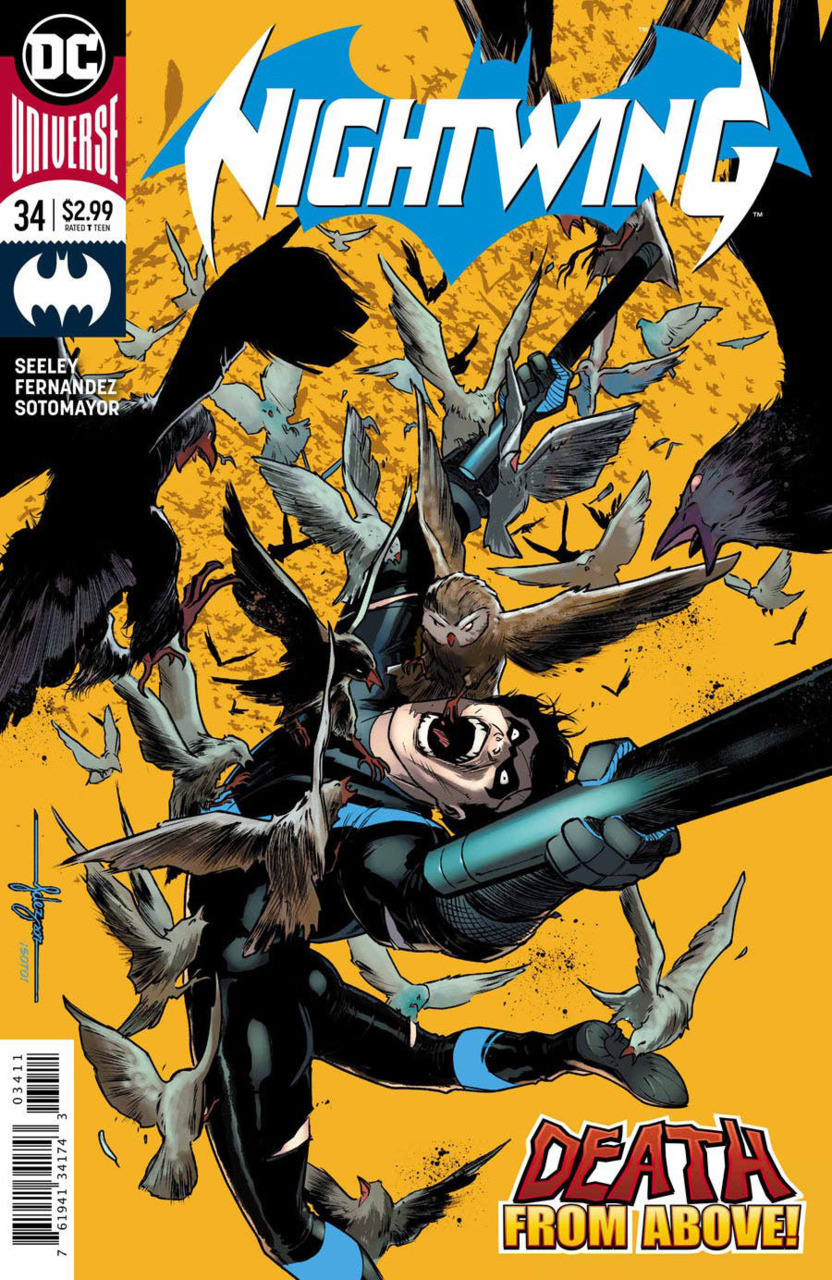 Overview: Nightwing, Blockbuster, Defacer, and the Run-Offs face off with Raptor and Pigeon for the fate of Bludhaven.

Synopsis (spoilers ahead): The issues open with Defacer narrating a recap, with Raptor and Pigeon unleashing an army of trained birds to bomb Bludhaven with Blockbuster’s monster serum with Raptor ready to unleash the serum by activating a button on his gauntlet.  Defacer and the Run-Offs work to deliver an antidote to the monsterized casino patrons that were dosed with the serum in the last issue and now are on a rampage through the city.  Meanwhile on the roof of the Marcus Casino, Raptor thinks back to his time in the circus with Nightwing’s mother, Mary, when he and Pigeon are attacked by Nightwing and Roland Desmond.

Nightwing and Raptor continue to fight as Pigeon takes Desmond down by delivering another does of the same serum that is already in his bloodstream, causing Desmond to overdose.  Pigeon is then crushed by a statue toppled over by Defacer and taken out of the fight.  Defacer comes to Nightwing’s aid as she is notified over the phone that the Run-Offs have cured the people in the casino and is then knocked out by Raptor.

Before I continue, this next section of the recap is my best guess as to what happens.  I honestly can’t tell for certain.

Raptor and Nightwing fight until they are interrupted by Blockbuster who seems to miss hitting Raptor and then crouches down to give himself his antidote to turn himself back into Desmond.  Raptor then collapses and contorts.  If anyone reading thing can explain why this happens please comment below because I’m stumped.

Desmond then offers his hand in friendship to Nightwing, who takes the opportunity to inject Desmond with the last dose of Defacer’s Anti-Blockbuster Serum, preventing Desmond from turning into Blockbuster ever again.  Nightwing and a weakened Raptor speak, and as he loses consciousness, Raptor reveals that his real name is also Richard.

Nightwing and Defacer speak, both confessing that they have missed each other and Defacer saying that she loves Nightwing too much to be with him.  Nightwing meets with the newly promoted Svoboda to discuss a new threat and the issue ends with a full-page splash of Nightwing and the Run-Offs in an action pose.

Analysis: This issue feels very much like Tim Seeley packing up his toys and leaving the playroom.  It seems pretty clear that there was probably a mandate to wipe the slate clean for the next writer coming to the book and I would not be surprised if Dick were to have an entirely new supporting cast as the new creative team takes over.

There are some aspects of Seeley’s run on the book I’ve really liked.  I thought the Simon Hurt and Deathwing stuff was great and I also enjoyed that Seeley has tried to reference what has worked for Nightwing in past comics without using it as a crutch, such as his use of Blockbuster as more of a supporting character than a big bad, and new takes on characters such as Stallion.

That all being said, this issue highlights the more problematic aspects of the title.  The biggest issue I have is with newer characters such as Raptor and Defacer/Shawn.  Seeley has been hellbent since their introduction to the title to make these characters seems to be important pieces of Dick Grayson’s world and I don’t feel that it’s been successful.

Raptor could be a great villain for Nightwing.  They’ve set up a shared history of a very personal nature between Raptor and Nightwing.  He was there the night Dick’s parents were murdered.  I think there’s a version of this character, one that had his love of Dick’s mother, Mary, that has been twisted by loss, guilt and jealousy to make the son that Mary had with another man into a source of Raptor’s rage.  That’s really interesting.  Instead we get a Raptor that is yet again busy giving Nightwing a lecture on branding and talking in broad, impersonal themes that give the story no sense of personal stakes.

I also take issue with the death by trained birds plot which doesn’t really amount to anything and is just kind of silly, but on the other hand its no dumber than the radio-controlled commando penguins from Batman Returns so I think it can get a pass.

This brings us to Shawn.  Seeley has gone to great lengths to make this an important relationship for Dick, using the cheat of moving the relationship through time in the space of a single issue and throwing in a pregnancy scare for good measure.  I don’t think there was a good enough reason given for the relationship to end the way it did and it carries through to their reuniting here.  At the end of the issue they declare their love for each other, and then Shawn spouts some nonsense about loving Dick too much to continue the relationship, which for me doesn’t feel like a legitimate reason to stay apart.  I feel like the writer knew that this relationship was done because of the creator change, but still wanted to drive home how important this relationship was in terms of his own story.

The art by Javier Fernandez is by in large great, but some panels are muddled and confusing.  As stated in the synopsis, I have no idea how Raptor was defeated.  Did Blockbuster hit him after all?  Did he have a stroke?  Similarly, Pigeon’s fate is unclear.  A stone statue is pushed on top of her by Defacer.  Did she die?  I have no idea.  I wonder if its more an issue of plotting, where too much story had to be wrapped up in a single issue so the art suffered.  Another example of this is the Run-Offs curing the casino patrons off panel via a phone call.

Final Thoughts: It’s a shame that Tim Seeley’s time on the book had to end this way, because there were elements in the series that worked very well, but very few of those elements came to play in this finale.  Dick Grayson is a fantastic character that deserves better than what’s been given here.  I look forward to what Sam Humphries and Bernard Chang are cooking up for the series going forward.