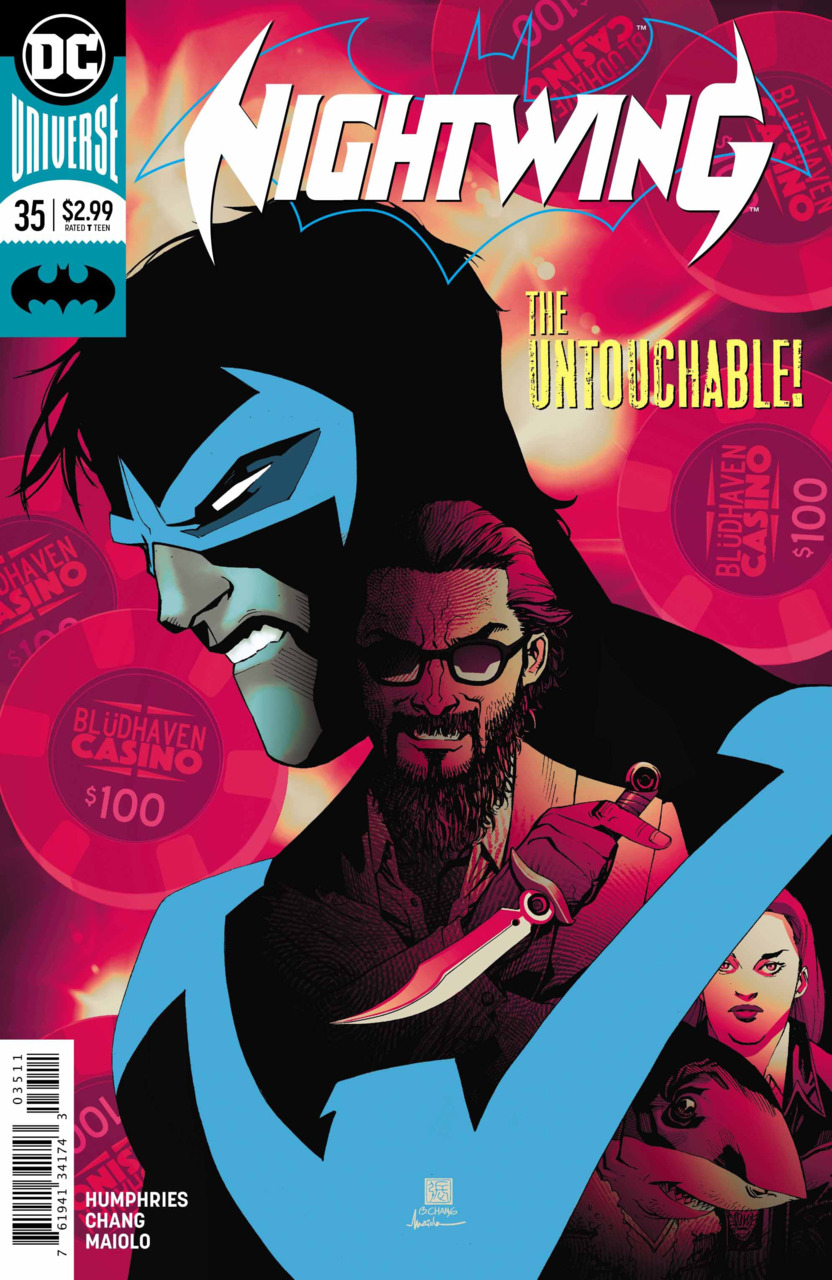 Overview: A new villain from Nightwing’s past surfaces when the Judge comes to Bludhaven.

Synopsis (spoilers ahead): The issue opens with a mysterious man in sunglasses and a beard sitting in a casino at a blackjack table with a elderly woman and a mutated shark-boy named Guppy.  The bearded man says something quietly to the woman, who then picks up a knife and stabs the blackjack dealer.

Meanwhile Nightwing faces off with the “League of Limousine Assassins”, a group of killers dressed like chauffeur’s who were drinking wine as they mow down pedestrians in a stretch-hummer.  Nightwing takes down the group in their vehicle, which loses control and crashes into the Bludhaven “Justice Tree” an old tree that was used as a in colonial times.  Nightwing meets with Detective Svoboda as a nearby tv broadcasts the Mayor of Bludhaven making an anti-Nightwing speech before Nightwing leaves for his new living and working space, where Dick Grayson has opened a CrossFit gym.  Dick starts training a pair of new clients as the radio in Nightwing’s mask goes off, with Svoboda asking Nightwing for help.

Nightwing then tracks Guppy to underneath the Bludhaven Pier to investigate the casino stabbing.  Guppy explains that he had only met the bearded man earlier in the night and that the man invited Guppy out of the town and the man disappeared after the stabbing.  Guppy goes on to mention that the bearded man had uses several names during the night which Nightwing recognizes as United States Supreme Court Judges.  Nightwing flashes back to his days as Robin and as a young man attended Hudson University and states that there have now been 13 murders that he has failed to stop and wonders if someone named “The Judge” has returned.

The issue ends with Nightwing meeting with Detective Svoboda on the roof of the Bludhaven Police Department, only to have Svoboda pull out her firearm and shoot Nightwing in the chest, causing him to fall off the roof.

Analysis: This issue marks a new beginning as the new creative team of writer Sam Humphries and artist Bernard Chang start their run on the title.  There is a clear shift in tone in this book but without throwing out everything that the previous team set up, keeping Bludhaven the gaudy neon town that gives it its own sense of identity.

The tone of this issue is actually hard to describe.  It’s like a crime drama filtered through at funhouse mirror.  There are gangsters and casinos, but at the blackjack table is a homeless mutant shark-boy with a bad teenage mustache.  The closest thing I can actually think to compare it to is the pop art quality to the book that Grant Morrison and Frank Quitely brought to their run on Batman and Robin, which funnily enough featured Dick Grayson as Batman.  Its an interesting tone and makes the book a fun read.

The jury is still out for me on the Judge as the new villain of this book.  There’s nothing particularly visually interesting about the character thus far and apart name dropping famous judges, there’s nothing that suggests why he’s called the Judge.  By the same token, I’m glad that they didn’t make the decision to have the character show up in a black robe and start banging a gavel and I like the fact that I don’t have any sense of where they are going with this character.  I do like that they are pulling from Dick’s time as Robin for this villain and I especially like that Humphries is going to be digging into Dick’s time as a student at Hudson University, which is a time period that has seldom been referenced in comics since Dick went to college in the Batman comics of the late 70s and early 80s.

Humphries also gives Dick a new headquarters and day job.  One of the things I’ve liked about Nightwing comics is that Dick is a hero that actually tries to have a life outside of the tights and domino mask.  I’ve always taken it as a lesson. Dick has learned by growing up watching Batman having no real life beyond his mission and I’ve always enjoyed watching Dick go his own way.  While it was fun to see him as a bartender, police officer, and other various jobs throughout the years, Dick’s day jobs have always seemed like a means to get information and work the same cases from another angle during the day.  Dick Grayson’s new job as a gym owner and fitness trainer feels like the first time that Dick has picked a day job that seems to be just something that he wanted to do with his life.  It’s a job that plays into the athletic nature of the character and also serves as a perfect cover for the training he would have to do to stay in shape.

Bernard Chang’s art is visually striking and along with Marcelo Maiolo’s colors, gives the story a cool vibe that feels a little like a comic adaptation of a Grand Theft Auto game.  The action is well staged and I appreciate little touches such as showing the layout of Dick’s new base in a single small panel in the middle of a page.  I also enjoyed the decision to throw Dick into what looks to be his original Robin outfit in the brief flashbacks.

Final Thoughts: This book is a cool and crazy crime comic and I can’t wait for the next issue.