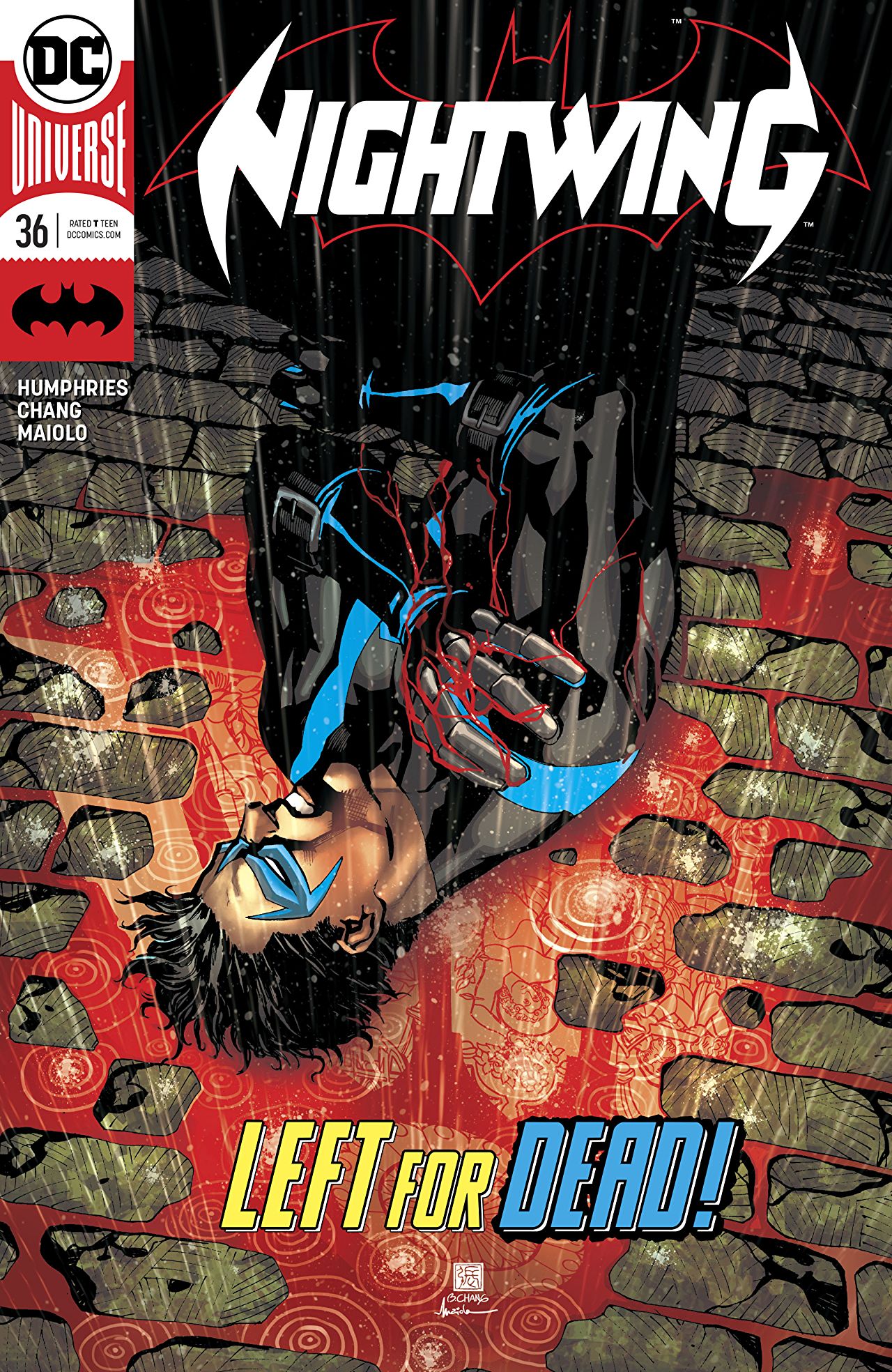 Overview: A wounded Nightwing tears through the Bludhaven underworld while the Judge stays one step ahead of him.

Synopsis (spoilers ahead): The issue opens in the Bludhaven Mayor’s Office where Mayor Madrigal is visited by the Judge.  Meanwhile, Nightwing is falling from the top of Police Headquarters after being shot by Detective Svoboda.  Nightwing manages to swing to a nearby roof but is badly injured and has to activate the defibrillator in his suit.

At the harbor, mutant shark-boy Guppy is bilked out of his share following a job with a group of criminals and pushed off the pier.

Nightwing patches up his bleeding shoulder while speaking over the radio to Alfred and then tracks the Judge to St. Jude’s Monastery where he finds the church to be littered with the bodies of dead monks.  Nightwing finds a monk, under the influence of the Judge, holding a knife who states that he killed them all.

Back at the Mayor’s Office, the Judge recounts how he used his influence on the Mayor’s various staff members to gain access to the office.  The Judge explains that he offers everyone what they really want and proceeds to tell the Mayor that his wish is to not be mayor anymore.

Nightwing tears his way through the criminal element of Bludhaven and learns that the Judge is at City Hall.  At the Mayor’s Office, the Mayor admits he feels trapped by the corrupt life he leads and the Judge offer’s him a way out.  Meanwhile, Guppy returns home, with his Father, also a mutant shark man, in bed and hooked up to an IV, with Guppy lying about his success and promising to get his father the medication he needs.

Nightwing saves one of the Mayor’s staff members, under the Judge’s influence, who tried to kill herself by jumping off a building.  Nightwing then finds Mayor Madrigal in his office, dead from an apparent self-inflicted gunshot wound.

In the morning, Dick is at his gym with his 5AM class when a news report shows casinos being raided following documents released by the Mayor indicating widespread corruption.  The story ends with the Judge standing in front of the Bludhaven Justice Tree with Dick’s voiceover, realizing that the Judge is in Bludhaven to stay.

Analysis: Writer Sam Humphries and artist Bernard Chang move into the meat of their first story with this issue.  Humphries does a great job of building a sense of urgency with a wounded Nightwing trying to find the Judge, with a rapidly rising body count making it clear that the longer the Judge is out there, more people are going to die.  There is a feeling of dread that moves through this book, with moments like the reveal of the dead monks at the monastery feeling truly gruesome.  It also is very successful at giving a new villain like the Judge a real sense of history with Nightwing, which is a neat trick for a character we’ve never heard of before.

Although still a mystery, the book spends a fair amount of time with the Judge as he has his private meeting with the mayor.  The Judge seems to be something of a satanic character, offering deals and tempting people with their heart’s desires for his own end.  There’s something very compelling about this take on the old comic book trope of a mind control villain, where the Judge’s gift is more about influence then control.  The idea that the Judge is more bringing out thoughts and actions that were already there then to simply just make seemingly normal people do random bad acts is interesting.  There’s a lot of potential in a character with an ability like that and I’m looking forward to the potential of seeing how the Judge and Dick have interacted in the past, and the potential to see what Dick has been influenced to do in past meetings with the Judge.

Humphries seems to have a good handle on Dick Grayson, and I enjoyed the efficient references to his past in the circus in a way that felt organic and not forced in.  Having Grayson think back to his time as an aerialist in trying to survive a fall was well executed.  I also appreciated Alfred coming online to check on Dick.  While I think its important for Nightwing to have its own supporting cast, having a character like Alfred check in from time to time is a nice bit of connective tissue to the greater Batman Universe.

I’m curious to see where the creators are going with the character of Guppy.  The down on his luck criminal shark boy storyline is frankly bonkers in the best possible way.  There’s a part of me that hopes that we are seeing a major criminal player in the making, starting the character off as sympathetic before Guppy does something desperate and terrible he can’t be redeemed from.

I love the art by Bernard Chang, who along with colorist Marcelo Maiolo, makes Bludhaven feel like a dirty alley off of the Vegas Strip.  Bludhaven has traditionally felt like it was nothing more then the Gotham’s grimy little brother and the big success of Tim Seeley’s run on the book was in giving Bludhaven a more unique identity in the DC Universe.  I like how this book’s new creative team has taken that particular ball and ran with it.

Final Thoughts: Humphries and Chang have turned Nightwing into a neon tinted noir thriller and frankly, Nightwing hasn’t been this good in years.  More please.