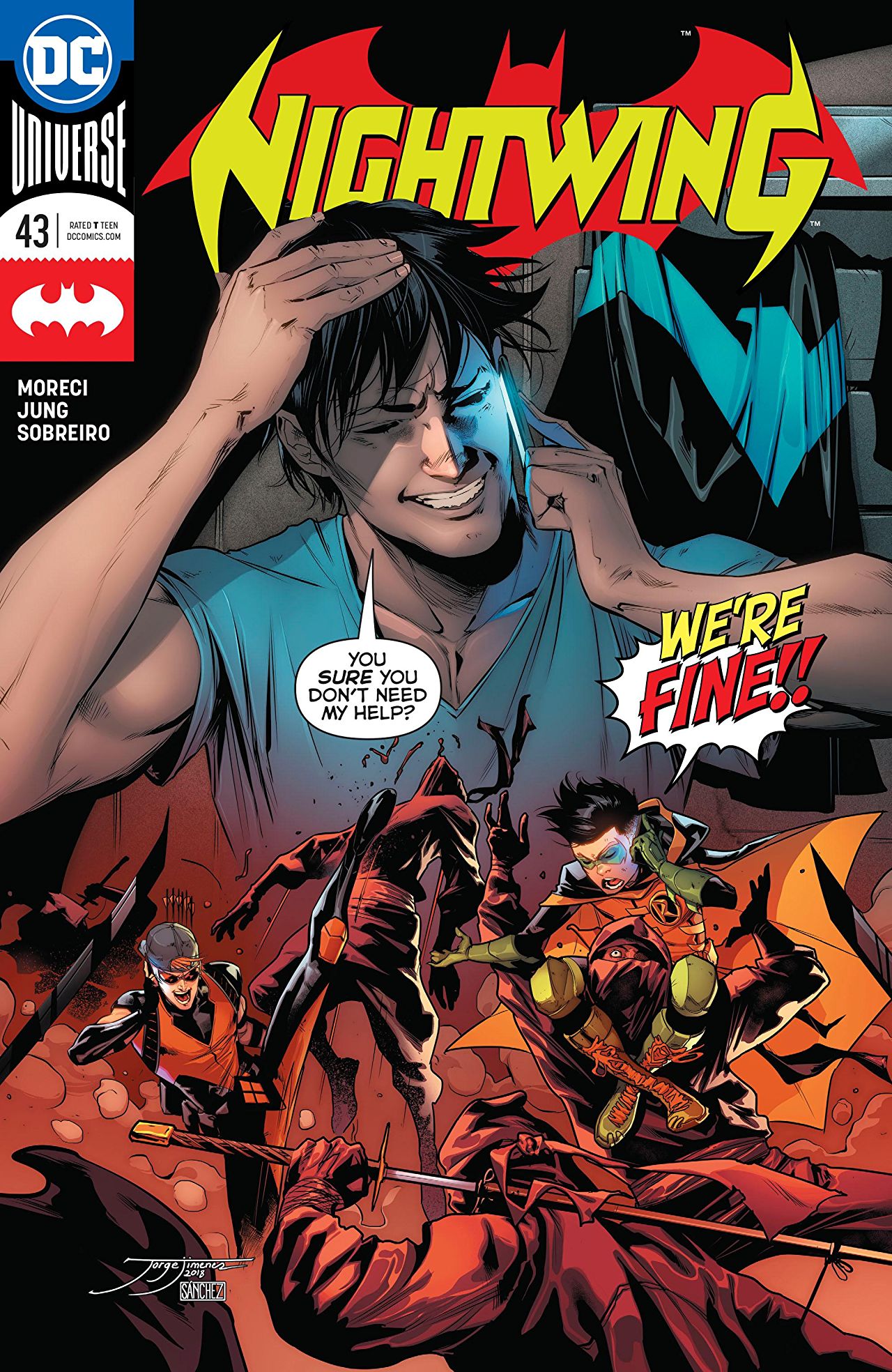 Overview: Nightwing’s quiet evening at home is interrupted when Robin and Arsenal ask for his help with a mission.

Synopsis (spoilers ahead): Dick Grayson is home at his apartment trying to set up his Netflix account when he is interrupted by Robin, aka Damian Wayne, who calls and asks for his help with a mission against the League of Assassins.  That conversation is then interrupted by Nightwing’s pal Arsenal who texts Dick to also ask for his help in Gotham.

Nightwing suits up and the story cuts to the Gotham waterfront where Nightwing is fighting a group of ninjas, only to be joined by Robin and Arsenal who discover much to their dismay that they are on the same mission.

They board a cargo ship and are greeted by Arsenal’s sometimes girlfriend, Cheshire, who along with the League of Assassins plans to unleash a weapon of mass destruction on Gotham City.  Cheshire and her assassins disappear in a puff of smoke.

Nightwing and his companions track Cheshire to Gotham Labs where Cheshire has activated the weapon which will render Gotham’s air unbreathable in about an hour.  Nightwing and Robin fight off Cheshire and the ninjas while Arsenal overloads the weapon.  Nightwing knocks Cheshire into the energy beam of the weapon, incapacitating her, and Nightwing throws the overloading weapon into the air as Arsenal shoots it with an arrow to force it into the air and the weapon explodes safety in the Gotham sky.  The story ends with Nightwing, in costume, taking the night off in Bludhaven as he watches Robin and Arsenal take on criminals while he watches with a bag of popcorn.

Analysis: Much like the last issue, this is a self-contained fill-in issue as the new regular creative team takes over next issue.  Issues like this are often forgettable, as they, by their very nature can’t really have any stakes or lasting consequences for the characters.  That being said, I thought this issue was well executed.  Writer Michael Moreci chooses to tell a “day in the life” style story, which is a lot of fun.  We often check in with superheroes on the particularly bad days of their careers and I think there is some value in telling a smaller story.  I guarantee you that Nightwing’s most regular day is more interesting than yours or mine.

One of the big differences that between Dick Grayson and his mentor that I’ve always enjoyed is that unlike Batman, Nightwing has no trouble maintaining something of a personal life.  I like the notion of Nightwing wanting to take a night off from crime fighting, even if he does feel guilty doing it.   The notion of Dick’s personal life is highlighted by having him drop everything to help out one of his oldest childhood friends and his surrogate little brother.  Arsenal isn’t a character I have any particular love for but I do enjoy having Dick interact with him and the other Titans because I like the history between the characters (although I personally would have preferred Wally West showing up).

As for Robin, going back to Grant Morrison’s run on Batman and Robin, Damian is never better than when he’s paired with Dick Grayson and there’s a fun bratty little brother dynamic between the two of them.  Damian is a character that needs a counterbalance to keep him from seeming like a one-dimensional jerk, and as DC appears to have no interest in having Batman and Robin be a thing that happens on a regular basis, so it is nice to see a version of that team show up here.

I will say that the plot to the story is a bit wafer thin and I don’t buy that either Nightwing can throw the weapon’s cylinder high enough or that one of Roy’s arrows would get the weapon high enough into the air to have it not level a building or two, but given the limited space to tell the story, it’s a cheat I can live with.

The art, by Minkyu Jung, is a good fit for the action-heavy issue.  It’s cartoony but still with a good sense of anatomy and detail that gives the action scenes a feeling of motion that I appreciated.  I think that Jung is a great fit for Nightwing and I hope that we see more of him on this title.

Final Thoughts: Some of my favorite issues of Batman are the standalone issues that Alan Grant and Norm Breyfogle tended to favor in the early 90s.  Those stories were more about the character than about plot and this story reminded me of those issues.  Monthly comics seems to be focused on 6-12 issue epics that play better when collected in a trade and while those are great too, they don’t all need to be big long-form stories.  I hope to see more stories like this in the future.