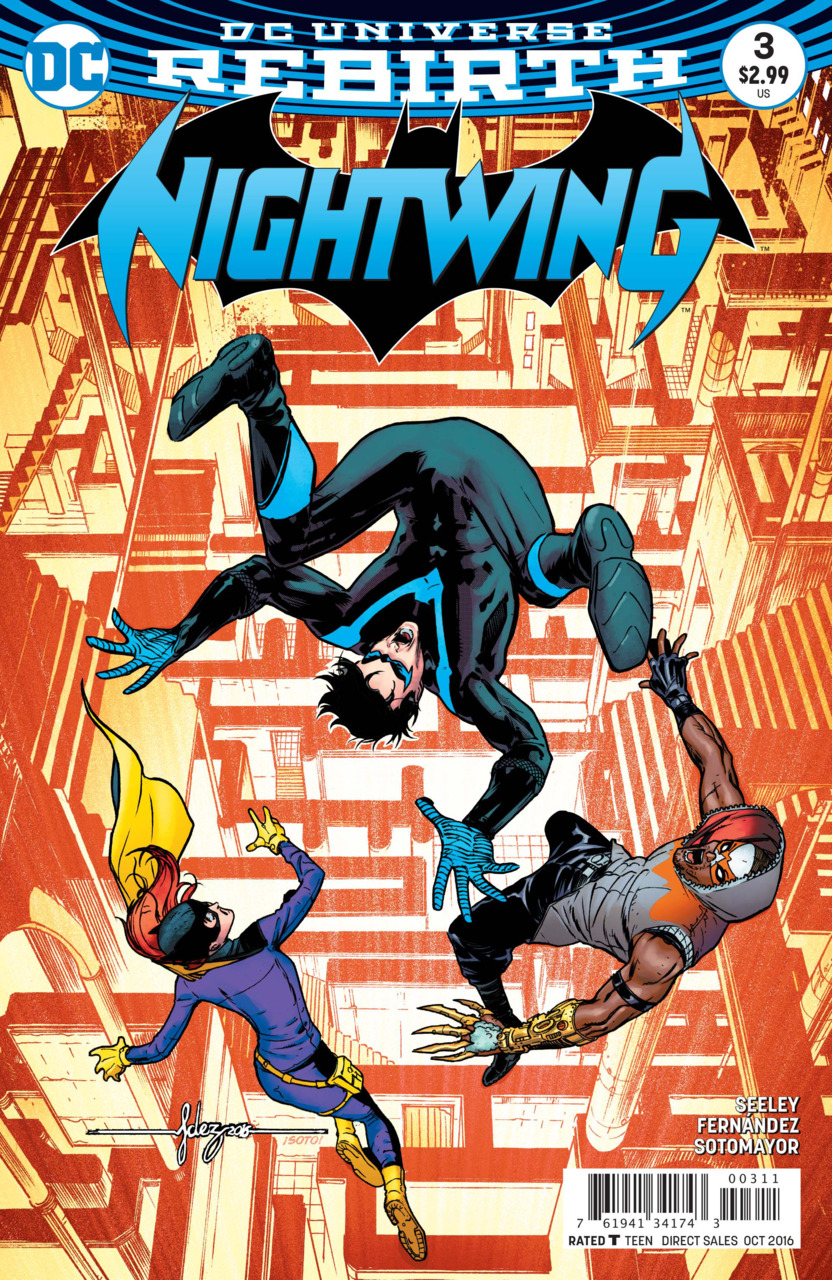 Nightwing has been a title hot out of the gate in DC Rebirth, and Nightwing #3 does not slow that momentum. Picking up in media res, as Raptor stands over a bleeding prone body, we see Batgirl accusing Dick Grayson/Nightwing that has let “an innocent man die!”

Cutting back to Norway and slightly earlier, Raptor and Nightwing are in Norway about to infiltrate the home of Krute Ruud, a famous reclusive designer of mazes. Just before they can begin, Batgirl appears, smacking Raptor to the ground and quarrelling with Nightwing for breaking their date in Japan last issue and his reckless actions in trying to infiltrate the Parliament of Owls all by his lonesome. Considering just how terrible his level of cover is, I have to agree with Babs.

This issue we are treated to another rendition of the “acrobat metaphor”, as Batgirl tells him he swings out so far he might never swing back. It must be galling for Dick to hear his personal inner monologues thrown back in his face, but that’s the price for constantly telling everybody you were an acrobat.

Nightwing discloses that in the bottom of Ruud’s house is apparently a blueprint for the Parliament’s HQ in Crete, which can put them all in prison. Batgirl, who looks stylish and fantastic with Javier Fernandez on art, states that at the least, they can do superhero stuff.

Getting into the house quite easily, there is a particularly sweet double page of art which breaks up the trio’s adventures as they run the gauntlet of traps, with Nightwing philosophizing about his attachment to the Robin Hood myth. Again, Dick’s background in the circus assists (drink for mentions of the circus in this title) as a background in tarot reading assists them get through the last trap before piercing the lower level of the house.

Sadly Raptor has cut the lights and run off first, cuing Batgirl to mention how much she neither trusts nor likes him, a motion I second, only to find Raptor standing over a lifeless body, as per the start of the issue. Nightwing is quick to knock Raptor down with the old left to the jaw, and we see that the Parliament of Owls is watching the whole thing via video link as Dick Grayson lays a fairly brutal smackdown on Raptor including putting his head through a TV which causes a shard of glass to be stuck in Raptor’s neck, which somehow doesn’t sever an artery.

It then turns out the “dead body” is in fact perfectly alive and is that of Knute (who seems to perhaps be a child, judging by the art?) covered in Raptor’s blood and pretending to be dead to fool the Parliament, who had been bragging on the video link about how this event would sever Nightwing utterly from the Bat-Family.

With the blueprint now recovered from Knute, Nightwing attempts to placate Barbara that everything worked out fine, but she’s not buying it and gives him a lecture about how far off the reservation Nightwing is headed before leaving on her motorbike. Sans Batgirl, Raptor and Nightwing head back to Raptor’s base in Turkey where he has imprisoned, a Dr Levictus, apparently an auditor who maintains the paper records of who-gives-what to the Parliament of Owls treasury.

This is a very stylish issue which showcases the fantastic art of Javier Fernandez, who really shows a wonderful level of detail in both his buildings and character expressions. His Batgirl is exceptional. The building and room details really shine inside the “maze house” and deserve special mention.

It was fantastic to see the Barbara-Dick Grayson dynamic be explored inside the story here, something that felt so lacking in the last few years.  They need actual time on page to build the relationship. Judging from what we’ve seen so far in this title I think we can expect a fairly dynamic cast and character set, and whilst Babs may have exited stage left on her motorbike this issue, I’m sure we will see her again in an arc or two. It’s great to see her operating with such agency. Her appearance made me think of timelines. If Batgirl is in Asia in her own title and operating outside of Gotham as she mentioned earlier, I wonder if this title is running concurrent to Batgirl, whereas the tile Batgirl and the Birds of Prey is post her adventures in Asia. I have no idea and I guess it doesn’t really matter, so there it lays.

On a final note, the old rule “Batman doesn’t kill, but will cripple”, which always seems to extend to most of the Bat-Family outside of Huntress (and is certainly at least something Barbara has always adhered to) certainly does get tested in this issue. When Nightwing slams Raptor into the TV and embeds a shard of glass in his neck, there is a panel showing Dick and Bab’s shock, but should they really be so shocked to have just dodged that bullet? It’s not even an act of self defense, it’s one of anger. It’s almost a what-if story in my mind, if Raptor had actually bleed on the floor, a chunk of glass in his neck. Nightwing: Murderer.

Luckily for Nightwing and for us, that didn’t happen. Keep an eye on this title, it’s a climber.