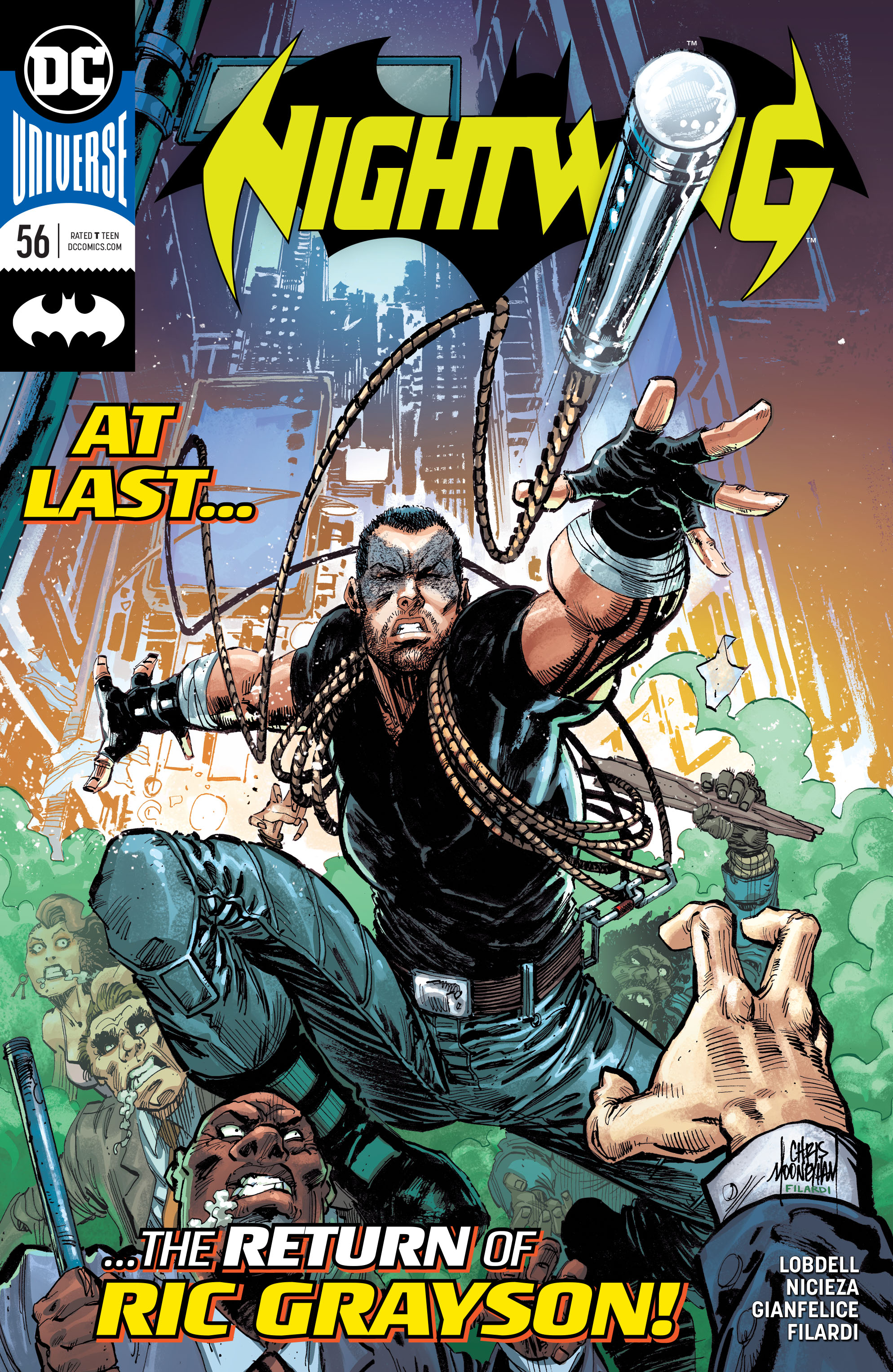 Overview: A fight with Scarecrow in the streets of Bludhaven brings Ric into close contact with the team of Nightwings.  Meanwhile, a mysterious observer lurks in the shadows.

Synopsis (spoilers ahead): The issue starts off in the middle of the action where Scarecrow is releasing his fear gas into a crowd as the band of Nightwings try to stop him.  Scarecrow unleashes his mob on the Nightwings as they try and fight their way to Scarecrow.  While this action unfolds on the street, an unknown individual watches from a rooftop and says how much they love Bludhaven already.

Ric Grayson races back to his cab with the intention of going to get Bea to safety.  As he’s about to get in, he sees the fight happening down the street.  He hesitates, uncertain on what he should do.  While he debates with himself, he sees one of the Nightwings get shot.  That spurs him to get involved by tying a smoking tire to the hood of his taxi and driving through the crowd influenced by the fear toxin.  One of the Nightwings, Hutch, explains that the smoke counteracts the effects of the fear gas.

As Svoboda leaves, she warns them to stay out of her way and the Nightwings discuss if they are officially a team now.

Analysis: There’s not a lot that happens in this issue as most of it is just a fight sequence, but the one thing it does accomplish is bringing Ric back into closer contact with the Nightwing persona.  I also liked how we got to see a lot of these supporting characters developed more.  It would be nice to see them stick around after this story arc even if none of them are wearing a costume anymore.

Unfortunately, the rest of the issue has a few inconsistencies with the plot and the writing that really took me out of the story.  For starters, Scarecrow’s motives seem to change from issue to issue. We keep hearing different reasons for why he is in Bludhaven.  Perhaps the character himself is confused but it doesn’t read that way.  Second, the dialogue is incredibly cheesy in some places, most notably on the pages where Ric starts fighting Scarecrow and when Ric and Sapienza knock Scarecrow out.

I also really don’t like how Ric feels like he constantly has to talk out loud to himself about not having memories.  The page where he first gets to his cab is a good example.  He gets there and feels the need to talk out loud to himself about not knowing if that’s the longest five blocks he’s ever walked because he doesn’t have his memories.  It comes off as pure exposition for the reader’s benefit and it’s not needed because every issue has multiple reminders that Ric has lost his memories.

I’d also like to know how Svoboda arrived right at the perfect moment when she was incapacitated on the floor of Crane’s apartment right before the fight (see Nightwing #55).  It’s possible her taking Scarecrow into “custody” is a disguise for her being controlled by Scarecrow and getting him away from the Nightwings, but I doubt it because this story arc is presumably finished with this issue.  Also, not that Joker’s Daughter is a popular character or anything, but what is the point of having a character in the shadows in the story only to spoil it with the caption for the next issue?  Seems to defeat the purpose of not showing the character.  And finally, Bea seems to be lost in the shuffle here.  Ric was going to rush back to help her escape being barricaded in a room with a crazed mob outside.  By the end of this issue, he seems to have forgotten all about that.

While the art is decent, I really like how Filardi colors the issue.  Every page has a unique character and texture that contributes positively to the reading experience.  Gianfelice’s style is similar to Brown’s who worked on the series earlier so it’s good to see some attempt to keep the style consistent.

Final Thoughts: A disappointing and rushed conclusion to a story that has been built up over several weeks.