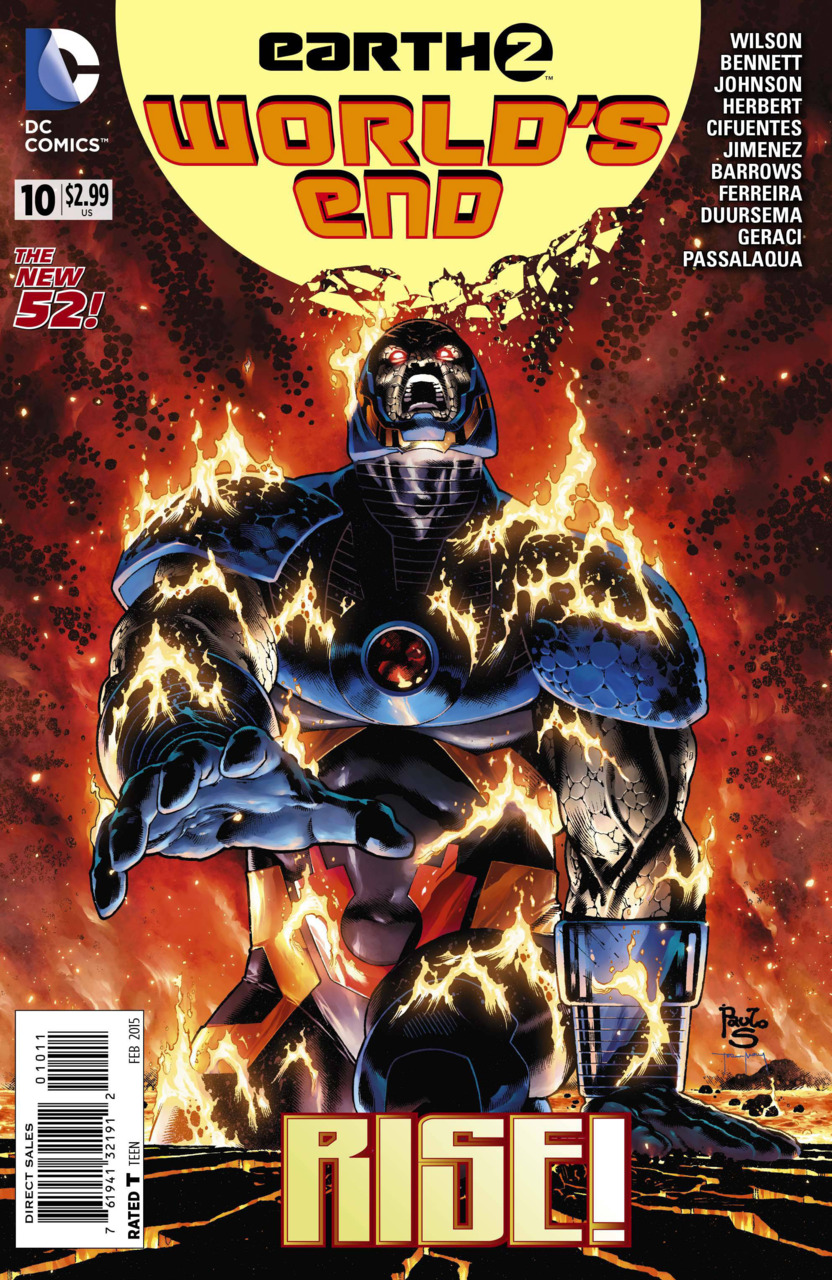 So I’m gonna try something different this time around with my review, I’ll focus on the Batman characters in a bit of detail and then bullet point what’s happening throughout the rest of the book.

Our issues open up with Desaad torturing Helena Wayne and telling her that he has plans for her. We then cut to Batman (Thomas Wayne), Red Tornado, Power Girl and Val Zod as they continue their search through the bowels of the fire pit in search of Huntress. Thomas bemoans the fact that his miraclo was destroyed by Val and angrily pushes him into a container nearby. This causes the cloned Supermen to come active and start attacking the group. After defeating them, Red Tornado discovers Superman’s shield being kept inside a display case…she breaks it opens and wonders why it was kept and if Superman could somehow still be alive, the moment is broken when suddenly Thomas sees Helena’s heart rate flat line (in the previous issues he had revealed that he had placed sometime of sensor on her to track her). The group comes to the conclusion that Huntress has fallen under Desaad’s torture. Continuing through the tunnels, the group stumbles upon another shocking discovery…the unconscious form of Kal-El, Superman. Red Tornado manages to rouse him and Batman wonders what has been happening to him since his disappearance…the mood is once again abruptly torn apart when Helena reappears, however she is now clad in the garb of a Fury of Apokolips. This story closes out with Helena lunging forward to battle the group of heroes.

Elsewhere in Chicago, the gathered population fights against some unsavory people as Barbara and Dick Grayson lead everyone to safety. However as shards of the moon (see below) rain down on them, Barbara is engulfed in an explosion…to find out what happens check out Earth 2 #29. However, it turns out that story isn’t important as we find Babs, Dick and their son trying to escape on a train. John Constantine shows up, with some recruited meta humans and helps to take out the crazy people. During the chaos, Babs ends up taking a bullet and presumably dying. Dick puts his son in Constantine’s care in order to get his son out of the city while he deals with Babs’ body.

Elsewhere in the issues, the avatars of the Earth come together and battle against the Furies of Apokolips and Green Lantern tries to come to grips with his dead boyfriend being the avatar of the Air. Doctor Fate ends up merging the helmet of fate with a motherbox and the fusion grants Jimmy Olsen “godlike” powers. The World Army ends up launching their invasion to Apokolips, but a large boom tube opens and Apokolips arrives in the same location as the moon…shattering it to pieces. The Flash ends up battling against Hawkgirl who is possessed by a rage induced by the Furies…she is saved when Jimmy and Doctor Fate arrive. Finally, the issues close with Mister Miracle searching for Darkseid on Apokolips…he finds him, but Mr. Terrific’s boom spheres end up awakening the God of Evil.

Unfortunately these issues are still suffering from storylines jumping all over the place. Unlike Batman Eternal or Futures End which seem to have found their groove, Earth 2: World’s End can’t seem to find a focus on which story to tell. Either they have too many stories or need to find a better way to tell them.

I do like the issues in general; however they simply focus a lot on the events taking place and lack in character moments. It was a little sad to see Barbara Gordon die, but Dick had a quick reaction and then we jumped to another event. The end goal is starting to get a little clearer as Darkseid has finally made his appearance, but the reasons behind everything are still a little murky.

Honestly the best part of these stories is the art…everything looks wonderful to look it, but I have to wonder why an army of artists is needed to finish up these issues.

Overall this a middle of the road story, unless you’re a completist and want to know in detail what’s happening on Earth 2, one can safely skip this series and focus on more streamlined Batman stories.