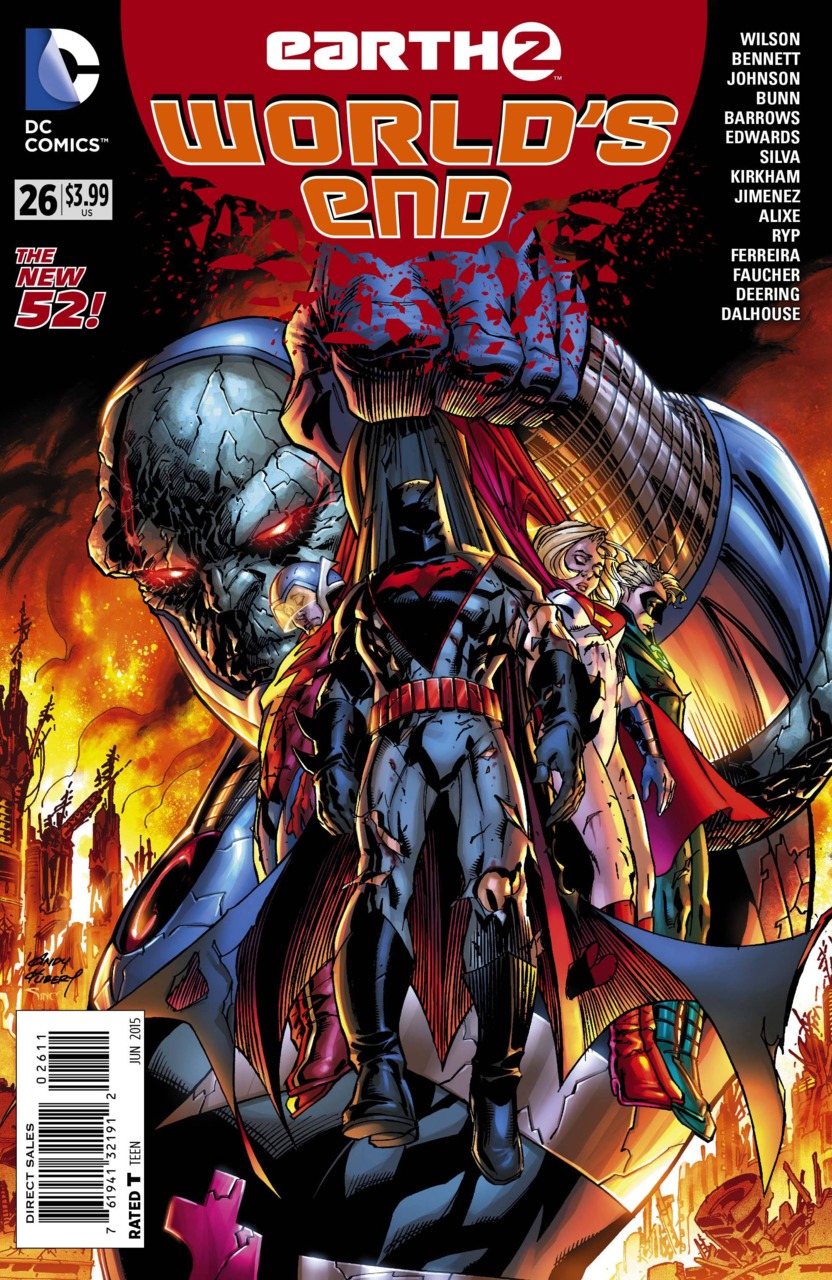 DC’s third weekly has finally come to a close with World’s End #26. And the title certainly didn’t bury the lead. As our heroes are split between doing all they can to ensure a future for the citizens of Earth 2, keeping everyone from full scale planet, and fighting off the forces of Darkseid. Power Girl and Superman take to the sky to help out Green Lantern who is also the last avatar of the earth. Batman, Oliver Queen, and Huntress are doing all they can to protect the precious package that Bruce Wayne left behind which will be able to rebuild life on Earth-2 completely. Mr. Terrific, Mister Miracle, John Constantine of Earth 1, and Fury are still stuck on Apocalypse despite trying to escape. And as Darkseid’s forces are in full swing as Apokolips literally swallows Earth 2 for power Kalibak and Barda come to a game changing disagreement with Barda leaving the forces of Darkseid and fading into the background with the rest of the citizens at the Atom’s Haven Command Center.

As Alan Scott finally possesses all of the power of the Avatars, Superman and Power Girl, in the midst of having their powers drained because the sun is blocked out by Apokolips are finally given vital boost of power doubling as a way into Darkseid’s chamber when Green Lantern blows a hole into the side of the planet using his new found power. Hawkgirl and the Flash are doing all they can to get the hopeful citizens of Earth 2 into transport ships that will be able to break lightspeed travel  into another universe which we find out in the other big weekly just so happens to be New Earth.

We get an awesome scene as Superman and Power Girl rampage through the battlefield looking for Darkseid. When she finally finds him it sets up the most intense fight we have seen against Darkseid since the first JL arc after the reboot in 2011.  She even evades his Omega Beams. Something that even most Supermen and at least one Batman hasn’t been able to successfully do.  In the midst of this battle in the background several of the transport ships come crashing down. And one of those ships is carrying Jay Garrick’s mother. He races off to find her.

As Darkseid gets the upper hand against all of our heroes in a last ditch team effort to save the planet it seems that all hope would be lost as Green Lantern ends up being the last man standing. As even he is badly defeated Green Lantern’s boyfriend Sam in Avatar form appears and helps him ascend to his most powerful form being able to use the avatars of all of the 52 Universes in order to transport everyone off the planet and to safety in the transport ships. As they make their journey to New Earth Darkseid sits on his throne and makes a not so subtle reference to the upcoming war between he and the Anti-Monitor in June’s Darkseid War.

No one can really say that we expected Earth 2 to survive in this series especially as in Future’s End a major plot point of that story is the fact that Earth 2 refugees are being held captive as prisoners of war. DC really wrote themselves into a corner and one can only thank their lucky stars this series only had 26 issues. Any more would have been absolutely unbearable. I was hoping we would get a little more though. Maybe even perhaps an explanation on why New Earth would fight people who had no choice but to abandon their universe. I guess we will have to chalk it up to nothing more than paranoia after Forever Evil.  I am also kind of put off by the fact that while this series was largely entertaining, particularly the Batman and Huntress relationship we don’t actually find out what the hell happens to these characters within the series itself. Can DC write anything any more with a little bit of finality? Why are all of these weekly series ending with segways into other series?