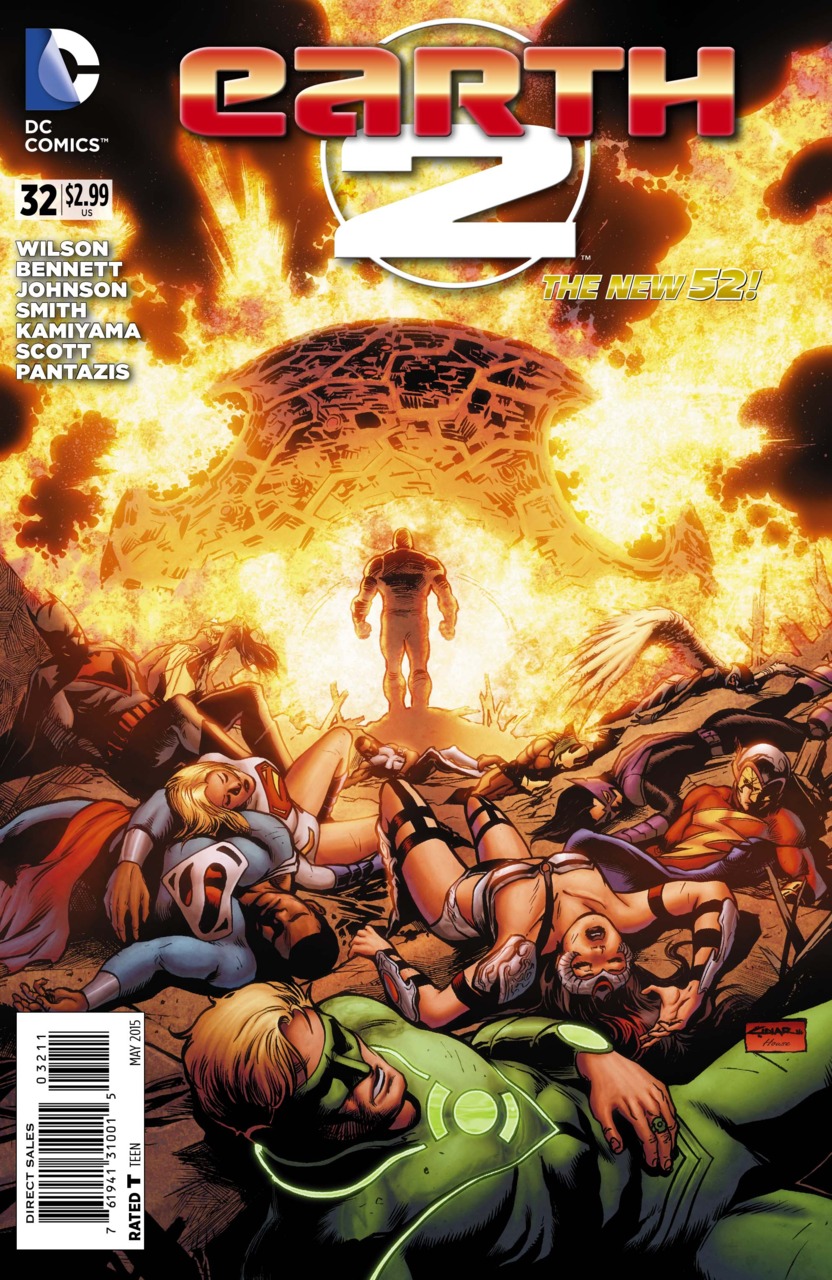 The heroes of Earth 2 (aside from Lantern, Terrific and Miracle) are finally all in the same place as we open up issue #32 Atom’s Haven Command Center and we for the first time see just how Apokolips drains the power from the worlds it devours by breaking apart and literally swallowing the Earth. How all of our heroes all got there is a mystery as even after this weeks issue of “World’s End” it was still pretty clear everyone was split up. The odds are stack That note aside it’s finally good to see everyone getting on the same page. Even though it is rather murky where this takes place between the weekly series it is good to actually see everyone in one room beginning to act more like a team than say a bunch of people with half a plan and the will to succeed, all barking orders at one another.

Batman, Huntress, and Green Arrow in a red suit arrive at the command center and are given the SITREP. Amazonia has fallen. The avatars have failed. Mr. Terrific and Mr. Miracle are still cut off by Apokolips and the Deathspawn is traversing much of the globe turning the land into molten metal. With all of that happening it was damn satisfying to see a scene with everyone standing in one room simultaneously getting reemed by what I can only describe as a Captain America ripoff but also realizing that this is it if they want any form of life after the war against Darkseid. This is their last chance. The last stand of Earth 2. The planet may be doomed but that doesn’t mean it’s people must die with it. And they all remember why they are heroes in the first place.

While one of Darkseid’s drills descends on the command center Power Girl and Superman try to no avail to destroy it with brute force while Hawkgirl and Dr. Fate head to shut down the it’s power core. Like most iterations our Dr. Fate, a man named Khalid, hasn’t settled into the role quite yet and views the role as a curse as it has severely his ability to think clearly especially after being tortured by the evil Superman clone. He believes the only way to bring down the core is to throw the helmet at it which would also solve his problem of being the face of “The Order of Nabu.”

One thing I find strange is it took thirty-two issues of this book to give Hawkgirl and Doctor Fate an origin story although it was rushed.  As archaeologists in Egypt after disturbing a spirit in the Necropolis, Hawkgirl is given the “gift” of her wings. In order to save her, Khalid puts on the helmet and leads them out of the temple. Now this is both interesting and frustrating. Interesting because it has been a story that has yet to be told and frustrating because so much other crap is happening that taking a break in the action to shoehorn an origin for one of the main characters of the book seems counter-intuitive when it doesn’t actually move said plot forward. It feels like the writers decided if they were gonna be able to do it at all now was the time and I personally wish it was given more time to flesh out because of how little we actually know about Hawkgirl or really any of these characters aside from Green Lantern.

There was no Dick Grayson or Ted Grant in this issue which was a bummer since the two have so far in this series made an interesting dynamic and one which I would want to possibly see continue after Convergence even if that possibility is slim to none. We know that there will be a new “Society” but is there enough room on New Earth for two Dick Graysons?

As always the presence of the Thomas Wayne Batman is consistently all this reviewer needs to want to pick up this book and I can’t wait for him to meet his son again in Convergence as we will see if he can truly be redeemed. It’s troubling to me that there is a possibility that the characters that we care about most on Earth 2 might not make it out alive. The tension and drama of those facts is both great and powerful even if one can only wonder though if Thomas, Dick, Mr. Terrific, and others will be one of the many characters to lose their life on the Blood Moon or if some will even before.