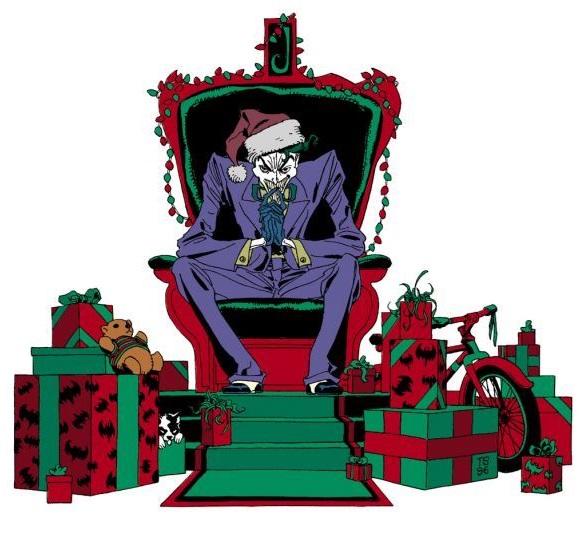 While the holiday season is a time of joy, reflection and festiveness, The Dark Knight has often been used as a beacon of light in the bleakness of despair that can happen during this time of year. Jeph Loeb and Tim Sale’s classic 12 part mini-series, The Long Halloween set itself up to use the major holidays of a month as the basis for the corresponding issue.  The December one was of course, “Christmas”, and it revolves around The Joker being jealous that the new serial killer Holiday is taking his spotlight. During the height of Batman: The Animated Series’ popularity in 1995, the DC produced a one-shot Holiday Special anthology book from the tie-in series The Batman Adventures.  Obviously the artwork comes from the show, and featured classic stories such as Harley Quinn and Poison Ivy using Bruce Wayne as a “sugar daddy” while mall shopping.  Also a classic one from the book is a New Year’s Eve story featuring Batman meeting with Commissioner Gordon at a diner for some midnight coffee and well wishes to surviving another year, and one of these years Jim will finally beat Batman to the check!

Speaking of Paul Dini, during his run in Detective Comics, his “Slayride” from #826 is a modern holiday themed Batman classic.  Featuring The Joker kidnapping the Tim Drake Robin and taking him on a joyride to terrorize holiday shoppers. Probably the most well known Batman Christmas story is the short “Silent Night of The Batman” from Batman vol 1 #219.  Written by Mike Friedrich, with Neal Adams art, is about the citizens of Gotham giving Batman “the night off” as he spends the night with the GCPD singing Christmas Carols.  A couple of years later Dennis O’Neil’s “Silent Night, Deadly Night,” a story where Batman tries to stop a recently fired man from killing his former boss, #239 is also up there on various lists.

Despite holiday episodes being a trope of television programs, and despite a slew of Batman versions on television, both in live action, and animated form, there hasn’t been as many overt episodes featuring Batman as the main star of the vehicle with holiday themes to them, but there are some notable ones.

The most well known instances have come from the Timm/Dini-verse animated shows.  One of the very first episodes of Batman: The Animated Series was “Christmas With The Joker” where Bruce and Dick are about to enjoy the movie Its A Wonderful Life, when the station they are watching is hijacked by The Joker.

Oddly one of the first episodes of the BTAS sequel show, the premiere episode in fact, The New Batman Adventures as well had a holiday theme with “Holiday Knights.”  Which was directly based off of the anthology one-shot Holiday Special of The Batman Adventures.  The only story from the comic that wasn’t used for the episode was the Mr. Freeze one.

It shouldn’t be a surprise, that a show that was a throwback to 1960s storytelling in comics, Batman: The Brave and The Bold, would have a Christmas themed episode, and early in its first season the show obliged with “Invasion of The Secret Santas” where Batman and Red Tornado team up around the holidays to fight threats, including an army of Santa robots.

Finally, going all the way back to the beginnings of Batman on animated television is “Cool, Cruel Christmas Caper” from the 1968-1969 Filmation The Adventures of Batman segments of The Batman/Superman Hour.  In this short episode, Mr. Freeze, disguised as Santa, uses Gotham City’s Christmas parade for a heist.

In Batman theatrical movies, holidays that occur late in a calendar year were prominent in the Burton/Shumacher four films.  For example, the climax of Batman Forever happening on Halloween, but for the December holiday season, Batman Returns which featured Christmas parties, to discussions about the deadliness of mistletoe and kisses, to the final lines of the film being a usual Yuletide wish of goodwill to men, and women was where it was the most prominent.

And finally, while a fan made project, the popular YouTube Channel, Its Just Some Random Guy back in December of 2007 posted a parody version of The Night Before Christmas featuring Batman.

From all of us at The Batman Universe, we wish you happy holidays!