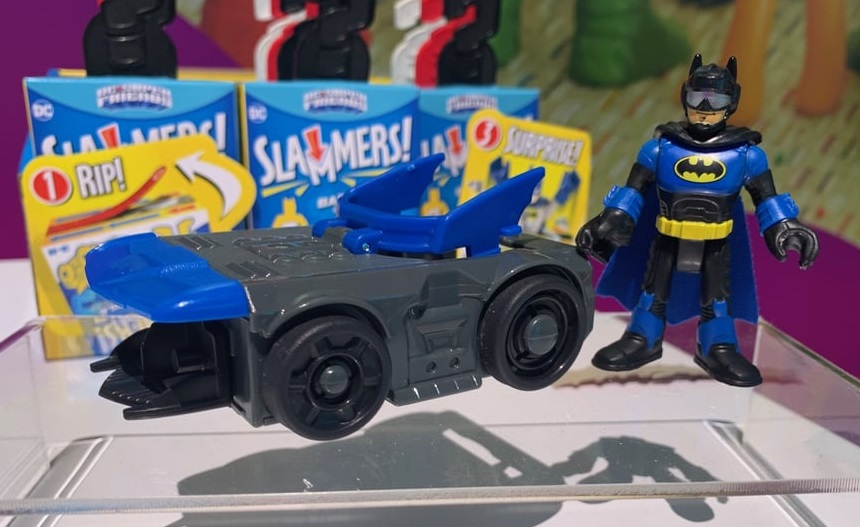 We have seen a lot of the items that McFarlane Toys and Spin Master have with their new DC licenses, but there hasn’t been a lot of talk about Fisher-Price. You may remember that when it was announced that Mattel would not renew the main DC license, the caveat was that they planned on renewing the license for preschool toys and girls’ toys. That brings us to the New York Toy Fair.

Fisher-Price has given a sneak peek at their latest Imaginext line called DC ‘Slammers’. This is a new line that continues the massive success of blind bags offered by almost every company out there with a twist. Check out the video.

The figures will ship in a case that features twelve figures. While it is a blind box, the catch is that depending on the color of the question mark at the top, you will have an idea of the character that could be featured in the box. Black is Batman. White is Mr. Freeze. Red is Joker. There are six variants of Batman and 3 of each Mr. Freeze and Joker. It is also important to note that some of the various variants include Harley Quinn, Batman Beyond, Black Bat and who appears to be Killer Frost or possibly Ice.

There aren’t a whole lot of details available at this moment as far as price, but they are expected to be found in stores nationwide before the end of the year. Props to DCCollectors for sharing the info first.