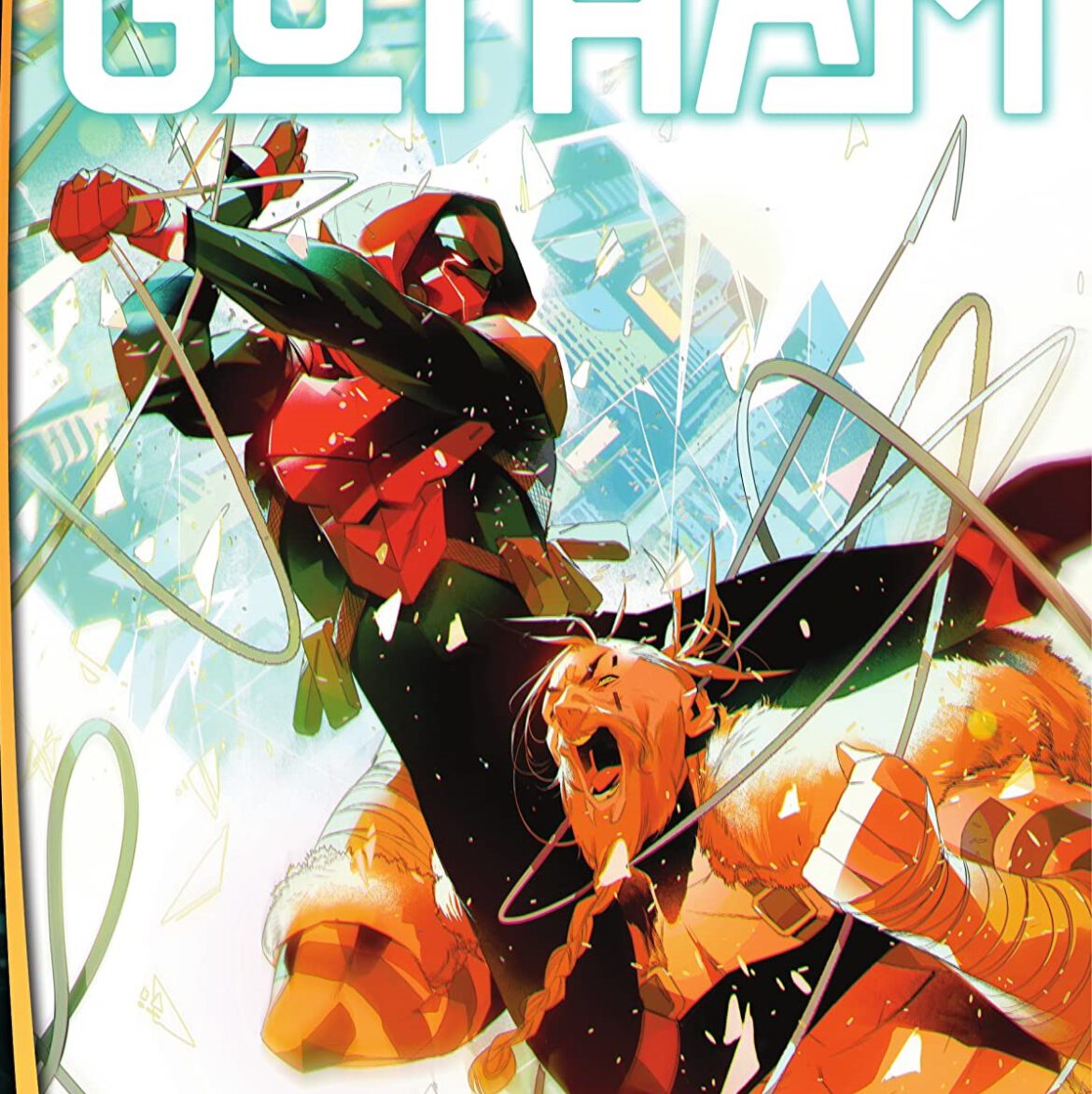 Overview: In Future State: Gotham #7, the first arc comes to a climax as Jason Todd, Jace Fox, and the Bat-Family engage in an all-out fight against Warmonger’s might!

Jason takes brutal injuries in his fight with Warmonger but manages to plant a bomb on the villain and steal his Hatter controller, allowing him to stop the war. Dick and Jace arrive, offering Jason a path back to the family, but Jason says he trusted the wrong person, and he has to make it right before he’s ready to come back. Jason confronts the person he thought was Bruce Wayne, but receives silence from Crime Alley in response. He connects with Jace on the rooftops, and they forge a partnership to bring down the Magistrate together, lighting up the sky with a new Bat-signal. The villain Hush sees the signal and laughs, saying his employer will be pleased with his actions and promises to bring a new Joker to the city.

Analysis: It’s been quite a treat seeing not only so many answers to questions raised by January and February’s Future State event in this black and white ongoing series, but also how it parallels the current Fear State event in the Bat-books by James Tynion and his collaborators. The use of Mad Hatter tech, the ever-present Magistrate, the betrayals, and the theme of family uniting to defeat the threat all form a nice parallel narrative to Scarecrow’s attempted takeover of Gotham in the current continuity. However, though the defeat of Warmonger is reasonably satisfactory, the promise of the future story arc being Hush, a new Joker, and probably at least two unknown mystery forces (the false Bruce Wayne who fooled Jason, and Hush’s employer) – unfortunately none of these threats are really that interesting (and honestly, neither was Warmonger, a brand new character whose origin was backloaded instead of frontloaded, leading to a serious lack of investment). Williamson and Culver could really use some mystery plotting brush-ups since they relied on exposition dumps from the villain himself (a weakness in James Tynion’s writing as well, as seen particularly in Batman Eternal and Batman and Robin Eternal), which leaves our heroes standing around learning stuff instead of doing detective work and driving the story forward based on their own choices.

Another aspect of the Future State: Gotham world one hopes will see more development is the vast array of characters available. We have hints of that with Dick, Tim, Steph, and Duke showing up throughout this arc, but an arc for each of them similar to the focus given to Jace and Jason (though this arc is much more dominated by Jason’s actions, perspective, and choices) would seem a natural choice given how vast the scope of the Future State world is. After finishing up this oversized (generally, a six-issue story is considered “standard” at DC in terms of how they collect their trades and how they’ve been structuring events in the past decade) storyline of the Warmonger and the Bat-crater, will Dennis Culver, taking over full writing duties as Josh Williamson takes over the main Batman book in the present day, do one-shots similar to his Harley and Punchline issue earlier this run, or will he continue along the path of Williamson with more epic arcs? We’ll have to wait and see, but hopefully, he’ll focus on the wider cast in a rotating fashion, similar to how James Tynion developed his team in Detective Comics.

Future State: Gotham #7 also contains character and cover sketches, as well as a backup from Batman: Black and White by Josh Williamson and Riley Rossmo featuring Batman, Robin, Nightwing, and Batgirl vs. Man-Bat.

Simone di Meo’s main cover is a gorgeous action shot of Red Hood with a two-leg chokehold on Warmonger, with lots of spinning cables providing visual excitement, though it feels framed slightly oddly, making the composition feel unbalanced or incomplete, similar to the connecting Harley Quinn/Punchline covers of #4, without any connection to make the composition feel more complete. Rose Besch continues to provide gorgeous anime-style character-focused cardstock variants, this time featuring what appears to be Batman with a bright yellow spray-painted Bat on his chest, slipping into the shadows. Both are excellent covers, though the Besch covers have appealed to me a bit more personally in the run.

Though many elements of Future State: Gotham are fun in themselves, as a continuation of the two-month event this year and as a parallel to Fear State, on the whole, the title still doesn’t quite make the strongest case for its existence with this conclusion.