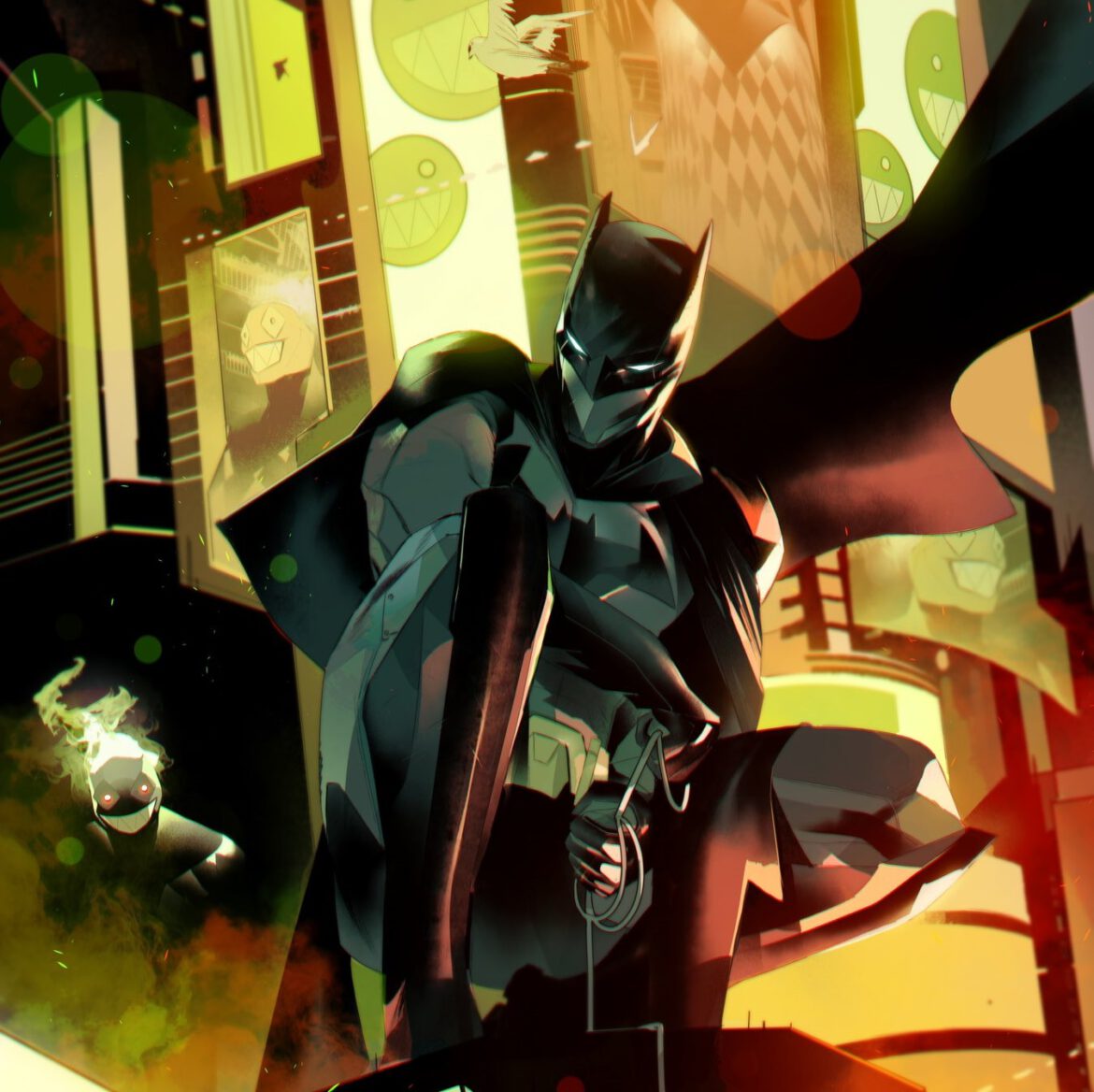 Overview: In Future State: Gotham #11, Talia and Dick Grayson face dark secrets, as Jason Todd, the Next Batman, Harley Quinn, Punchline, and many more face the Next Joker!

Synopsis (spoilers ahead): As Punchline is transported back to jail, the Next Joker takes control of Magistrate robots to fight the Next Batman, Red Hood, Hunter Panic, and Tobias Whale. Harley Quinn comes to the rescue, disparaging both Jason and Jace, but Red Hood convinces her to help Hunter Panic with Whale.

Talia hooks Dick Grayson up to a huge drug apparatus so they can use the psychic powers created by the drug to find Damian, and when he doses, Dick sees Jason, Jace, Peacekeeper 01, Joker, Bruce, the Next Joker, Harley, Duke, Tim, Steph, Hush, Punchline, and Damian in a kaleidoscope of color. He tells Talia that he knows where Damian and Bruce are, but collapses, and she threatens her medics with death if they can’t keep him alive.

Jason takes Jace to one of Bruce’s old satellite caves to get some tech, while Harley, Hunter Panic, and Whale run into The Next Joker and his robots again. They fight a losing battle until Jason and Jace arrive clad in transforming motorcycle mecha-suits.

Analysis: Dennis Culver is joined by new artist Geoffo in Future State: Gotham #11, whose work is a good match for the main artist Giannis Milogiannis. The biggest highlight of the issue artistically is the use of color for one page during Dick Grayson’s drug trip, where the hues were provided by the masterful by Jordie Bellaire. As the newcomer to the black and white, sketchy vistas of Future State: Gotham, Geoffo does a fine job – a more solid grasp on series lead artist Giannis Milonogiannis’ style than other fill-in work for this run.

That being said, Culver continues to hammer on the action without serious character exploration, relationship, or development as Jason and Jace continue to dominate the series, despite the opportunities provided by the rest of the Bat-Family. The tiny scenes of Dick Grayson and Talia hunting for Damian and Bruce give more life than the other fifteen to eighteen pages of slogging “he just keeps getting back up, so hit him with a bigger stick” Next Joker action. I’m sure the final scene where Jason and Jace show up in Transformers-style mech suit/motorcycles, but without any attachment to what Jason or Jace actually want, who they are as characters outside their positions, and their names, it’s become increasingly tedious. The series has real potential, but the insistence on action over anything else, and action that’s increasingly repetitive because of the extremely narrow focus despite the huge cast and location open to them, drags the series down to a slog.

Included as well is “A Place In Between” by Rafael Albuquerque as the reprinted backup.

Simone di Meo continues to provide vivid, neo-noir-punk style covers, this time with the original Jace Next Batman costume front and center, with a hint of Next Joker behind him. A very Dark Knight Returns style Hunter Panic, complete with ropy lightning in a bright blue sky, splashes onto the cardstock variant by Mike Bowden.

While Culver is clearly having a lot of fun, and new artist Geoffo does a solid job of picking up the title’s style and world, the emphasis on unmotivated action over a use of the rich depth of characters available in this setting continues to disappoint.