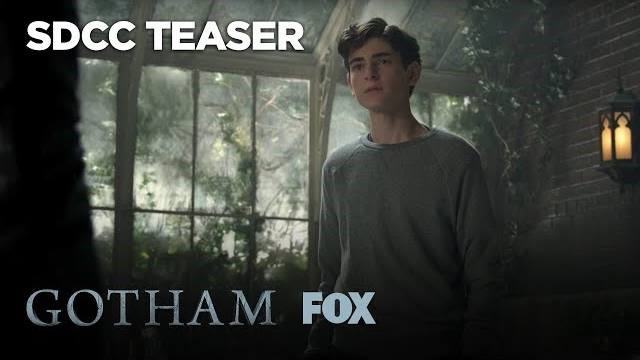 Gotham fans got the first look at season four this at SDCC, including appearances by full blown villains and the first live action incarnation of a rather obscure character from Batman’s early days.

First up is the trailer for season four, which has Bruce and Selina really upping their action game. Also seen is the first incarnation of the Iceberg Lounge and the full reveal of the Scarecrow, complete with his mask and fear gas. Looks like at least the first half of the season is going to revolve around the good doctor. We’ve also heard reports that Ra’s al Ghul and Solomon Grundy showing up. Bruce better up his training fast if Gotham City is going to survive until Batman shows up.

While Harley Quinn is taking over the silver screen and the comic book world, she will not be making an appearance on Gotham, contrary to an earlier hint by star David Mazouz. Producer John Stephens had this to say in response to a fan question regarding her future appearance:

Fans of Batman: The Long Halloween and Dark Victory will soon see another familiar face on Gotham as Crystal Reed (Teen Wolf) has been cast as Sofia Falcone. While her comic book incarnation is the daughter of Carmine Falcone and sister of Alberto Falcone, the Gotham version is reported by Deadline as “the strong, intelligent and calculating daughter of Don Falcone. Having run the family’s business in the south over the last 10 years, she returns to Gotham to help Gordon take down Penguin.” I wonder if her character arc will progress along the lines of her comic incarnation, meaning an appearance from The Hangman.