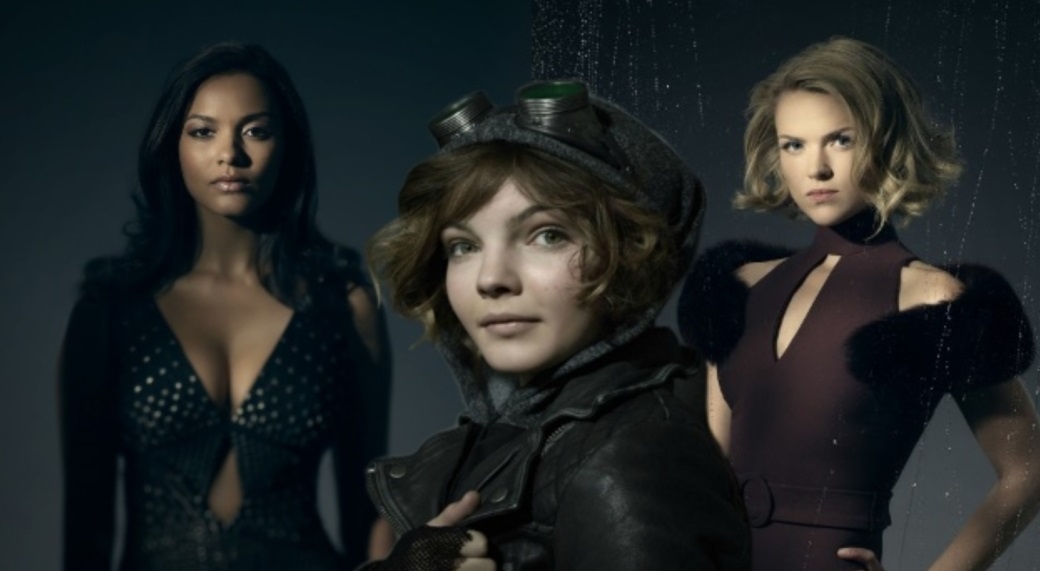 On January 13, the Gotham Sirens participated in the “Wonder Women” panel at the “DC in DC 2018” event in Washington DC. Camren Bicondova (Selina Kyle), Jessica Lucas (Tabitha Galavan) and Erin Richards (Barbara Kean) sat down with a group of reporters to talk about the event, feminism and some hints at what’s to come for their characters on “Gotham.” Ben and I where there to get the scoop.

The three women sat down and were immediately in good spirits. I asked Erin Richards when we would learn what Ra’s did to Barbara Kean’s hand in the prison.

I followed up by asking where the Sirens would be based since their last place blew up. The way they answered the question showed how relaxed and in sync with each other the trio was. Jessica turned to Erin and asked, “We’re in the club aren’t we”. Erin playfully replied, “We’re in the club, back in the club”. Camren then chimed in saying “We in the club,” with her best DJ impression.

They then revealed that the Sirens would be having solo adventures for a bit. “We’re kind of branching off and doing our own thing for a little bit and exploring other things and I think there are plans to bring us back together,” Jessica said. “We find a way. We’re star crossed lovers,” Camren said with a smile. “We’re not breaking up,” Jessica assured me. “Exploring other avenues for a little while,” Erin said. “We’re our own individuals outside of the entity,” Camren said.

Ben noted that Camren did her own stunts and asked her how involved she was. Camren revealed that she’s recently taken a bigger role in the show’s choreography.  “At the beginning of this season I talked to the producers and stunt coordinator and said I wanted to be more involved in the stunt process. I actually have rehearsals now and sometimes they’ll last three hours because I want to keep doing it. I actually get to collaborate so some of the choreography is actually my input which is really fun because I came from dance and I like to choreograph. To see something on TV and say ‘oh my god that was my idea’ is really cool,” Camren said.

Another reporter asked the girls how it felt being about “DC in DC 2018” and noted how the subject matter was deeper than typical Comic-Con.

“So empowering that we get to discuss these issues in an open forum like that. I feel like the audience is really warm and receptive to it,” Jessica said. Erin followed with some thoughts about how things are now different for females in the industry. “There use to be a real feeling of you would just kind of toe the line a little bit. You would smile and say what you needed to say and now it just feels like it’s completely open and it’s almost welcome. Our feelings. Our thoughts. Our reflections on how we should be treated, what we should be wearing, how much we should be paid. Every single aspect of our lives is open for us to be like ‘No, this isn’t acceptable anymore’ and not to not then lose our jobs instantly.”

Camren followed, “It feels nice to be in a space that is welcoming because a lot of the time I feel like the topics that we’re discussing have always been shut down. Like feelings. Like depression and anxiety. I’ve never been in a space where that’s actually been interested in. It’s nice to have space where you can just talk and not be judged.”

It was great to see the three actresses in sync and at ease with each other. Their real life partnership seems just as close as their fictitious one. Gotham returns this spring on Fox.