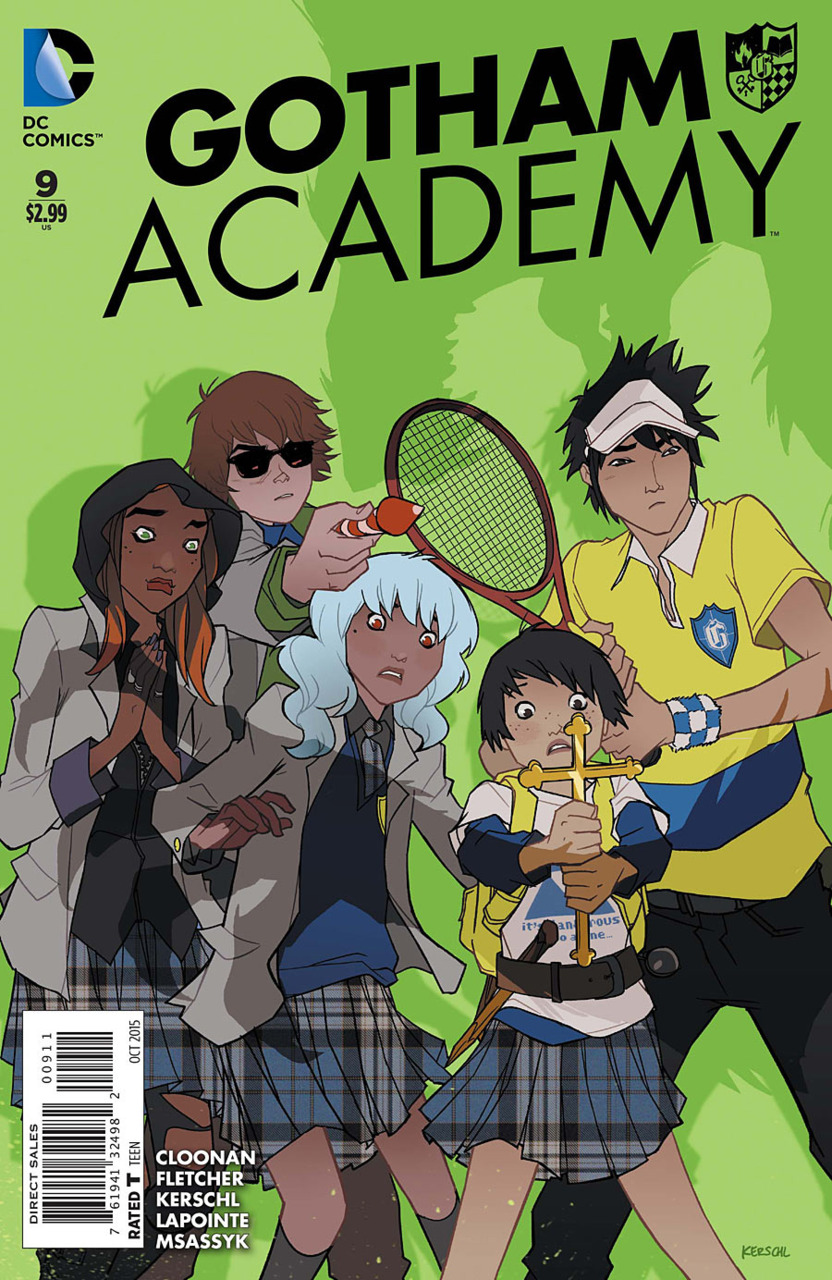 The mystery of Olive’s family deepens and a new danger lurks on the scene threatening the life of the members of the Detective Club in Gotham Academy #9.

Something is creeping through the woods late at night and sees Olive, alone, reading a note. It approaches Olive. Nearer and nearer.

She startles Olive who is reading the note from her Mother she found at the end of issue #8. The rest of the Detective Club catch up to Maps and ask Olive what she is reading. Olive refuses to say so the crew decide to go to the cemetery that Tristan was attacked in (also in #8) and look for clues.

Pomeline finds a scrap of fur which Colton determines is from an animal. Colton leads the team to an old trailer out in the middle of the woods that he uses for his mysterious activities. He discovers that the fur is from a wolf and Pomeline decides they are confronted by a werewolf. Silver necklaces and crosses are passed around to defend them from the beast when Maps realizes that Olive has snuck off.

Olive has made her way back to her dorm room where she finds the very creepy Katherine, Maps’ roommate, pulling down her posters. The interloper scurries away. Suddenly, an envelope slides under her door. It is marked Classified and addressed to Olive. Inside the envelope are Olive’s admissions file. She reads it and discovers that her mother was a costumed villain.

Maps bounds through the door with a silver necklace for the still shocked Olive. The two discuss Katherine’s odd behavior and Olive decides she needs to ask Professor Strange about the contents of the file.

Professor Strange doesn’t know much about what is going on but they discover that Olive is being ‘watched over’. Strange says that there is another student being monitored as well.

Olive and Maps head over to the examination room where Tristan is being tended to. The group leaves Olive and Tristan alone. Olive tells Tristan that the two of them are being monitored when a great werewolf in running shorts crashes through the window.

Olive whacks the beast on the head with a stool and Tristan uses his wings to fly himself and the wolf out the window. The Detective Club finds Tristan on the ground with no wolf in sight. They realize that the animal was wearing Coach Humphrey’s clothes. Suddenly they hear the baying of the beast and decide they must trap the werewolf.

A complicated plan they call “Part Flot” (Wolf Trap spelled backwards) is devised which apparently uses Olive as bait. The wolf attacks and as it approaches Olive she hears the voice of someone that claims to be her mother. The voice tells her to use her fire to burn the wolf, burn the school and burn Gotham for what they did to her.

Olive doesn’t get the chance to ignite anything because Colton hits the wolf with a dart containing the wolf antidote. Apparently, Colton had concocted the antidote with Dr. Langstrom. The wolf reverts back into Coach Humphreys. Milo had been helping Humphreys with his animal infestation but in his absence Humphreys was left to fend for himself.

After all the commotion was over Pomeline confronts Olive with the information that she had stolen and read the note her Mother left her. They go to the theater so Poms can let her know about what she found out about the super villain name her Mother went by: Calamity. Apparently Pomaline has lead them to the theater where Calamity is. When Olive realizes this she says they have to run. As the two race away fire begins to engulf the theater.

The first thing to say about Gotham Academy is how beautiful of a comic book it is. The colors and simple yet rich drawings are effective at conveying mood a creepy mood that evokes the Harry Potter movies without being derivative.

This effective art style makes the characters spring to life. Maps is full of youthful energy and enthusiasm, Olive is haunted by her past and the faculty and staff all are very specific and effectively portrayed.

But the thing that I really like about Gotham Academy is that it is a mystery story reminiscent of an old fashioned whodunit. I want the story of Olive’s Mother uncovered as much as she does.

The one negative thing that I will say about this issue is that the wolf story is a little weak. There really isn’t any ‘who is the werewolf’ mystery and when it turns out it is Coach Humphreys I realized that I didn’t care one way or another. I know that it is just the ‘monster of the month’ and the real mystery is about Olive’s mom, but I think it could have been done as more of a puzzle.

Because I love this book so much I am going to be a little more critical of it than I normally would be. Even with the relatively low score  I’m giving this issue it is one of the best books on the newstands.