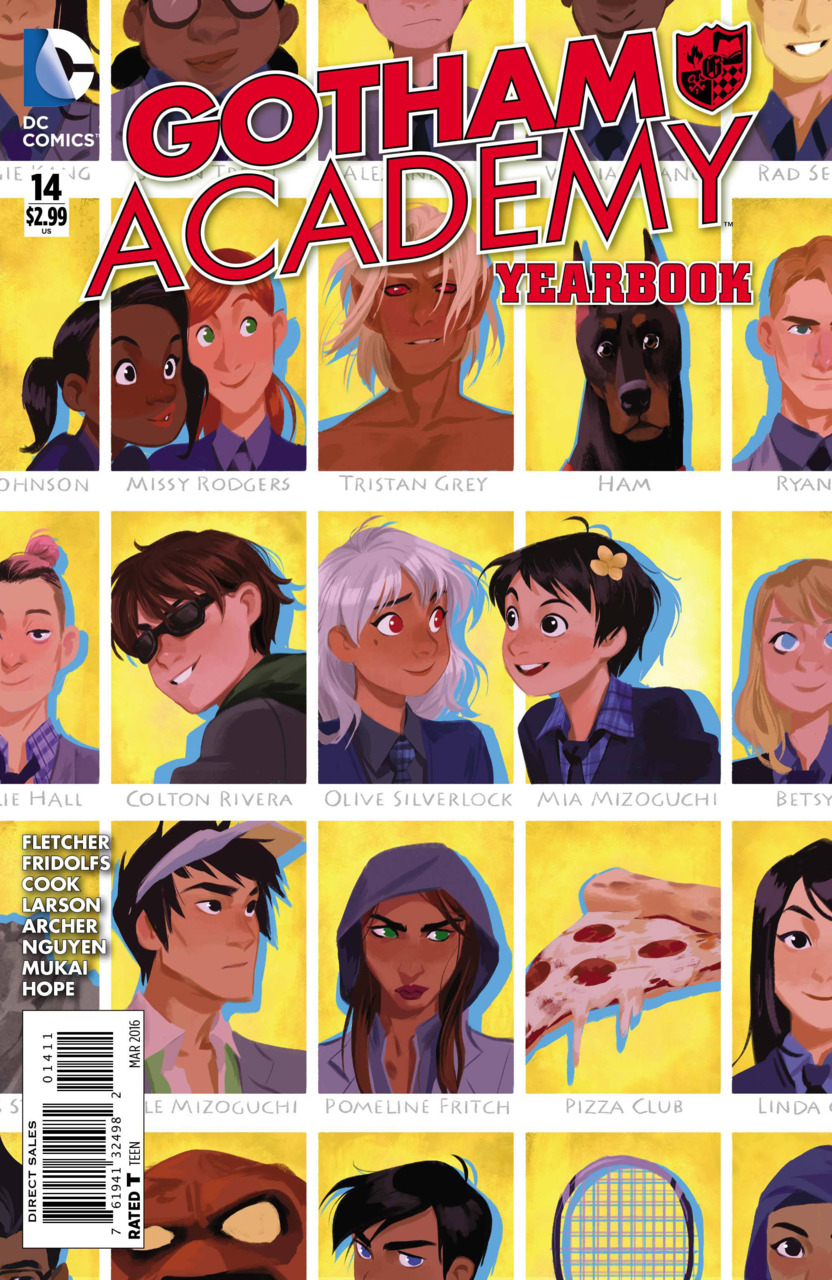 In Issue 14, we begin the new story arc entitled “Yearbook.” During this arc, we will view multiple mini-stories within every issue, each uniquely crafted by their own individual writers and artists. These individual stories are brought together by a constant storyline written by Brenden Fletcher and drawn by Adam Archer.

Synopsis:
In their dorm room, Olive discovers that Maps is down about something. After inquiring why, Maps shares that the yearbook club turned her down because she was already too involved. Olive tries to cheer Maps up by giving her a blank scrapbook, suggesting she can create her own yearbook. The two reminisce over various stories that they recommend to be placed in their yearbook.

First, we view Derek Fridolfs’ “Animal Science 101,” describing a time at Gotham Acedemy during Prank Week. Eric and Colton get busted for breaking into Dr. Kirk Langstrom’s (yes, the Man-Bat) class, attempting to steal an animal from Professor Brown whom Langstrom shares his lab with. The two accidentally unleash a ferocious bat-like goat that eventually flies off after chasing them and Dr. Langstrom out of the building. The story results with Eric and Colton having to dress as goats and hold “baaaad students” signs as punishment for all the school to see.

Back in their dorm room, Olive and Maps are joined by Pomeline as they move onto their next featured story that’s going in their yearbook.

Katie Cook’s “Queen Glee” features highlights a time when the Glee Club at Gotham Academy attempts to musically hypnotize people from their school, forcing them to do whatever the head of the Glee Club commands. Ultimately, the Glee Club wants everyone in school to like them more than the other vocal group on campus, the a cappella group, “Not Your Forte.” While investigating the club, Maps and Olive discover what they’re really doing and divulge a means to stop them. After Olive is hypnotized, Maps saves her by unplugging the music which stabilizes everyone the club was trying to keep hypnotized.

For the last story, the girls visit Professor MacPherson to hear one of her stories from when she attended Gotham Academy while she studies abroad from Scotland.

While there, they describe an instance where Isla MacPherson was bullied in Hope Larson’s “Scottie Dog.” While Isla is hanging with two other popular girls, they plot a way to get a cute boy’s phone number from him while he’s working at the mall. The two of them leave out Isla because of her “cute widdle accent.” Isla stumbles off crying but is comforted by a gal who we learn eventually becomes La Pisada, a notorious assassin who has the power to blend into people’s blind spots. The issue ends with Professor MacPherson in present day looking a framed photo of her wonderful time with La Pisada as well as a tablet that has an article indicating La Pisada’s criminal record and escape.

Art:
With four different art teams, this issue has a lot to visually digest and evaluate. Adam Archer’s pencils and colors on the main storyline will do, although I still prefer Karl Kerschl’s work. Dustin Nguyen’s art on “Animal Science 101” is wonderfully choppy, reminiscent of sketch boards and napkin doodles. Personally, I’d love to see more books maintaining the palette’s standard. Katie Cook’s art on “Queen Glee” is ridiculously cartoony. It reminds me of some of the work on recent segments of Bob’s Burgers comics. I found her craft to be the least pleasing. Lastly, Kris Mukai’s “Scottie Dog” work at times appears as if it could fit in Frank Miller’s Dark Knight II. Again, it resembles a cartoon but in a far more appealing manner than Cook’s art.

Final thoughts:
For the beginning of a story arc, issue 14 was quite underwhelming. For starters, the actual narrative didn’t seem to bear much weight. Instead, it felt more like a Bob’s Burgers comic rather than a Gotham Academy. Don’t get me wrong; I very much enjoy the Bob’s Burgers comics probably because I absolutely adore the show. However, I wasn’t expecting that fun and animated style to invade Gotham Academy. I hope these next few issues take us somewhere.  The La Pisada ending is hardly a cliffhanger although that’s probably where they’re going. As of now, it seems like we’re almost on a hiatus with this book and, in the mean time, are releasing silly short stories, briefly satisfying our cravings with a bag of Cheetos rather than a burrito. Initially, we feel content until but a few hours later when we realize we’re not only still hungry but also feel disgusted, having wasted our time and calories.