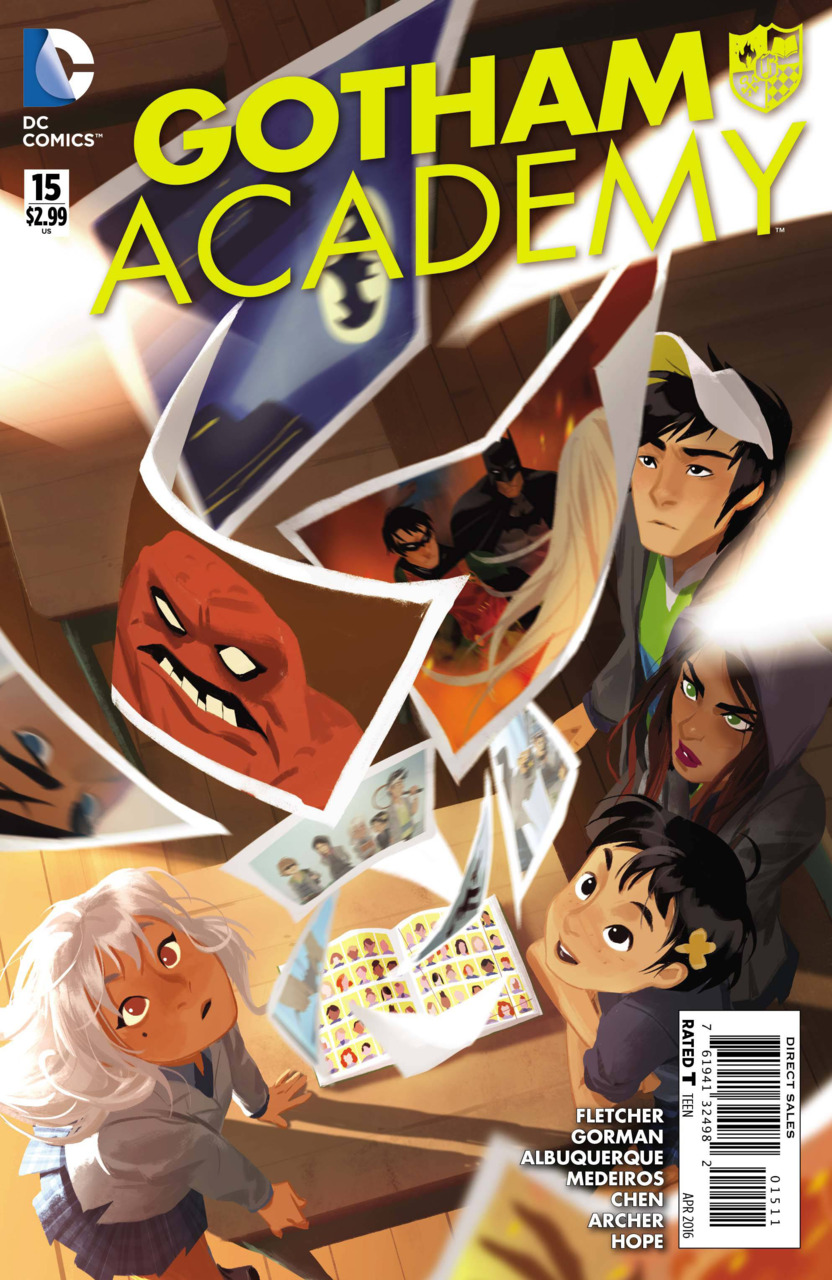 Synopsis: The latest issue marks part two of the Yearbook story arc. Olive is helping Maps create her own yearbook because she wasn’t allowed to be in the Yearbook Club. In this book, we see another collection of varying short stories written and illustrated by various artists.

Maps wants some stories about the teachers for their section in her yearbook. She runs down the list, asking Olive is she has any usable stories.

Mid-discussion, Colton pops up behind the girls, freaking them out initially. After quickly brushing over how he snuck into the girls’ dorms unnoticed, he suggests using the “eggs-ceptional” staff party in the yearbook.

Written and illustrated by Zac Gorman, “Staff Party” covers a four-page story that ultimately ends as a dud. Dr. Kirk Langstrom, AKA Man-bat, is scanning the food table at the staff party but is upset to find only egg-related options. Pissed off, he shares his with Scarlet, AKA Bookworm, that he knows who must’ve been in charge of the food: Edgar Heed, AKA Egghead.

Against his will, Kirk gets dragged off by a gal teacher to go dance to her favorite song. Bookworm is left alone to read which doesn’t bother him; he does enjoy reading. Egghead mocks him with yet another egg-related pun before wandering off with a lady.

In a crack of the wall, Maps is eagerly peeking through awaiting something interesting to happen. On his phone to the side, Colton acknowledges that no one ever thought anything interesting would happen at the staff party.

Back in there room, Pomeline walks in hypothesizing that some of their professors could see into their dreams. Before Olive could deny it, Maps recalls a story Olive had shared with her before regarding a similar matter.

In “Serpents & Secrets,” Olive and Maps play Serpents and Spells, what appears to be the Batman Universe’s version of Dungeons and Dragons. As they’re nearly falling asleep on after playing so long, the two are woken up by a black crow pecking on their window. Maps lets the bird in which somehow takes Olive and Maps into a live-action version of their board game although, to them, it feels like a dream. The crow states that Olive’s “blood of fire” makes her suitable to defeat the beast they’ll encounter.

The crow leads them through a stone-walled maze-like trail, searching for a mysterious book that holds secrets that imprisoned the bird in that body. After quickly taking on giant spiders, the girls encounter The Lich, a hooded skelton-like figure that looks like Death.

As The Lich and the crow attack Olive as she’s cornered against a wall, they wake up in a room full of books. Olive is holding the alleged book that the crow was looking for, come to find out the crow was actually the Scarecrow. When Crane jumps at them to retrieve the book he was searching for, the Headmaster appears out of nowhere to defend the girls. He takes the book and sends the girls off to bed. The scene concludes with the Headmaster asking Scarecrow why he wanted his wife’s locket which was hidden inside the book the girls found.

The issue wraps up with the gang enlisting a dog, Ham, to search for more stories. We follow Ham as he journeys through the school yard and rests in a hole under a building.  Tristan Grey appears, giving Ham a hammerhead-like bone so he’ll stop chasing the real one.

Art: I enjoyed this art far more than part one’s contributors. Specifically, I enjoyed Zac Gorman’s unique style but wish we would’ve gotten more than four pages of it. The new art team in the main storyline is growing on me. In “Serpents & Secrets,” they split the story into two very different art styles; the first was outside of my taste, appearing more cartoony than I’d prefer.

Final Thoughts: I still can’t tell if I like this arc or not. There are many fun Easter eggs and glimpses that seem like they could go somewhere or they could simply be messing with us. It’s funny to me that Manbat, Egghead, and the Bookworm are all on staff at Gotham Academy. Aside from those Easter eggs, we saw fun items like what appears to be the water bowl of Ace the Bat-Hound, chattering teeth from the Joker and a Dagget Industries’ container of Renuyu.

Aside from the deep Batman references, I wonder where this is all going. Are these all random short stories or are they all building to something bigger?