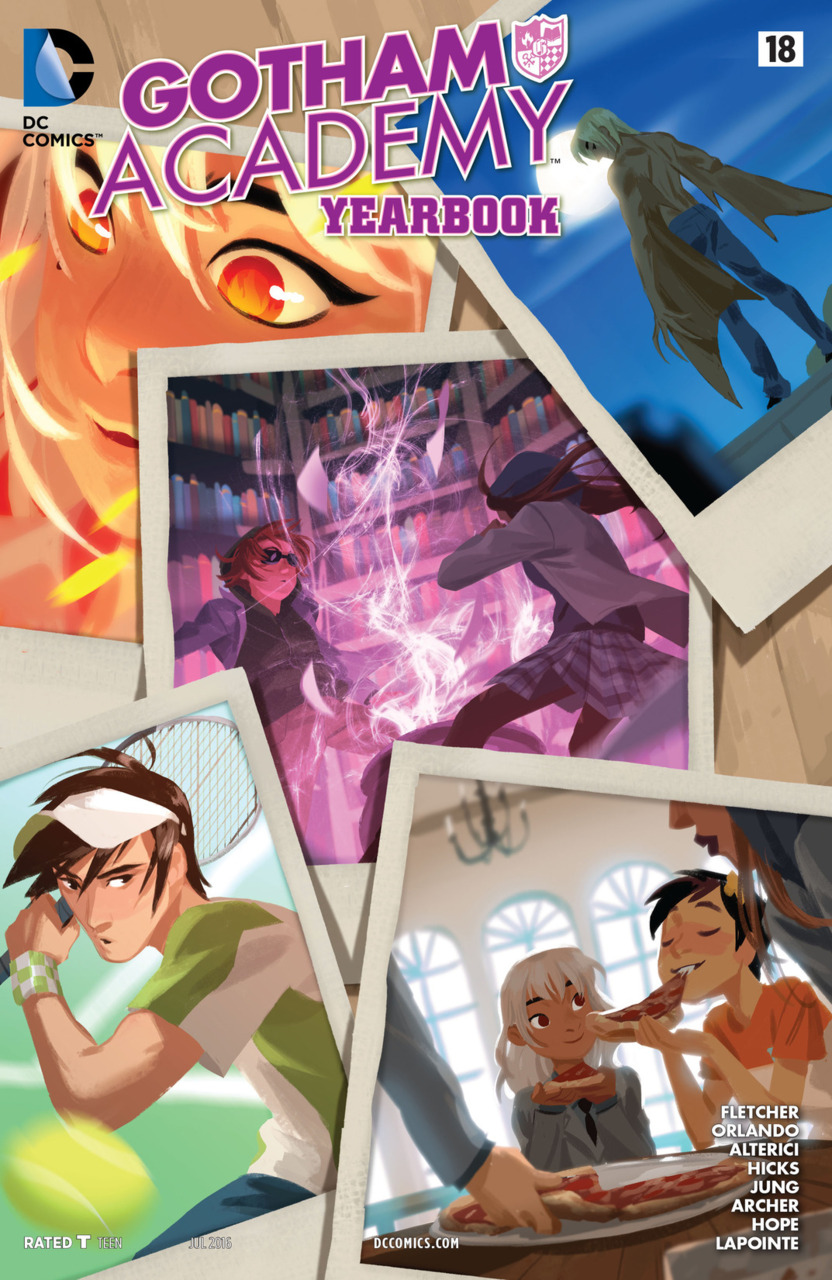 In Brief: The first semester of Gotham Academy closes with Maps and Olive chasing down their yearbook, stolen by Robin!

Summary (Spoilers): The issue picks up right where #17 left off – with Robin (Damian Wayne) dropping down from the ceiling where he was hiding and running into a closet. When Maps and Olive open the door, they find nothing, prompting Maps to remember the previous user of the space, Professor Milo.

“Whatever Happened to Professor Milo?”

Skipping through the months before the start of our current school year, Professor Milo watches Tristan arrive at the Academy with Batman, experiments on the unfortunate young man, infects the coach with the Man-Bat condition, steals a key from Headmaster Hammer, and is fired. He leaves, cackling with his prize, off to Arkham.

Meanwhile, Maps has found a path through the air ducts, leading them to Shop Class, which reminds her of her encounter with Mr. Silversmith.

As a shop teacher, Silversmith seems a tad too obsessed with the metal in his name. He orders his students to bring their most prized possession to plate with silver, promising to fail anyone who brought something less emotionally important to them. Maps, however, has other plans. Using a silvery bauble, she slips into the Shop Class room and steals all of the teachers silver to make her own Monster Fighting dagger out of the shiny substance.

Robin’s silvery footsteps lead to the theater, prompting Maps to remember her own appearance at the talent show.

Pomeline has reluctantly allowed Maps to help her with her “magic” trick – purportedly to create a portal which catches Maps as she falls from a high ladder. However, Maps insists on overlarge white gloves, so the audience can see her hands, but the poor fit causes her to fall prematurely. Pomeline catches her, but the trick is ruined. Pomeline’s mother, however, is proud that her daughter demonstrated heroism and teamwork with Maps.

Maps and Olive see Robin climbing to the roof in the theater. They follow, but the Boy Wonder jumps off with a glider. Maps tells Olive she can drive them in pursuit with the groundskeeper’s cart.

Kyle has promised to teach Maps to drive, using the golf cart, which he’s marked as the Bat Cart with a Batman decal. Maps is excited, but Kyle has chosen his vehicle well, as she cannot drive recklessly with a maximum speed as slow as the cart’s.

Olive and Maps lose Robin, but they find the yearbook, which Robin has left a map to a present for his friends – a first edition of the Serpents and Spells Handbook.

In Depth: And so ends the first “semester” (though it seems like the weather indicates that it’s actually the first year) of Gotham Academy. Adam Archer’s interstitial pages with Olive and Maps are a solid match for Karl Kershel’s style. The four guest artists for the issue also provide some fun stylistic contrasts: Moritat (previously collaborated with Fletcher on Batgirl #47) provides cartoony cute but creepy visuals for the story of disgraced teacher Professor Milo, Minkyu Jung (from Batgirl #51) gives a clean, appealing gleam to the shiny-obsessed storylet of Shop Class, Natasha Alterici gives a beautiful pastel and sketchy flavor to the tale of spiky Pomeline and enthusiastic Maps, and Faith Erin Hicks provides gentle sibling humor and energy to Kyle’s driving lesson.

The art is clearly the most important part of this Yearbook arc, as Fletcher has brought in some of his favorite collaborators from his work on Batgirl and Black Canary over the past five issues, as well as fan-favorite web and independent comics artists to write and draw some delightful tiny stories fleshing out the lives of the five main characters of our favorite spooky prep school. In this final issue, Natasha Alterici’s distinctive touch and Faith Erin Hicks’s energy stand out most – as well as having probably the strongest relational moments between Maps, Pomeline, and Kyle.

This arc as a whole has been much weaker on the writing front. The interstitials, while fun, are too inconsequential and inconsistent to provide any real narrative drive – character motivations drop from issue to issue (two issues ago, Damian was furious that Batman showed Maps special attention, but in this issue, he’s merely trying to give her a present, even though it’s all happening on the same day). When the storylets focus on the relationships between characters, like issue #14’s “Queen Glee,” #16’s “Map’s Day Out,” #17’s “This One’s For You,” and this issue’s “Talent Show” and “Driver’s Ed,” the result is charming, if slight. When the focus is characters we don’t care about, like most of the evil teachers, or the bizzarely stereotypical (and completely unsubstantiated) “Dungeons and Dragons summons ACTUAL DEMONS” storyline, the effect is disjointed and halting.

The array of talent summoned for this five-issue conclusion to Gotham Academy’s first run is staggering – James Tynion, Dustin Nguyen, Steve Orlando, Annie Wu, and Rafael Albuquerque all lend their hands to memorable pages – but the overall result is too atomized to really settle into something more than a warm sprinkling of fun.

Pick up/Pass? More than any other arc of this semester, the Year Book arc doesn’t feel that weighty or strong as individual issues. Each anthology issue is enjoyable enough on its own, but the overall feeling of “snapshots in the life of these characters we love already” nudges us towards a “wait for the trade” recommendation.

In Conclusion: Gotham Academy shuts the cover of the Yearbook with a warm but slightly underbaked conclusion.