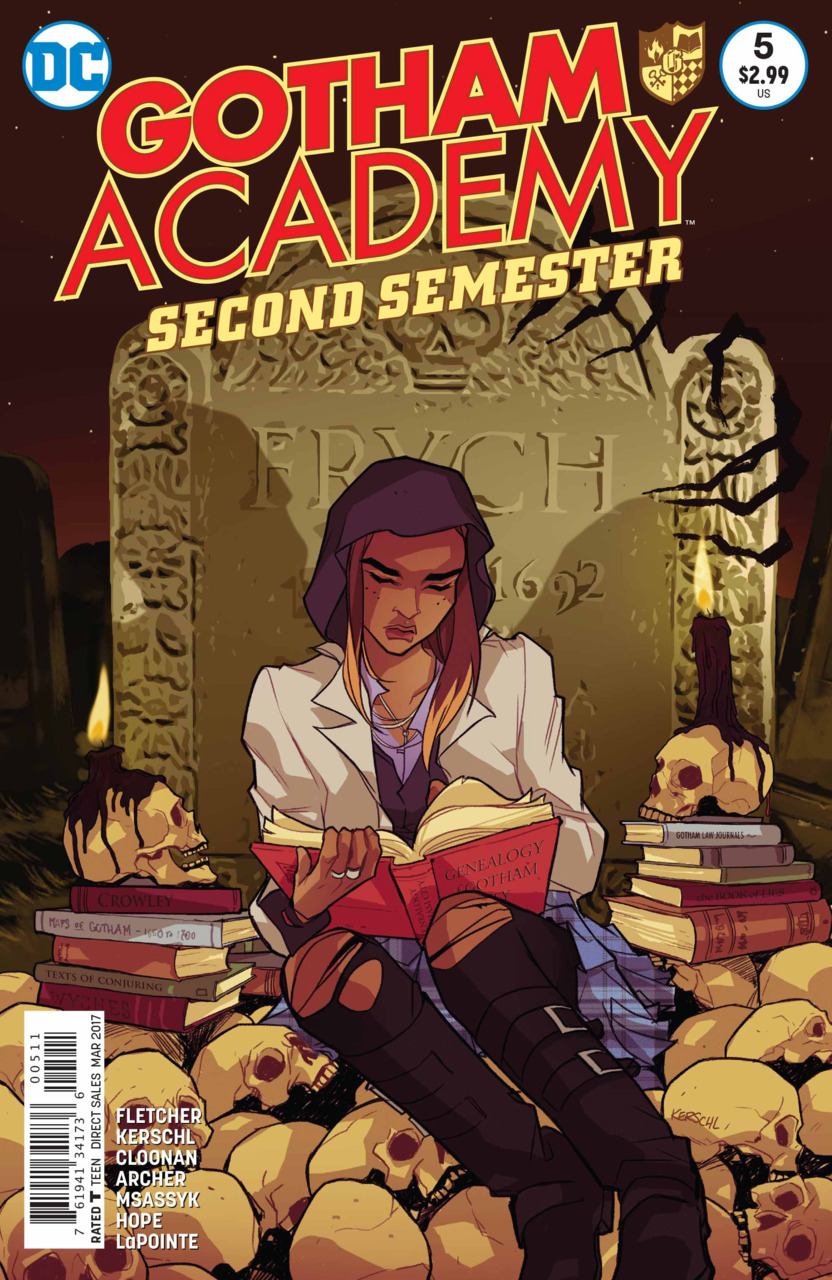 The Detective Club tries to keep one of their own from being expelled from Gotham Academy. But what is the secret of Headmaster Hammer’s mysterious map and the danger that seems to be gathering around the school in Gotham Academy: Second Semester #5.

We take a step back in time to issue #3. Colton and Pomeline have broken into Shop Class so they can find some tools to reverse engineer the Witches Hats that are controlling the students. A teacher enters and interrupts them. Colton uses a Bat smoke bomb he purloined last semester to evade the teacher. The pair find a wainscoating board with the Arkham symbol which they press so they can access the schools hidden tunnels.

In the tunnels they find Mr. Scarlet making notes on a map he has hung on the wall. An alarm bell calls him away. Colton pulls the map from the wall, rolls it up, and runs away. Sadly, he runs straight into Headmaster Hammer who sees that Colton is carrying ‘my map’. They go to the Headmaster’s office where Colton is told that he is expelled from Gotham Academy.

Colton is given an hour to get off the premises, but runs into the Detective Club kids fresh off their victory over Haxan/Pio the Witch in issue #3. Professor Pio tells Colton, who is being escorted off campus by security, to get away from the school while he still can.

Kyle uses his position as the Prefect of the Boy’s Dorm to escort Colton to his dorm room and then, theoretically, off campus. In the interim, Pomeline Fritch gets her Mother involved and Colton’s expulsion is delayed until a hearing is held in the morning.

Meanwhile, Eric is upset about having his books stolen. He brandishes a long cloth full of weird symbols and says that they are ‘all gonna pay’.

The next morning at Colton’s hearing Pomeline’s Mother is defending the boy. Bruce Wayne enters the hearing, greets Olive, and takes a seat among the other judges. Olive’s roommate Amy makes some snide remarks about Bruce.

Pomeline’s Mother is questioning Mr. Scarlet and points out that the reason Professor Pio went bad was because she blamed him for convincing her to pull classified student files. It is also charged that Scarlet is the one that stole Headmaster Hammer’s map, a 250 year old map of Gotham Academy. Mrs. Fritch has a photo of the map she presents as evidence. Colton points out that the photo is missing the pencil marks that Scarlet made. Bruce Wayne tries to looks at the original map, but it has disappeared from its case.

Meanwhile in Wedgewood House, Pomeline, who has stolen the map, has drafted Tristan to use the map to find the Book of Old Gotham. She believes it will answer the mysteries of Gotham Academy.

During a break from the hearing, Colton slips away and disappears. Maps, Olive, and Amy go into the tunnel that Colton found earlier to search for him. They smell fire and investigate. They find a burnt piece of paper with a drawing of Maps on it. They realize that Eric, who has a crush on Maps, has drawn it and realize that they must go to the Wedgewood Museum because that is the center of the mystery of the Arkham symbols.

Pomeline and Tristan are looking at the map. Moonlight comes through the window onto the paper. Which makes writing on the map appear. However, Eric enters the room using that piece of symbol ridden cloth as a cape and the Arkham symbol as an eye visor. Until next month…

The mystery behind the Arkham symbol and Eric’s connection to it deepen in the is issue. Writers Brenden Fletcher, Becky Cloonan, and Karl Kerschl are giving us a story full of magical maps, secret passages, and dire warnings. Surely some revelation is at hand. (Surely the Second Semester is at hand, Mr. Yeats). It feels like something terrible is coming to Gotham Academy and we are being pulled into the tide along with Olive, Maps and company.

While the story here seems to be very tight and moving forward at a solid pace, the relationships between the Detective Club characters is suffering. The heart of this book is the interplay between Olive and Maps, but so far this ‘semester’ the pair have been broken up partly due to the presence of Olive’s new troubled roommate Amy. Amy is a dark force that is influencing Olive in a negative way. There is some speculation (thanks Ian M.) that we are being Tyler Durden’ed here, but let’s continue to assume that Amy is a real character until proven otherwise. In any event, the situation takes away from the heart of Gotham Academy without providing any drama in its place.

The art in this issue is by Adam Archer, Sandra Hope, Msassyk and Serge Lapointe. This issue seems to be somewhat monochromatic, with a lot of dark blues and greens. The usual vividness is nowhere to be seen. As always, the art is excellent, but uncharacteristically uniform.

I am totally drawn into the story that is unfolding, but I do miss the camaraderie of the Detective Club. I was also confused by one panel where Kyle, Pom and Colton were waiting for Colton to be forced to leave the school. There seemed to be a female white haired marionette hanging from a tree with the Batsignal shining in the sky behind. That whole portion of the story was a little muddled, I’m not sure what exactly what supposed to be going on.