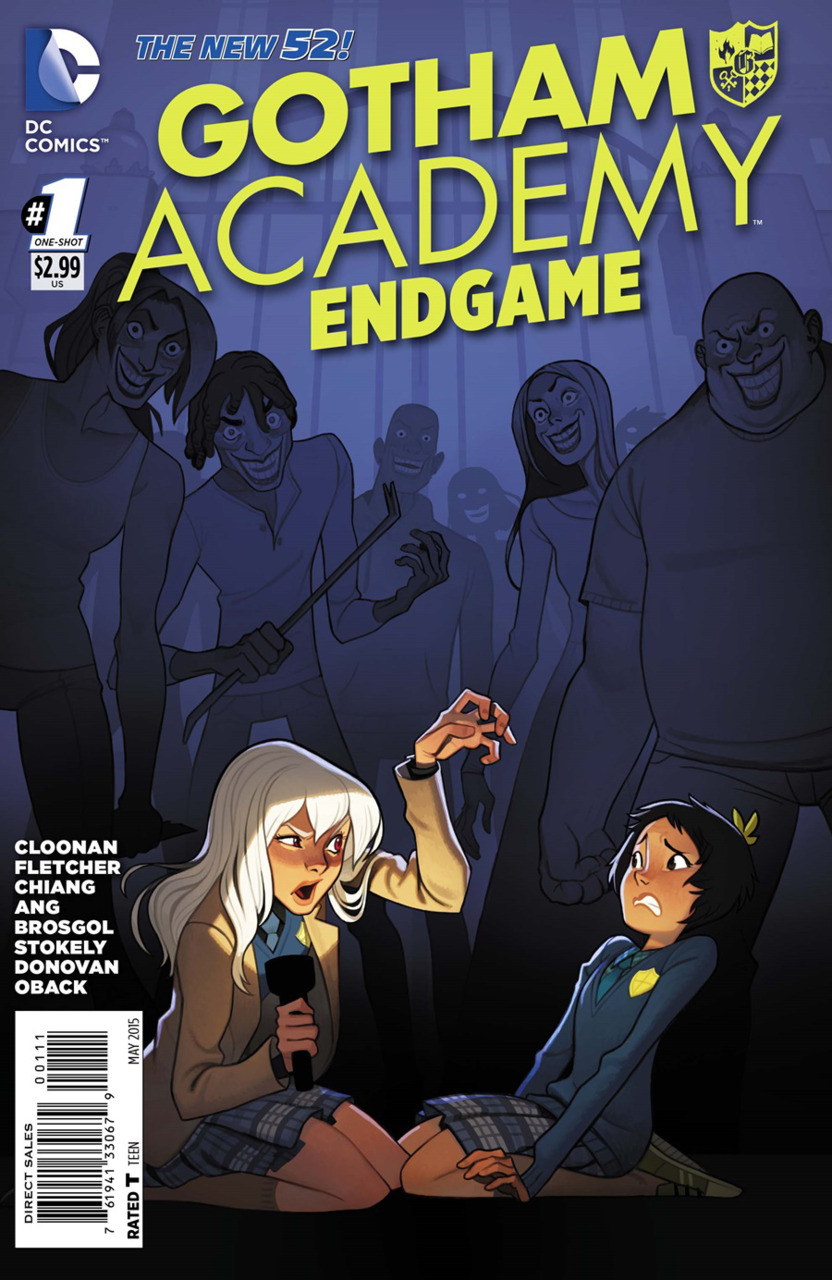 One of the highest praises that we can sing about a comic in 2015 is that it is original. Gotham Academy is a funny fresh perspective set in a universe that is rooted in over 75 years of history. Does it wear it’s influences of John Hughes movies and Harry Potter novels on it’s sleeve? Absolutely, but it’s a book that rarely ever feels reductive, trite, or cliche. Which is why you are so caught off guard when you start Gotham Academy: Endgame. Are writers Becky Cloonan and Brenden Fletcher really going to do the old  “kids sit around and tell ghost stories” trope? They do, and while this particular plot device has been well worn Cloonan and Fletcher still manage to turn Gotham Academy: Endgame into a very good tie-in comic.

Gotham Academy: Endgame opens with Gotham Academy on lockdown. The power has gone out across the campus and the craziness that we are seeing in Batman: Endgame is going on right outside the schools gates. Olive, Maps, Pomeline, and Professor MacPhearson are in the gym and don’t really seem to concerned with or worried that the Joker is trying to take over Gotham City. In order to pass the time the girls decide to tell scary stories that all elaborate on the Joker myth in some way.

Pomeline tells the first Joker story about a little boy who buys a haunted halloween mask. The art and writing duties are done by Clio Chang in this section and the art is pretty fantastic actually. The colors have a washed out look that really add to the story’s creepiness. Unfortunately this story seems VERY reminiscent of a R.L. Stine Goosebumps book. This doesn’t necessarily make this section bad but it certainly doesn’t feel original or surprising.

Professor MacPhearson goes next and tells the story of a Scottish Wandering Jester who puts on a gruesome act that includes juggling severed limbs, puppets made out of human face , and a “bagpipe made of rotting flesh”. Anyone who doesn’t laugh at the Jester’s act becomes one of his props. The art by Joy Ang in this section is incredible it’s clean cartoonish linework matched with the warm red and orange color palate act as an great contrast to the gruesome proceedings that take place at the end of the section.

In the final section Olive shares a story that her mother had told her when she was younger. It’s the story about the smiling man in the mirror. A student that Olive’s mother went to school with tried to summon the smiling man in a very “Bloody Mary-esque” fashion and it ends up being a terrible mistake as the student progressively starts to descend further and further into madness. Vera Brosgol handles the words and art in this section. Brosgol’s art style looks like it could be right at home in a all ages comic but mixed with the bizarre psychological horror of the story it’s elevated to one of the most disturbing things we’ve seen in Gotham Academy so far.

Overall this is a nice little anthology comic but it’s really just filler. It doesn’t really add any new insight into the characters but it really doesn’t have to. This is a tie-in. We are lucky if these things are even readable. Gotham Academy: Endgame is a very good tie-in comic, it’s probably the best Endgame tie in comic we will read this month, but it’s only an okay issue Gotham Academy.