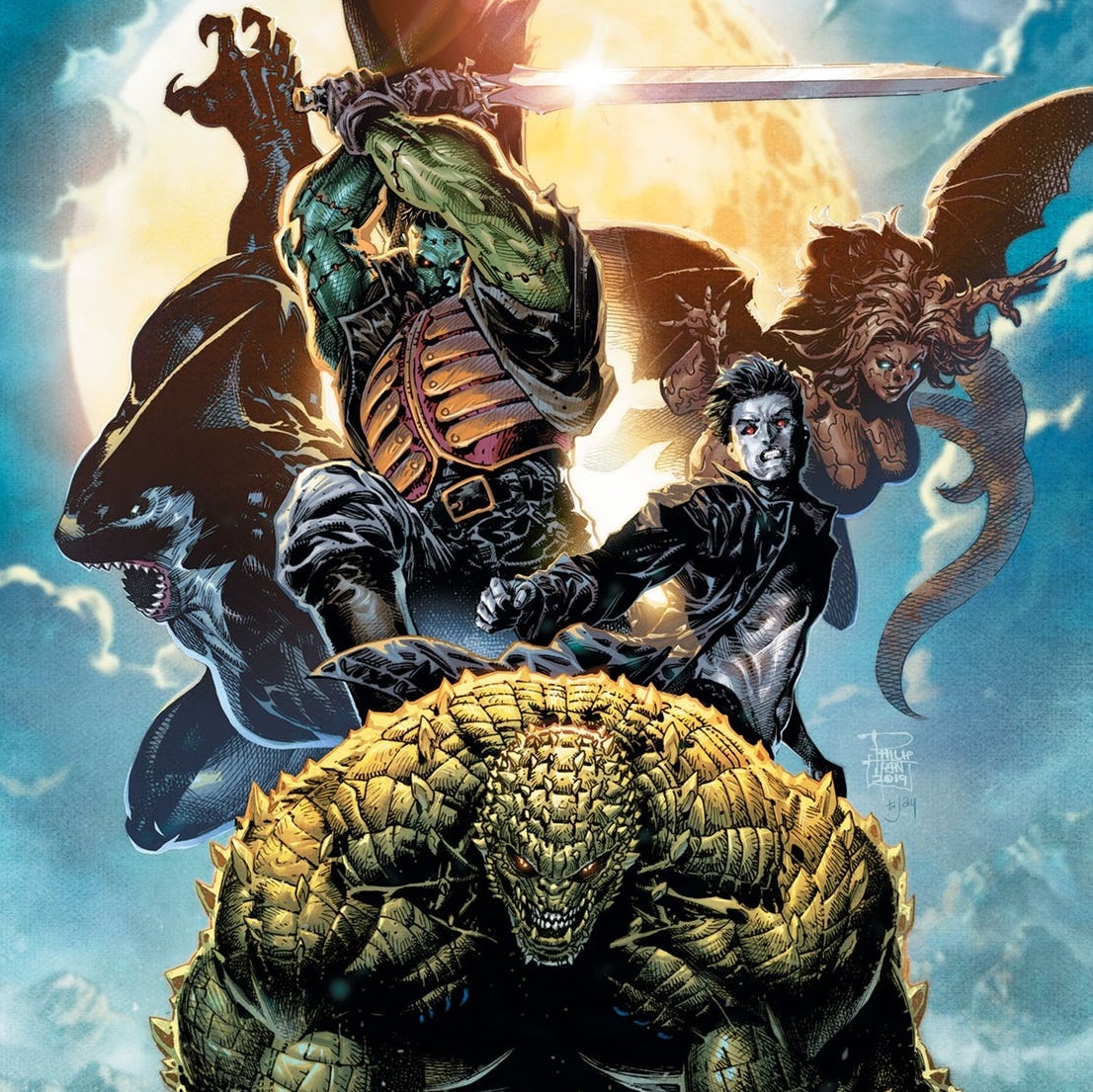 Overview: In Gotham City Monsters, a strange cult brings six monstrous creatures together to save a multiverse of possible versions of Gotham City.

Editor’s Note: This collected edition includes all six issues of the miniseries Gotham City Monsters that had its first issue released in November 2019 with the final issue releasing in April 2020. This review focuses on the story as a whole rather than the individual issues that made up the miniseries.

Synopsis (spoilers ahead): Gotham City Monsters takes place during the events of City of Bane.  The area called Monstertown has become a haven for the lost and rejected of Gotham City.  Underneath a battle rages.  Andrew Bennett is fighting a group of vampires, vampires that used to follow him but they have found a new king.  Bennett goes for the neck of one of the creatures but he quickly finds that his blood is tainted.  The “victim” tells him that he was bled from a new sire and Bennett goes in search of the new king.

Croc has finally fulfilled his debt to the Suicide Squad and he returns for a fresh start.  He meets his friend and benefactor Tusk at the hotel.  Tusk suggests they take in a show and Croc declines, he has some job interviews to prepare for.

At a nearby bar, a fight erupts.  Frankenstein picks a fight.  He burns his adversary and notices that some of his blood starts to reach away from him.  Its donor calls and a strange primate looks on across the street.

At Gotham harbor, Orca is protecting her domain.  She yanks a leg and it rips in her hand, it is made of clay?  She returns to her cave.  She keeps a photo of her nephew, she has not seen him and she wants to desperately but she is afraid he will be terrified of her.

In the skies above we find Lady Clay.  She recounts her history and she admits that she sends out parts of her to experience life and one part has a ticket to the show at the Magus, the same one Tusk mentioned earlier.

Frankenstein engages the primate spy.  He questions the animal what it is doing and it responds that there is an opera at the Magus and he would love it if he attended.  Frank kills the creature and arrives at the Magus, he has no intention of entering but he is met by someone else, Bennett.

Frank names the “he” as Melmoth and Bennett learns the adversary’s name for the first time.  Some kind of ceremony is being planned during the opera, a ceremony that will release Melmoth but for what purpose?    Frank realizes that Bennett has been tainted by Melmoth’s blood and cuts him in half in an attempt to stop him.  Bennett is a vampire and this does not kill him, just makes him angrier.

Inside the ceremony starts and the audience including Orca’s nephew, Tusk, and the part of Lady Clay that is killed.  All this while the protector of the theatre, the ghost, the Red Phantom looks on trapped in a case and unable to prevent this crime from occurring.  The roof blows off the theatre. And Frank prepares to face off with his former “Lord”.  The Red Phantom breaks out and attacks Melmoth’s acolytes and Frank and Bennett jump down and enter the fight.  Elsewhere, Lady Clay realizes that a part of her is missing.  In her cave Orca questions a poaching pirate.  She hears a new report of the tragedy at the Magus Theatre.  Jonah her nephew was going there to see the show. Inside the theatre, Melmoth and his minions escape leaving only Frank, Bennett, and the Red Phantom standing.  Everyone in the theatre including Tusk, Jonah, and the part of Lady Clay is dead.  Bennett decides to deal with Melmoth alone.  Frank says he will regret it and Red Phantom agrees to join Frankenstein.  Frank goes to recruit his army including Lady Clay, Orca, and Croc.

Melmoth goes beneath Monstertown in the Tomb of Gotham.  Bennett attacks but he soon regrets it, his body is now controlled by Melmoth because of the blood he ingested.   Frank who also has Melmoth’s blood in his veins while remaining fully in control of his body leads the others to the Tomb of Gotham.

Melmoth reveals his plan.  He has the Crime Bible, with the right amount of honest blood he can use it to heal the Multiverse and repair the Source Wall but it will cost the lives in Gotham and possibly all the Gothams of the Multiverse but trillions will live.

The five break into the Tomb but Melmoth has already gone to the Gotham Zoo.  His acolytes attack two guards, they are the first “volunteers” to donate their blood to the bible.  Frank’s team arrives and Bennett and the acolytes hold them off while Melmoth chases the guards.  Melmoth kills the guards, collecting their blood, and vanishes.  Bennett is left alive and he is temporarily freed from Melmoth’s control but when he is in the monster’s presence, he will lose control again.  They now have six but they need a seventh.

Melmoth continues to gather the blood of innocence while a new figure races through the streets of Monstertown; Batwoman.  She is attacked by the monsters and Frankenstein recruits her help.  In the Batcave under Gotham Harbor, she is able to neutralize the toxins in Bennett’s blood that makes him susceptible to Melmoth’s control and she agrees to join Frank’s team.  Now using both Bennet and Frank as compasses, the seven warriors meet Melmoth.  They are now attacked by the Monster League of Evil.

The good monsters win and Melmoth loses more of his forces in the process but he is not finished.  He has kidnapped two teachers, the last of the blood he needs and he has taken them to Slaughter Swamp.  Melmoth resurrects the Grundys to be his army here and Frank’s army gathers to Slaughter Swamp.  Frankenstein is seemingly betrayed by Killer Croc and stabbed through the back.

It was a ploy to get Croc close to Melmoth to strike a blow.  Batwoman takes her chance and kicks in several of Melmoth’s teeth.  The monsters win and stop Melmoth and free the teachers.  We see the monsters clean up loose ends but when they are needed, they will reunite as the Heroes Most Monstrous.

Analysis: Gotham City Monsters is a great story but I would have preferred it to be more stand-alone than it is written as.  It is linked to the events of Perpetua and the after-effects of Metal and the beginning of Death Metal.  I would have preferred this to be about these characters uniting to answer a tragedy instead of a convoluted plan to repair the source wall and save the fractured Multiverse.  That motivation takes away the allure of these characters getting together.  Their motivation is not the repair of the source wall but to take down a force that led to so much personal death and heartbreak for these characters.

We do get great character development and each character gets their moment except for Batwoman.  She is useful and it is fun to see her but she really is a plot device to get Andrew Bennett freedom to join Frank’s band.  After her cure, she becomes an unnecessary addition to the story that may have been more appropriately taken by Man-Bat, a scientist that could have come up with the idea that just consisted of Bennett biting Frank.  This is more a story of these monsters getting together and dealing with who they are.  Lady Clay trying to find who she is outside of KOBRA, Red Phantom trying to come to terms with the tragedy in his theatre, Orca wanting to meet her nephew who sadly is killed.  The best times in Gotham City Monsters are the character moments that I do gloss over in my recap just to cover the action but I really recommend these interactions.  Batwoman does have a few good scenes with Lady Clay and I would have liked to see more of these relationships.  Lady Clay even takes the brick from the theatre, the device that is used to allow the Red Phantom, who is bound to the bricks of the theatre to join the monsters in their hunt, and sink it inside herself so the phantom can be present with her.

The art is descriptive and shows the action very well.  The style is the standard superhero fare but it is very effective.  We also see action across Monstertown and a little outside as well.  The action is graphic but this is a supernatural story involving some of the most violent monsters in comics so it is appropriate that there is a lot of bloodshed.

Editor’s Note: DC Comics provided TBU with copies of the original issues of this series as they released, but not of this new edition. You can find this collected edition and help support TBU in the process by purchasing this edition digitally either through Comixology or Amazon, or as a physical copy in a paperback form at Amazon.

Steve Orlando and Amancay Kahuelpan craft an entertaining story that centers on the more monstrous aspects and characters of Gotham City. Overall, Gotham City Monsters is fun but I would have liked this story to not be tied to continuity.