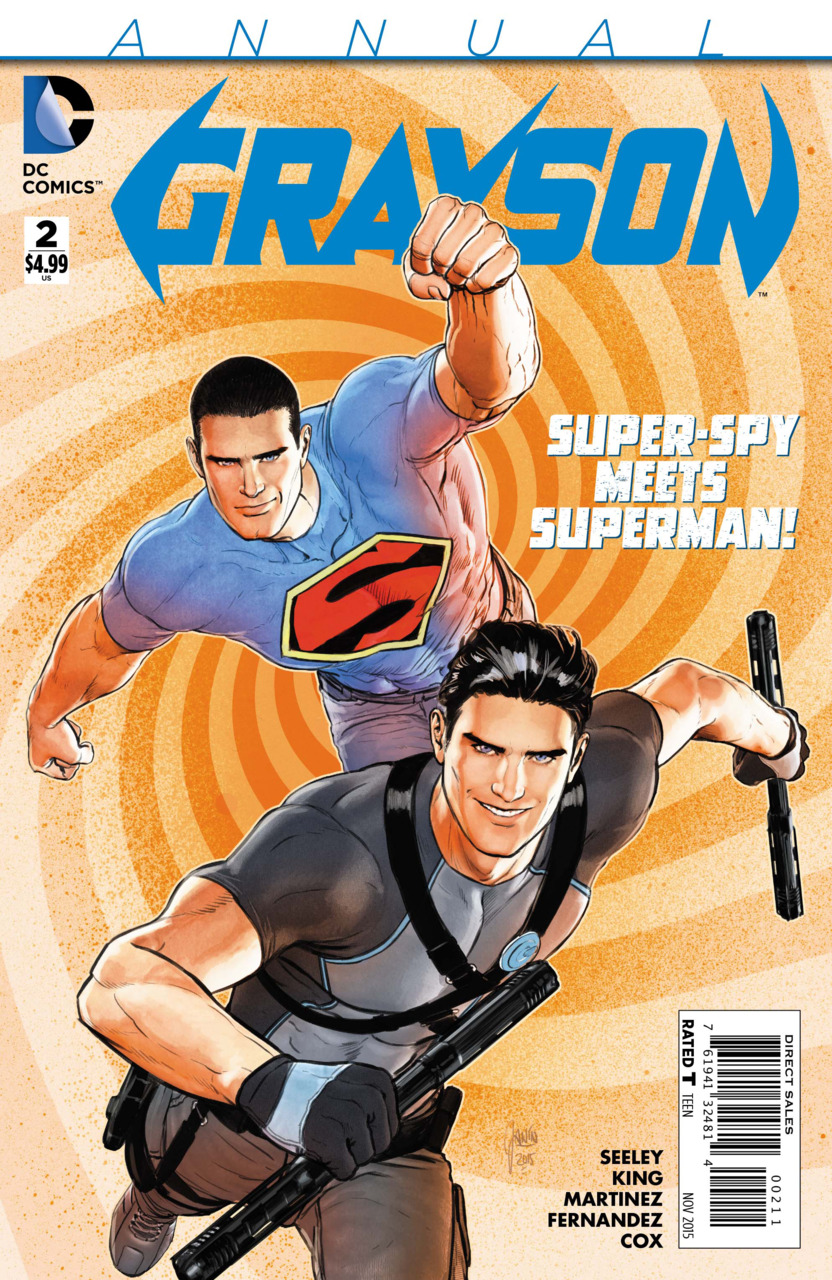 We get another one-shot story in this annual told by Tim Seeley (series regular), so that was nice with it somewhat continuing the main story without being necessary to pick up. I am starting to think they should get rid of annuals, though and just do oversized specials when another writer has something that they really want to write for that character. Because I don’t think I would want to spend five or six bucks for a story that’s just — meh. Now, I do think that Seeley did have fun this issue, and it was nice seeing Dick get to interact with Clark again…but I really just don’t like what they are doing with Superman right now. I was positive in giving the new direction a shot, but I want old Clark back. And I even felt as though it held the story back, which is why I bring it up here. I do like the relationship between the two characters, and I’d like to see more of this. The pencils are done by Alvaro Martinez, inks by Raul Fernandez, and colors by series regular Jeremy Cox. Cox does a great job of giving it a nice consistent feel that has continued throughout the series. The inks are very clean, which also blends well with Mikel Janin’s style. And Alvaro Martinez did a great job of storytelling, and it looked as though he enjoyed himself as well.

The story opens up several years ago, when Dick was Robin. Batman and Robin are racing on their motorcycles throughout Gotham, following a trail of destruction. They catch the eye of Blockbuster, who chases after the two up an overpass. Suddenly, he hits a wall of an inhibitor reactor, which takes away some of his strength. Superman then swoops in (as planned) and takes Blockbuster down with a single punch. Batman tells Dick it’s time to leave – the cops can handle Blockbuster, and Superman will take the “glory”. Dick enjoys working with Superman, but Bruce lets him know that he doesn’t trust him because he is an alien.

Today, Dick is at the top of Beacon (no, unfortunately that’s not Bacon) Tower, saying goodbye to Gotham with one “last dance” (a jump off of the top). During Dick’s stylish fall, an unaware Superman just happens to hop on by, and “rescues” Dick. As he looks at his face, he freaks out when he sees a swirl, and drops him. Dick lands just fine, and shows Clark who who he is. Clark is happy to see him, and gives him a hug. Dick tells him he’s working for a secret agency, Clark explains that he lost his powers, and then got a shirt and a bike…

Suddenly the Fist of Cain show up so Clark and Dick team up to take them down. Some of the more memorable moments: 1) Clark punches a missile, which blows them into a building across the street. 2) The duo jump on Clark’s bike, Lana, and Dick distracts a female member of the organization by letting her see his face, and winking at her… She wrecks her bike because of this.

Blockbuster shows up, as the Fist of Cain is in control. They group get the duo trapped in an underground bunker. An inhibitor is available, but they don’t know how to fix it. Dick reflects on getting the name “Nightwing” from the tales Clark used to tell. Clark comes up with an idea – they call Lex Luthor, and he can walk them through it. Dick doesn’t fell comfortable with this, as Lex is the guy who “killed” him. He ends up trusting in Clark, and they piece the inhibitor together. They turn it on, weakening all of Fist of Cain, and take them down easily. Dick then asks Clark for a hop to the airport so he can get back to work.