Review: Harley Quinn: Be Careful What You Wish For #1 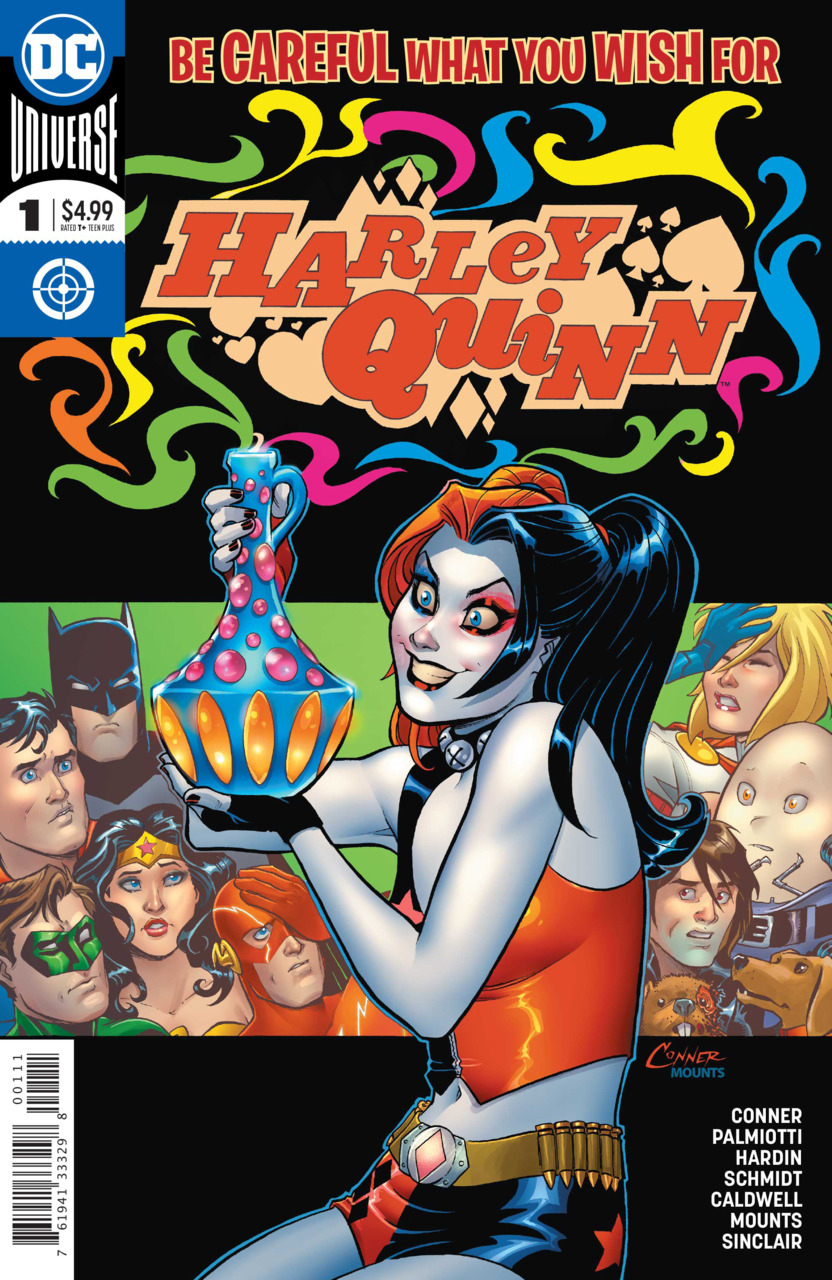 Overview: Harley Quinn finds a Genie in a bottle and causes havoc throughout Coney Island and beyond in her final special from the amazing team of Amanda Conner and Jimmy Palmiotti.

Synopsis (spoilers ahead): Harley and her pals are on the Coney Island beach enjoying a nice summer day when Harley is poked in the butt by a medical syringe. Big Tony has been doing beach clean up and says that there are some ships out at sea that are dumping garbage into the water. Harley takes a boat out into the shipping lanes and sinks one cargo ship with a bazooka. Ooops.

The explosion sends her into the briny deep and she is rescued by the nearby Power Girl. During her mishap she found an exotic looking corked bottle. She heads under the boardwalk and uncorks it. A Genie, Jimm Salabim, emerges in a puff of smoke. He offers her all the wishes she desires. What could go wrong?

First she wishes for some shish kebabs. They are delicious. Then she wishes for larger breasts like Power Girl. This doesn’t go as well because it interferes with her sense of balance so she wishes to be returned to her natural self. She takes Jimm home and introduces him to her stuffed beaver Bernie. She wishes Bernie to be brought to live which he is, briefly. It turns out that the hole in Bernie’s head re-killed him.

She then wishes that Mr. J is transformed into a nice, sensitive man. He is, but this version of Joker bores Harley to tears. She then wishes to join the Justice League but the super team is aghast at her murderous ways. She then goes through a number of wishes that turn out badly including: being able to talk to animals, heading to a tropical island with her male doppelganger, being a baby, and having a bio-pic made of her life.

She is disgusted by the lame results of her wishes and decides to wish that Jimm was a human not a Genie. He complies. She then has to help Jimm deal with being a human including the joys of pizza and human toilet habits. It turns out that he is an excellent cook. The two bond over shish kebabs in the moonlight.

Analysis: This is the final week of Harley Quinn comics as written by the team of Amanda Conner and Jimmy Palmiotti. Overall it has been an amazing run which at times saw Harley’s comic sales rival Batman’s. They have done an amazing job fleshing out her character and giving the next writer, Frank Tieri, a fantastic base to work off of.

This story is zany and lighthearted. Highlights include the baby Harley sequence and the talking animal section. Harley is fun loving but also self centered, which is her fault and charm. Her dislike of a man just like her is ironic and good for laughs. It is kind of mean of her to turn the Genie into a human, but this and her compassion for him afterwards is pure Harley.

Artists Amanda Conner, Chad Hardin, Otto Schmidt and Ben Caldwell are joined by colorists Otto Schmidt, Ben Caldwell, Alex Sinclair, and <cough> my favorite colorist <cough> Paul Mounts. The art in the main book is of the high quality we Harley Quinn fans have come to expect on the book. Overall, the lines are clear and the story is expertly depicted.

The different artists take different portions of the book and they all work well together. The baby sequence which, if my math is correct, was done by Ben Caldwell is the most stylistically different of the sections of the book and is a solid change of pace. In my personal opinion though, nothing beats the team of Conner and Mounts and their portions are the best. I’ve said this before in my Harley reviews, but no one colors Harley’s skin like Paul Mounts. He makes her look like she is carved out of ivory. They don’t disappoint here.

As much as I liked this comic, it isn’t a world-beater. It is a solid story that is entertaining and depicts one of the best characters in comics in a way I have come to expect from this team. I am judging this book much more strictly than I would from another team because they have shown that they have the ability to do amazing things. That being said, I do recommend this book and will certainly miss Conner and Palmiotti’s Harley Quinn.