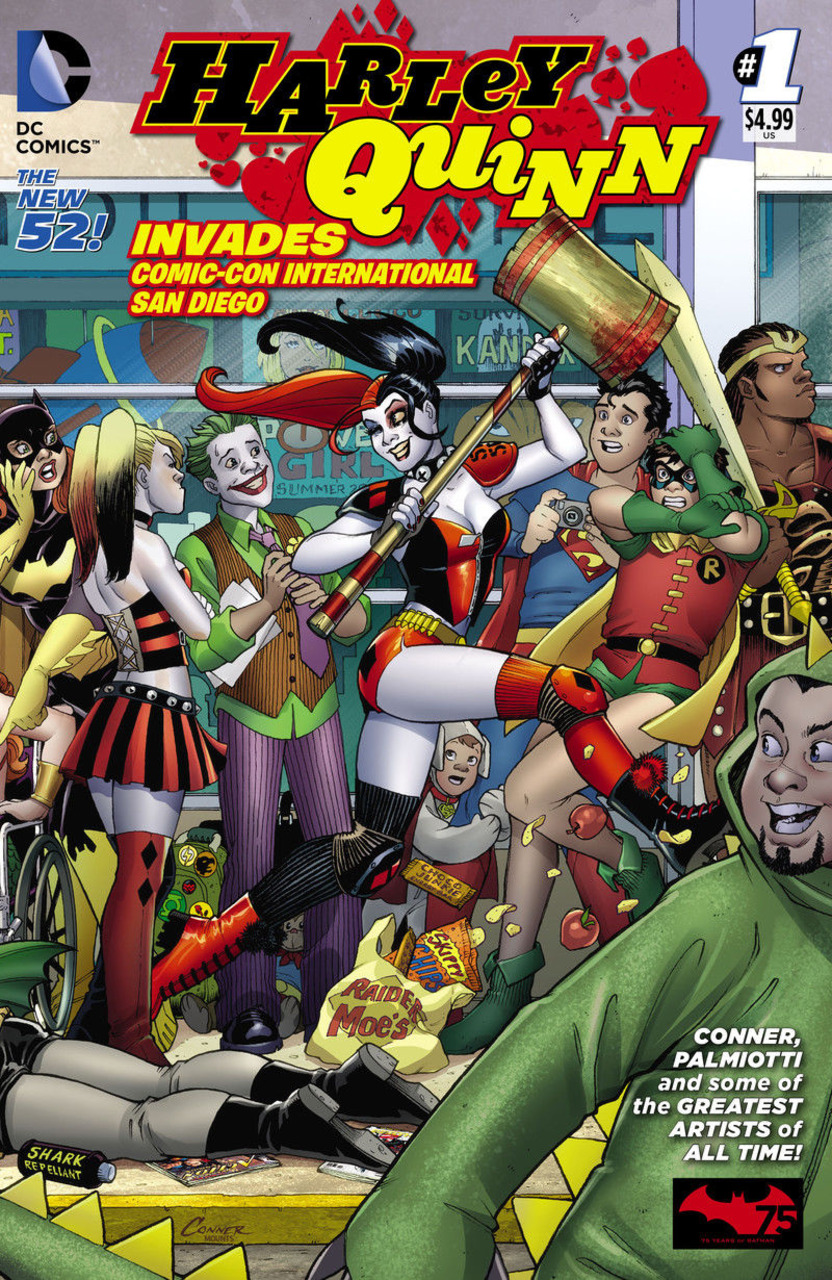 When reviewing a comic, you have to first figure out what the book is trying to accomplish. You can't stick to all the same rules, because really not all books follow them. So when I read Harley Quinn, I have to base it more on an enjoyment level. It's not going for an epic story. It's trying to have a good time. This special Harley Quinn one-shot, accomplished on that. It's really, really fun. It shows the downs (lots of downs) to time spent at Comic-Con, and the few ups (which somehow overcome the downs). It also takes full advantage by making fun of some people over at DC and comic book fans.

There are so many artists this issue. Making it he second issue that Palmiotti & Conner have orchestrated where there have been countless artists in a single issue, but if you are going to do that, this is how it's done. It's done in a way that doesn't disrupt the flow of reading. It actually breaks in between days, so that it helps with the reading.

Harley & her crew from Coney Island are setting up a booth at Comic-Con. When settling in at the hotel, Harley shows one of her buddies her comic she drew. She's hoping to show to show an editor, and possiblly get a gig. She showers, and then hits the town of San Diego, to explore. She gets hit by a truck driver, steals his truck, and gives away all the clothes inside to homeless people. She goes out to a restaurant and beats up a waitress for being rude, when the waitress explains that the place is called Rude Rick's. That's what they do, and Harley orders.

Harley gets her badge, and goes into the convention. She sees Batman (who is a cosplayer, but she doesn't know that) and she de-pants him. She sees that he is wearing Harley underwear, and she thinks Batman has a secret crush on her. She gets thrown out of the convention, and a girl dressed up as Cheetah tells her that Joker is waiting for her in a room. Harley breaks into the convention by riding a balloon into the building. She escapes security, and makes her way into a room full of Joker cosplayers. Harley then does who knows what to all of them, and they all seemed to enjoy it.

Harley is helping her crew sell shirts, but people irritate her, so she beats them up and gets thrown out. That night, she falls asleep, and misses dinner with her friends. She heads to town, when she is picked up by a Harley Quinn fan club. They cause chaos, get into trouble, but Harley thinks the police are strippers. She accidentally shoots a cop in the butt, and all of them are sent in for questioning. Since they all look alike, they all get set free, as the cop can't tell who did it.

Harley is taking a break from the booth, when she comes across Dan Didio. He's talking about these new, expensive 4-D covers, when Harley comes up, photo bombs the shot, and is sent away. She fills out a slip to win a portfolio review with Jim Lee, and gets a tip that the editors are having a dinner across town. She steals the '66 Batmobile, but when she gets there, they tell her she's at the wrong place. But they lied…

Harley Quinn wins the portfolio review with Jim Lee!… So Harley waits in line with the others, until she is next. She slowly builds up anger with Jim Lee, thinking he is making fun of her, until he says that she does good stuff. Then she loves him again.

Harley is determined to get an autograph & a statue before the day is over. She sees a group surrounding Stephen Amell, and freaks out demanding an autograph. Only, she's not going to him. She's going to Paul Dini & Bruce Timm, who are behind Amell. She then makes her way to the collectables, and asks for Batman Adventures #12. The guy has it, and says it'll be $300 "take it or leave it"… So she takes it. All of it, and runs away. The end.

Very fun. In my opinion, the best of the Harley books, so far. Hopefully we will continue to get more fun books like this in the future. Also, look for Easter Eggs in the background art. Get. This. Book.