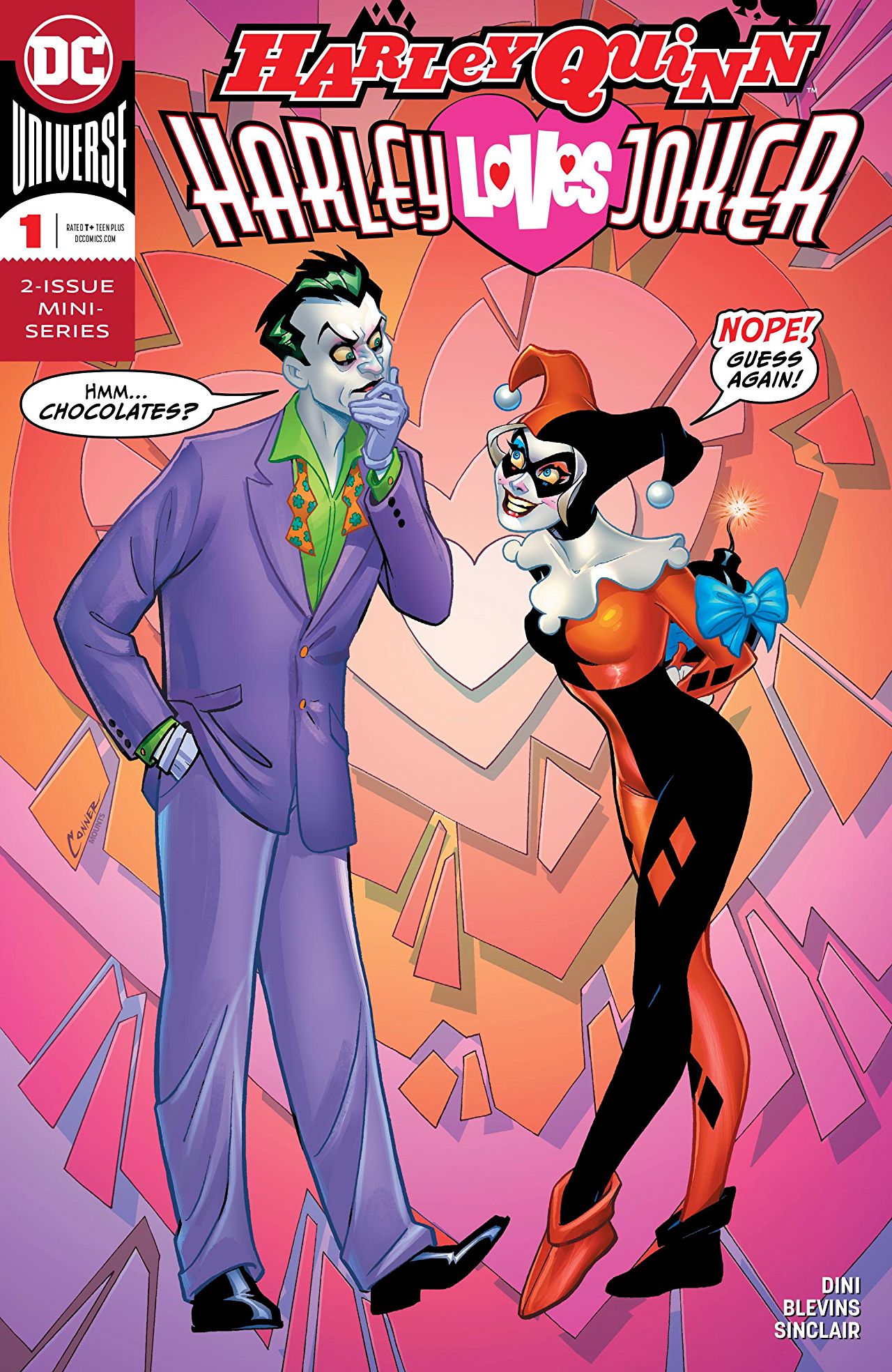 Overview: Harley and Joker are all moved into their new digs, but the prospect of the pad being blown up by the builders, and the appearance of a new rogue keep throwing a wrench in the works.

Synopsis (spoilers ahead): The action kicks off fresh from the set-up from Paul Dini’s backups in Harley Quinn, flashing back to when Joker and Harley were still an item, and after Harley has commissioned a new headquarters/lover’s nest for the couple after she accidentally blew their old locale to Batman! As cozy as she and Mister J are, the key problem is the bill! She hasn’t paid the builder, her friend Jenna from the Wonderland gang! If she doesn’t come up with the three million FAST, Jenna has rigged the place to blow! Using her natural ingenuity Harley realizes that some yuppies she scammed earlier are on a world cruise and should have some sweet valuables tucked up in their empty apartment! And they do – some nasty expensive art! Sadly for Harley though, the Wonderland gang also had the same idea and are also robbing the place blind – Harley’s purloined picture fetches nada!

Back at the Penguin’s Lounge, Joker is planning to set a trap to capture the mysterious Grison, a new rogue who has been robbing Gotham blind and taking all of the Joker’s action and fun. They successfully lure the Grison to the event, where she manages to nab the Penguin’s prize AND kidnap Harley!  We then are treated to a neat origin story of the Grison who knew Harley in college! Harley and Grison go way back – and not in a good way! A fight ensues and Harley eventually manages to subdue her – however, it then turns out the joke is on Harley, as they are actually in the headquarters Harley got built! Joker arrives, misanthropic, and is cheered by the Grison revealing that she intended to be “caught” and all the money and artifacts she’s gathered in her haul is presented to Joker! He then invites the Grison to join the gang, much to Harley’s chagrin!

Analysis: Coming fresh off the heels of the secondary mini-stories Paul Dini did at the back of some Conner-Palmiotti Harley issues expectations on this mini-series were fairly high. Dini is an accomplished writer who has delivered countless times on Harley and has rarely, if ever missed. His talent and his reputation go a long way in the industry. With that said, after a neat set-up and some absolutely gorgeous art, there was no doubt that this first issue in two issue series was thin on plot and seemed to be filling up pages that made what should have been a cool one shot. It quickly becomes apparent that after the neat set up where Harley must come up with three million in cold hard cash to avoid her new digs being blown up by the builder, Dini quickly runs out of story, and things descended into a catfight with the Grison. It’s not all bad as we do get a neat origin story and flashback to Harley’s days as a student with the young woman who went onto to become the Grison, but the empty nature of the catfight that takes up three pages just feels like filler.

But there are plenty of neat moments to be had here, Dini’s touch is still a quality one. Who could not appreciate the creepy cruelty of Joker who has killed his driver with his laughing gas after he dared to ask why the boss was sad, after a night of mix-ups and chaos disaster. There’s an edge underneath the comedic tones and the colourful gorgeous art props up a relationship that could take a dark turn at any moment. But the interactions are Three-Stooges-like, cartoonish and violent at the same. This is definitely a thin story that sails on strong art. Harley comes out of it best perhaps, Dini’s grasp on the character he created remains exact and slick, making up for a slight concept that should probably not have exceeded one issue.

Final Thoughts: One for the completists, this is nevertheless a fun addition to the Paul Dini Harley canon. If you love Harley, this is one to grab although I personally expected a bit more given the talent and characters involved. That Bret Blevins art though…magnificent.