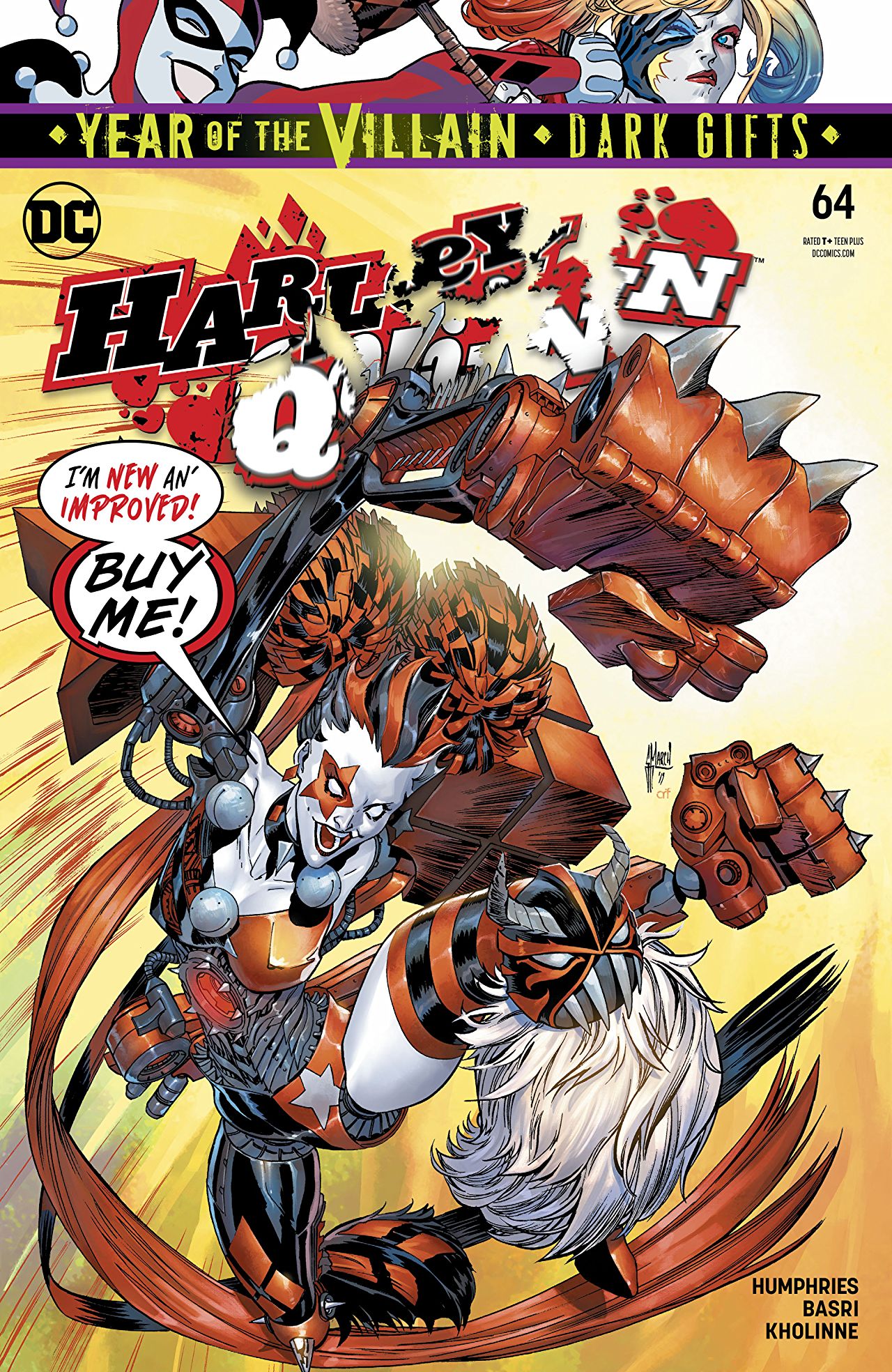 Synopsis (spoilers ahead): Welcome to the Year of the Villain event, currently crossing over with the Harley Quinn title! Harley is at her mother’s bedside, as she struggles with cancer treatment, telling her stories of her adventures in the comics. This story concerns Lex Luthor coming to Harley with his basic offer – which is to give Harley almost unlimited power and a kingdom in Gorilla City with all the trimmings. Harley rejects this offer, mad at Lexy for intruding into her story bubble with his cross-over plans. Lex quickly changes the offer to basically give her the mounted head of Joker for display on her mantel-piece, which she also strongly rejects.

The action shifts to a cartoon-like spy adventure with Lois and Clark, which Harley interrupts, closely followed by Lex, who is offering her things direct from her “most private tender internet searches”! Harley leaves the scene and guests in a Justice League Dark caper by the beach, with Lex still ghosting her every step!

The action then cuts back to the hospital room where Harley’s friends have gathered to support her and her sick mom. This includes Poison Ivy, Coach, Selina, her dad, Petite Tina, and more! Back to the comic story, Lex is on the DC Daily couch with Sam Humphries (also the real-life writer of this comic, although in the story Harley’s friend Meredith writes the title) who asks if only thirty-nine out of forty comics tie into a company-wide crossover is it still a big summer event?

Lex’s argument is that Harley isn’t in continuity and if you aren’t in continuity, you don’t matter. Harley reveals herself, dressed in Sam Humphries drag, and she blasts and batters Lex until suddenly Lex reveals his ultimate offer – he will cure her mother’s cancer because Apex Lex can do everything. Harley is tormented, and as she wrestles with the decision Death comes and touches Harley’s mother’s forehead, saying there was nothing she could have done, no one can escape death as that only happens in comic books.

Analysis: On the face of it, this is a strong issue, from a title that has been disappointedly, border-line average of late. By focusing in on the current emotional center of the book, namely Harley’s close bond with her sick mother, and then spinning out a circle of events relating to Year of the Villain, this is perhaps the most satisfying issue of Harley Quinn since Frank Tieri was on the book.  The scenes with Luthor across different aspects of the DC Universe are lightweight good fun, nothing is too serious, and Harley shatters the fourth wall more than she normally does, and this time, it works.  The comic book inside a comic gag works because it is done with a light touch – this isn’t trying to be too clever for its own good. It becomes a neat plot device to still have Harley interacting with the Year of a Villain event, while still being at a slight remove.

When Death comes at the end of the issue it’s shocking in its finality, it’s a rejection of the hope that Harley and her friends all had, that the course could be altered or reversed. The device of the comic within the comic becomes transformational and powerful – what had been a joke becomes deeply impactful, all within the space of two pages. It’s the best writing that Humphries has done in his run on Harley Quinn. I’m left wishing there was more of this to savor rather than just a couple of pages with a lot of filler beforehand.

Mention must also be made of the artwork which has contrasting styles as Harley traverses the different scenes and groups – in the absence of true comedy we see almost an abstract fourth-wall-breaking montage which the artist has worked hard on – there is precious little in the way of genuinely funny moments so for example in the Justice League Dark scene the art works hard to pay off gags that can only be described as slight. The reliance on inserting himself into the storyline could work out extremely poorly but the banter is fun. This is inside baseball, but at this point, sixty-four issues in, we all have our perspectives a little skew-whiff.

This comic is definitely one for the Harley fans who respond to her fourth wall breaking habits and like a bit of heart with their humor. I may still have misgivings about some of the directions Humphries takes the character but this issue is an improvement.

Final Thoughts: Perhaps a little too inside-baseball for its own good, but good fun. An improvement for the Harley Quinn title.