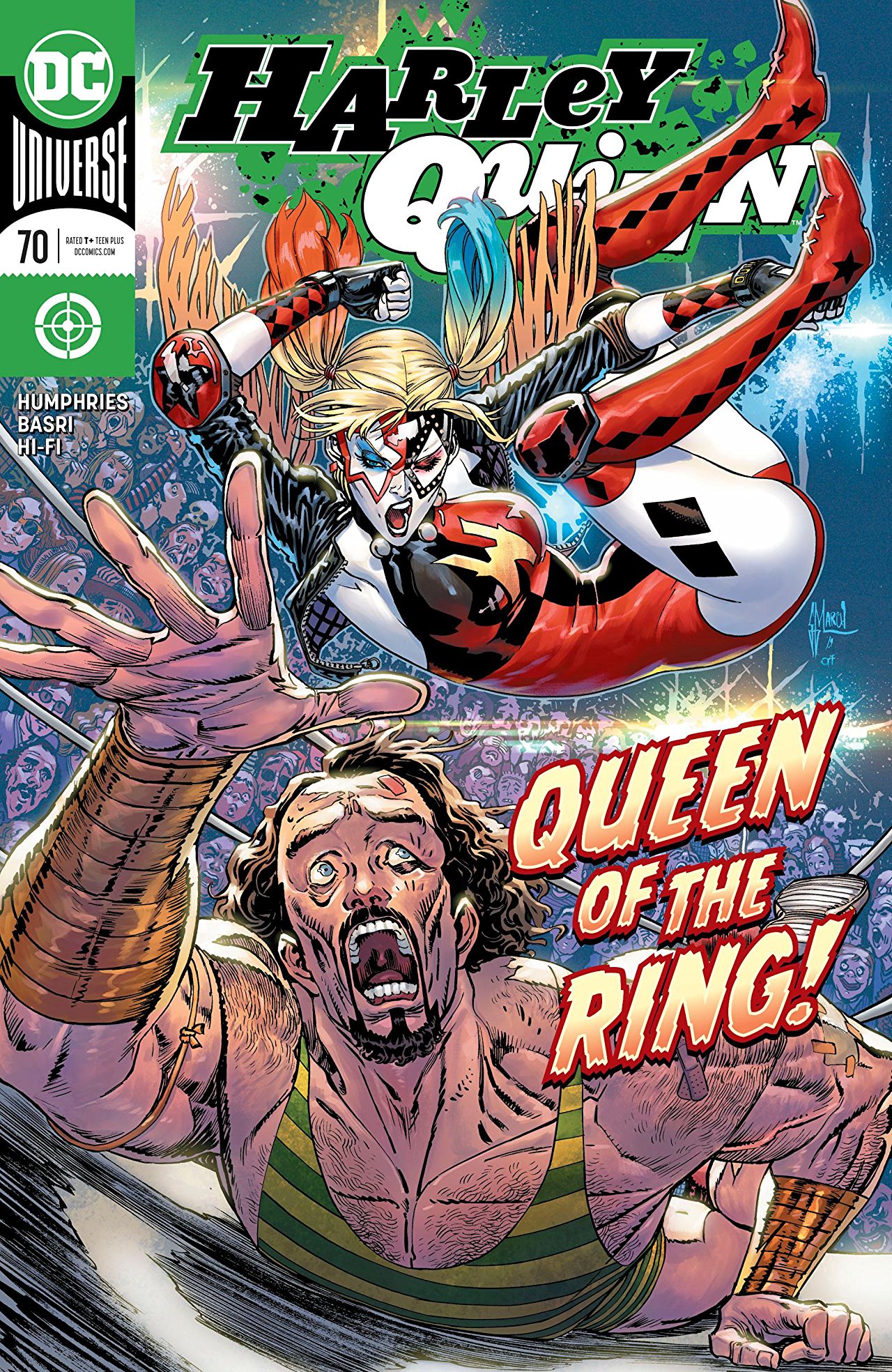 Overview: Harley Quinn flees to LA to escape her problems, becoming the wrestling “Queen Harleen,” and gets caught up in a murder and…Booster Gold?

Synopsis (spoilers ahead): Harley wakes up in a medical bed, with those around her saying she has massive injuries. She asks what happens when we die, and we cut to weeks ago, as Harley has become a professional wrestler in Los Angeles. We see her as Queen Harleen, using moves like the the Royal Clothesline and the Queen’s Guillotine. Though she easily beats her first opponent, an amphibian/reptile-esque character, his tag-team partner nearly finishes her, as Harley seems to accept punishment. At the last second, she tags in her own partner, Alicia the Crusher, holder of a huge gem called “The Jade Feather.” After the match, Harley and Alicia congratulate each other, but their wrestling manager tells them they have to fight each other next in a fixed fight.

Harley addresses the reader through the fourth wall, explaining that after her mother’s death, she needed a new direction, and wrestling gives her both fame and pain to distract her from her grief.

In the morning, Harley jokes with Alicia’s teen daughter Becca, but Alicia brings up the fight, saying she needs the money. Harley storms out, causes trouble at a bar, and finds Booster Gold (fresh from their dark adventures in Heroes in Crisis). Despite her hostile attitude, Booster convinces her to help Alicia and fight in the fixed match. She shows up but tells her friend to take off the Jade Feather, so it won’t be part of the fake fight. After the big show, which Harley plays in good grace, Harley dances in the locker room. She notices that the Jade Feather is missing from Alicia’s locker, and Alicia is lying murdered in the showers.

Analysis: After a cynically whimsical guest-written issue last time, regular writer Sam Humphries returns with a new story arc, playing with the heady mix of continuity in-jokes, wacky subculture, zany humor, genuine emotion, and fourth-wall breaking that he’s brought to this title since he started his run. Ably assisted by Sami Basri on art and Hi-Fi’s beautiful colors, Humphries has continued to walk the fine line of a Harley who used to be a villain, still has a moral compass which doesn’t quite point true north (but always points north-ish), but remains appealing for more than just sex appeal and humor (though she has both in spades as well).

This time, Humphries plays in the wild world of wrestling, creating a fun pastiche blend of wrestling and costumed adventurers (not all that dissimilar!). He paints a fun relationship between our murder victim, Alicia, and Harley, and even though it takes such a short time, Humphries also masterfully plays with Booster Gold in a post-Heroes in Crisis appearance (which should continue for this arc, according to solicitations), emphasizing the “bros before heroes” theme that Booster played with during that event. This team-up between Harley and Booster already has more interest in it than the by-the-numbers Harley and Ivy miniseries that officially follows up Heroes in Crisis, and I look forward to seeing how it plays out.

Overall, Humphries has a real gift for deft characterization, making us care about all of his characters and giving each of them a distinct personality no matter how short their time on screen is. There’s even an odd coincidence of Harley facing off against corrupt sports betting both in her comic and in the most recent episode of the DCUniverse animated show, though since Humphries works for DCUniverse, maybe he gets a chance to see scripts or episodes early. (Both this comic and the animated show are definitely recommended.)

Sami Basri’s art is simply gorgeous for this book. He makes every character appealing, even the evil wrestling announcer and the reptile/frog thing Harley fights. A strong line, really excellent face acting and general style, all come together with Humphries’ cinematic script to make one of the best comics to read on a visual level right now. The transition from Harley, battered and bruised, to Harley falling through black LA cityscape, into the stark and garish colors of the wrestling ring is jarringly beautiful. Humphries and Basri also play with pure drama in the final few pages, with the violence of Alicia’s murder, and the wry nod to Tom King’s credits in Batman – “DC Comics Proudly Presents The New Harley Quinn Epic.”

Guillem March provides the main cover again, and like the last issue’s hamburger cover, it’s funny, dramatic, and sexy – perfect for Harley’s comic. Sadly, it is a bit frustrating that it’s Harley wrestling with a random man when she spends the majority of her time in the ring fighting with specific characters who would have looked great on the cover. The Frank Cho variant cover is beautiful, though not representative of anything inside – instead, it’s a clever Valentine’s Day joke about Harley fighting Cupid.