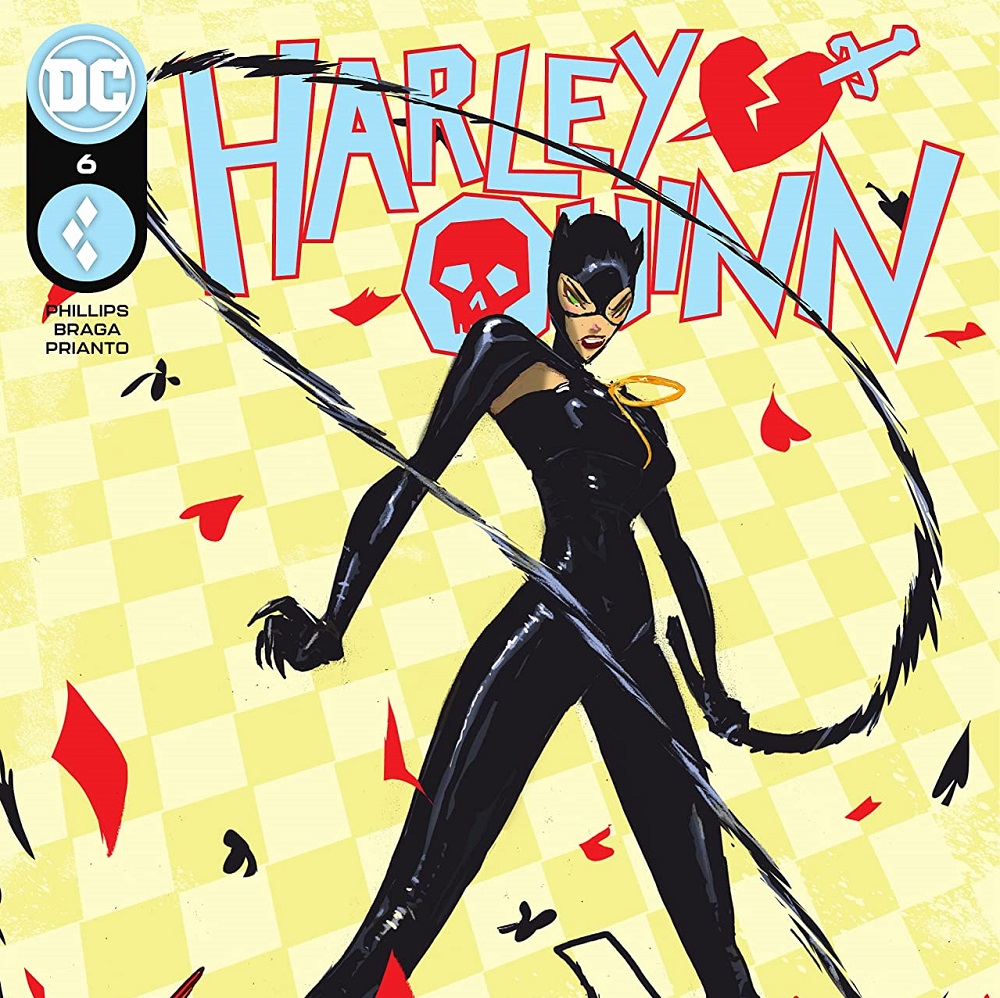 Synopsis (spoilers ahead): As Harley Quinn #6 begins, Peacekeepers are chasing Harley down the street. She is musing about cats and makes a Jewish mother joke. She hits a dead end and turns to face the mass of antagonists just as Catwoman swoops in. Together, the duo makes short work of the Peacekeepers. Harley begins to flirt with Catwoman, but Catwoman immobilizes her and demands to know what she is doing in Alleytown. Harley tells Cat that she has traced the supply of drugs that Hugo Strange is using to Alleytown.

Catwoman turns to leave, but Harley begs her to help, finally convincing Catwoman by promising that if she helps, Harley will never return to Alleytown. In Gotham at S.A.F.E. Headquarters, Dr. Strange is meeting with Scarecrow. Eventually, Keepsake reveals himself, and Scarecrow is enraged when he discovers that Keepsake has been stealing his fear toxin.

In Alleytown, Cat and Harley are preparing to enter the building where they have traced the drugs. Catwoman wants to plan, but Harley swoops in, intent on causing a distraction. They take on the masked goons and make their way outside to a van with a large number of drugs inside. Augustus Lockwood appears, and Catwoman pummels him. Lockwood throws a vial of fear toxin at her. Harley pushes Catwoman out of the way and takes the full vial in her face.

Harley wakes up in Catwoman’s apartment, and over coffee, they discuss the fact that an emergency antidote Cat carries (from Batman) and Harley’s resistance to poisons from spending so much time with Poison Ivy countered the worst effects of the fear toxin. They discuss the possibility of redemption, and Catwoman soars off into the night, leaving Harley to muse upon how “cool” she is.

Analysis: I mean, it’s Harley Quinn and Catwoman. It is difficult to make this pairing bad. Most of the book features dialogue between Harley and Selina, and that is exactly the right choice. These two characters are both incredibly strong, bright, complex, and dynamic, and it’s terrific for the audience to have a chance to sit back and listen to their conversation. Catwoman is dubious of Harley on a variety of levels, but Harley’s charisma and goofy charm prove impossible to resist, even for a loner like Selina.

Writer Stephanie Phillips continues to sketch a Harley that I want to see. There is nothing simple or vapid about this Harley. You can tell that Phillips genuinely loves and respects Harley, and the resulting character honestly feels like a real person. Harley is also growing into her new role as an antihero, and you can see her confidence grow with every caper and effort she makes. She even manages to share a key insight with Selina regarding the difference between looking back and facing ahead. The final panels foreshadow the forthcoming reunion with Ivy in Fear State, and it will be fascinating to see how Phillips handles the effects on this new Harley.

Finally, Laura Braga’s art is a welcome respite from the moony, cartoonish Harley favored by Riley Rossmo. But neither of these, and perhaps no Harley other than Stjepan Šejić’s Harleen, is rendered anywhere close to the incredible representation visible in Jorge Jiménez’s Batman right now.