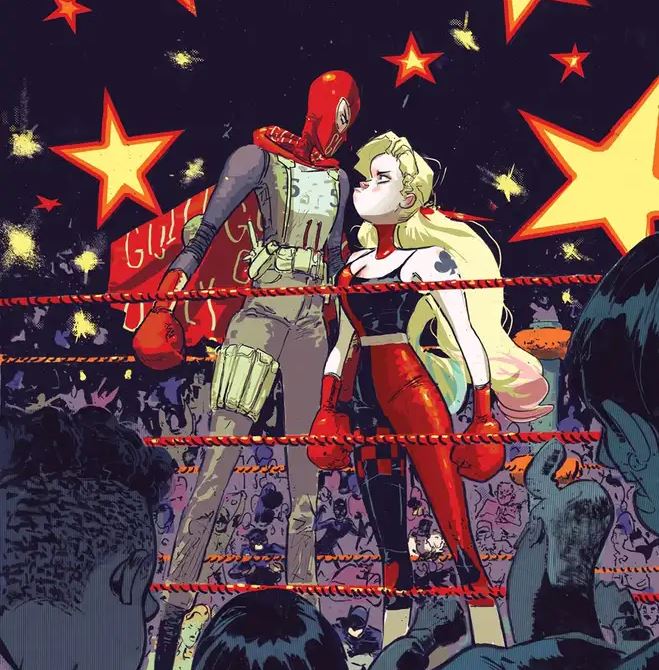 Overview: In Harley Quinn #17, Harley finally bests the villainous Verdict with a little help from her friends.

Synopsis (spoilers ahead): As Harley Quinn #17 begins, a gloved-up Harley is squaring off against Verdict in a boxing ring. The crowd is cheering her on, but Verdict is pummeling her. Her coach, Wildcat, keeps telling her to keep her hands up, but Harley objects to this most generic advice. Poison Ivy appears inside of her “injury-induced hallucination” and cheers her on as well.  Harley goes after Verdict and knocks her down, but Verdict pulls a firearm and shoots. Harley wakes up from her nightmare to find Kevin, Batwoman, and Leslie Thompkins surrounding her in her own bed. They discuss the search for Verdict, and Harley demands to know whether Kevin knew that Sam was Verdict. He assures her that he had no idea, which the audience knows is the truth.

Officer Shaw appears and asks Batwoman to step outside. Kevin and Harley are left alone, and Harley assures Kevin that he did nothing wrong in opening himself up and making himself vulnerable to Sam. They embrace. Then Kevin informs Harley that she was evicted from her apartment in Little Santa Prisca. He retrieved all of her belongings, including the ivy plant about which she specifically inquires.

Batwoman interrupts to inform them that Verdict is making a last stand by taking City Hall hostage.  She reluctantly takes Harley along, and they move through the sewer to an access tunnel. Batwoman instructs Harley to stick to the plan, which requires Harley to clear the building of all hostages. Harley assures Batwoman that she will stick to the plan, but as soon as Batwoman begins defusing bombs, Harley declares her intention to beat Verdict senseless with her trusty bat and skips off.

Inside City Hall, Verdict is urging Mayor Nakano to press the button on her detonator. Harley soars in, and they begin fighting.  Just as Verdict gets the upper hand, Kevin bursts in with the SWAT team close behind. They argue, but she is resolute. Kevin tells her to press the button, which she does, but nothing happens. Kevin officially breaks up with her. Harley gets up with a wicked right cross.

Verdict is apprehended, and the danger is past. Batwoman tells Harley that she did a good job despite not sticking to the plan. Harley invites her to brunch, and Batwoman replies that she will call. Mayor Nakano approaches and informs Harley that her name is cleared and that his office will issue a public apology. Harley and Kevin walk off, proud of themselves and each other – and Harley affirms that she is proud to be Harley Quinn.

Analysis: The Verdict arc reaches the end in Harley Quinn #17, and writer Stephanie Phillips does a nice job of tying together various strands. The friendship between Kevin and Harley has emerged as one of the strongest themes of the book, which is a surprise to me as I initially did not care for it. It is genuine and complicated, and, to be honest, it is refreshing to see two flawed former villains treat each other with kindness, respect, and compassion.

I was very happy to see Batwoman return in this book, as I find the possibilities between she and Harley to be quite exciting, and I am looking forward to seeing what happens after they brunch. Regular readers know I do not care for artist Riley Rossmo’s style, but I find his portrayal of Batwoman to be borderline ridiculous – a mass of sharp angles with a literal mane of red hair. While Rossmo’s style suits the dynamism and movement of Harley, it does not work with the more staid Batwoman, and I wish for a bit more reserve in how Batwoman is represented.

Finally, it is noteworthy that Mayor Nakano officially apologizes to Harley. This does not complete her redemption – it is not clear what would – but it does represent an important step in how Harley is perceived by Gotham’s political elite and further solidifies her position within the Bat-Family.

This is a satisfying finish to the Verdict arc and remains a well-crafted and interesting book. The complex and multidimensional Harley we are getting is exactly what the character deserves.