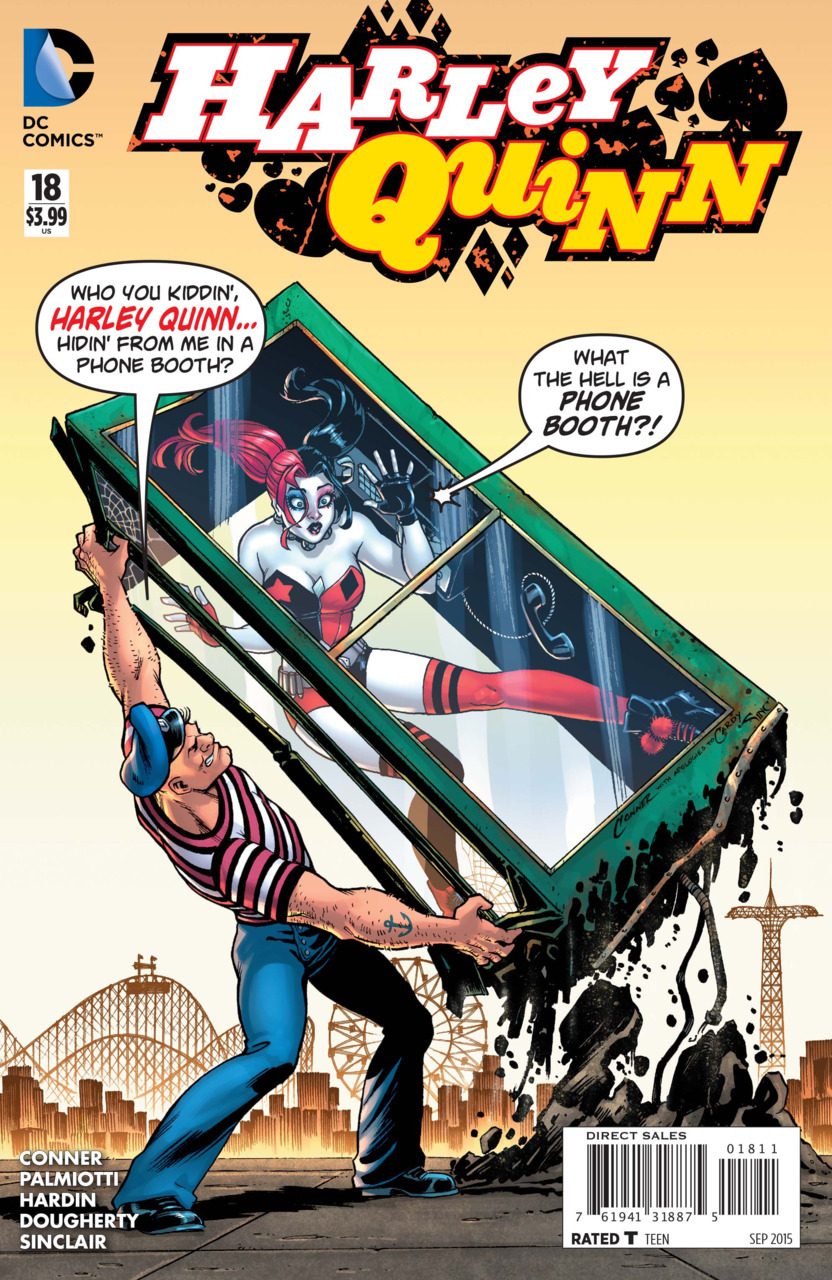 Harley and the Gang combine forces to subdue the glowing-seaweed-crazed Captain Horatio Strong in Harley Quinn #18.

Harley recaps the recent issue’s events describing her tangle with the Mayor which probably got Mason thrown back into jail. However, a call comes in from Harvey and Harlem who were in Rockaway looking for the missing Captain Strong. Last issue we saw the pair being beaten up by the Captain and now they are missing and it is up to the gang to go find them.

Eggy, Bolly, Carli and Harley Queens head out to the last reported sighting of the two missing gang members. They find ambulances on the scene and the bar smashed to smithereens. Harvey and Harlem are OK but have been sent to the hospital. They are told about Captain Strong’s bad behavior and new taste for alien seaweed and that he is on his way towards his home at Atlantic Beach.

Harley decides to follow him with Bolly and sends the rest of the team to see Harlem and Harvey at the hospital. She checks in with Coach and gets the address of the Captain’s house. Unfortunately the two run into a bunch of street toughs that want to steal Harley’s phone. She warns them that the phone will self destruct once it is out of her personal space. They disregard her warning and meet a fiery end while Harley and Bolly run from the flames.

Passing a tattoo parlor, Harley and Bolly are nearly hit by one of the artists leaving the building through a window. He has been thrown by Captain Strong who eats some more glowing seaweed before doing battle with the two. They are helpless against the seafaring strongman. They stage a diversion while Harley steals and eats some of the glowing seaweed.

Then things get weird.

Harley goes into a dream where she is the Captain of a pirate ship on the seven seas. The ship approaches another where she spies Joker who has Poison Ivy in a cage. Harley vows to save Ivy and attacks and boards Joker’s vessel. Joker and Harley fight and manage to tear much of their clothes off before they finally kiss.. However, the ship sinks and Ivy saves Harley and brings her ashore. Dream-Ivy mentions that Harley better get up to fight Captain Strong and stops him from eating the space seaweed.

Suddenly Harley wakes up in a hospital bed with Ivy at her side. She has been asleep for a day and a half. Harlem and Harvey are OK and have checked out of the hospital. Ivy tells Harley that the Gang converged on the Captain’s Atlantic Beach house but were discovered before they were ready to spring their trap. The Captain ate some more seaweed and defeated the whole Gang and took them to parts unknown. Coach says that they were last heard of in the east. Harley figures that they are at sea on Captain Strong’s boat and rushes off to save them.

On board The Murphy Swan, Captain Strong’s head is clearing and he realizes that the space seaweed is causing him to act out. He can’t help himself though and eats some more and decides that he needs to kill the Gang members. Until next time…

First of all I have to make it make it clear that I really, really, really want to like this book. I’ve loved Conner and Palmiotti’s Harley up to Convergence. She is such a zany character in their hands it is a terrific contrast to some of the other, darker comics on the stands.

I am still not feeling the Harley Gang working however. At 12 members the team seems too large for any characters to really emerge and especially for Harley to develop interesting relationships with any of them. In this issue it is established that Bolly Quinn is a grammatical stickler and has some strong, yet mundane ideas about neighborhood gentrification.

There are some great moments like in the exploding telephone scene where Harley is trying to get Bolly to run faster to avoid the flames. The reader realizes that Harley wasn’t joking about the bomb and that Bolly didn’t realize this. This makes for a pretty funny page or so.

The dream sequence in the middle of the story is kind of interesting but it interrupts the action. Of course, having the Joker appear in a dream sequence and kiss Harley will please fans of the couple.

I would rather they took this time for Harley to develop relationships with her team. I’m just not sure where this Gang is going and I can’t help to think that it would have been better if they had used the Birds of Prey model with three or so in the field and Coach playing the Oracle role back at headquarters.

I am hoping that Conner and Palmiotti make the Gang of Harley’s really come together. Develop some individual characters and build real relationships with the zany Harley at the center of it all. Come on guys, bring back the magic!