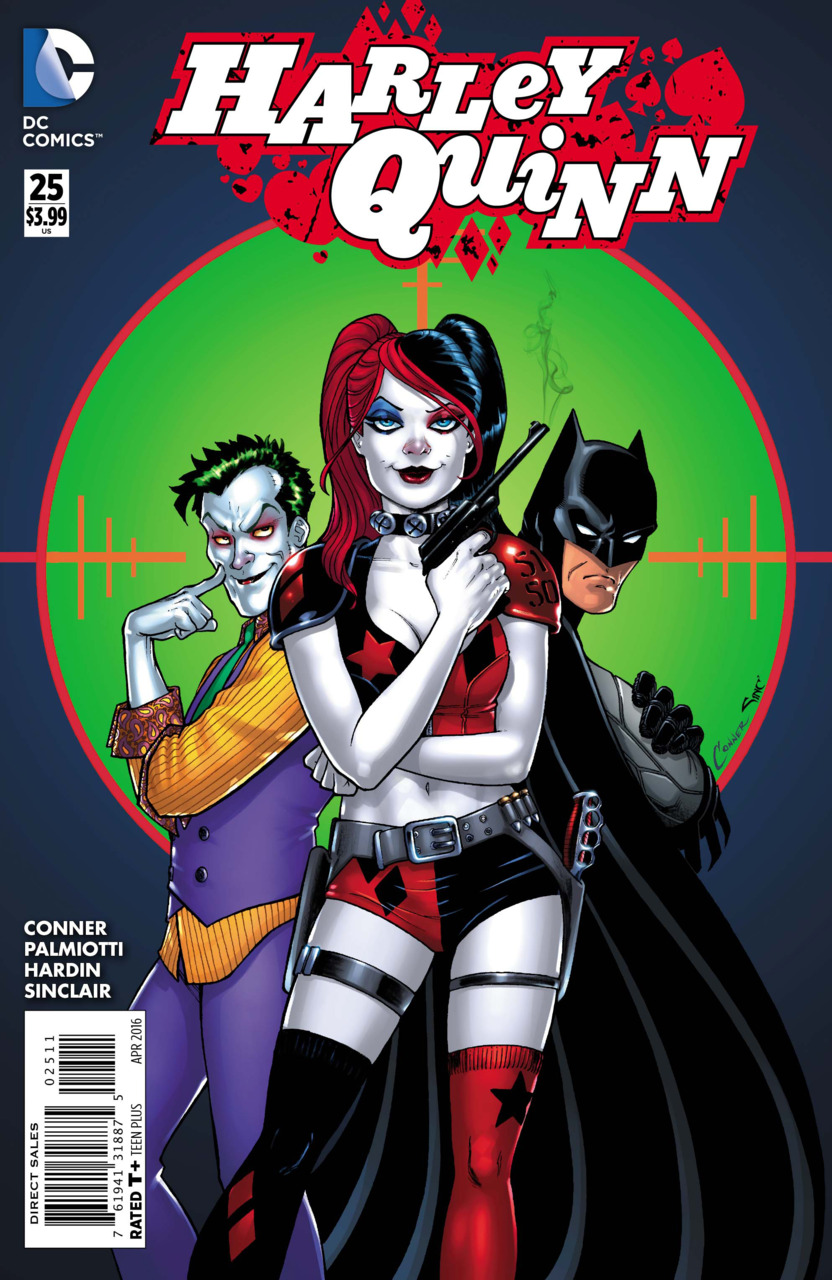 Harley heads to Arkham to rescue a friend but has an inevitable run in with Joker. Can Harley resist the evil machinations of the  clown prince? Find out in Harley Quinn #25.

Harley arrives in Gotham and is met at the train station by Poison Ivy. Harley is going to Arkham Asylum to break her buddy Mason Macabre out of jail. Mason has been unjustly imprisoned in the infamous nut hatch for accidentally killing the son of the Mayor of New York City.

Harley and Ivy catch up over drinks and to discuss the plan for the jailbreak. Harley asks if Ivy has arranged for a boat which she has. Ivy has and is concerned about Harley returning to Arkham and running into her old flame, Joker.

Harley arrives in Arkham disguised as Dr. Shipman who is being given an office in the Asylum. Her disguise hasn’t fooled anyone, they know who she is and plan on trapping her in the office once she sets up. Harley has planned for this. She takes a pill which is an antidote to the gas she releases on the guards. The gas turns the guards into big, green, angry monsters who rampage their way through the asylum causing all kinds of mayhem. Harley fights her way to Mason’s cell and releases him with a card key she lifted off a guard. As they leave Mason’s neighbor calls out to Harley, it is Joker.

After some verbal sparring between Harley and Joker our heroine enters his cell and the two roughhouse. Suddenly, the pair kiss. However, it is just an excuse for Harley to bite Joker’s lip giving him a nice gash. After some more fighting Harley finally beats Joker into a heap and leaves him battered on the floor of his cell. Harley and Mason go to leave but Joker comes out of his open cell door. Harley grabs the gun of a guard she just knocked out and puts it to Joker’s head. She doesn’t shoot and says that she understands why Batman never killed him, because it would be giving Joker exactly what he wants.

Harley and Mason make their way out of Arkham through a drainage pipe and wait by the river for Ivy and the promised boat. Ivy arrives in the Bat Boat and takes the pair away. At the dock the three are met by Harley’s friends, Mason’s mother and Batman. Batman has harsh words for Harley but has arranged for Mason to go into the witness protection program so he can testify against the corrupt Mayor. Harley and Mason kiss each other goodbye and Mrs. Macabre asks Ivy is she is jealous. Ivy says she isn’t, seeing Harley happy makes her happy.

On the way home Harley’s friends give support to the emotionally exhausted Harley. Harley asks Queenie to do a makeover on her which is agreed to. Until next month.

Writers Amanda Conner and Jimmy Palmiotti really took the lion by the tail in bringing Joker back to Harley’s comic book. Some may be upset to see the two back together and others might be upset that Mr. J wasn’t in the story enough. What the writers have pulled off however is something more interesting than simply some stunt casting. Harley’s dysfunctional relationship with Joker is beautifully contrasted with the loving relationship she and Ivy have. The ladies have a true altruistic (not platonic) love between them which shows how much Harley has grown since she and Joker parted. The writers deserve credit for taking this on and pulling it off so well. Some of the plot points, such as Harley getting a job in Arkham so quickly, are a bit of a stretch but all in all it mostly works.

Artist Chad Hardin and Colorist Alex Sinclair turn in the same quality work Harley fans have come to expect. A slightly cartoonish look that plays well with the comedy but not so much that the action looks ridiculous. The colors are rich and vibrant but don’t distract from the story. Joker looks particularly menacing in these pages.

I am not going to even pretend to be objective about my rating for this issue. I don’t like Harley together with Joker and it was very satisfying to me seeing her lay a beat down on him. I much prefer the relationship she has with Ivy and we got a very good slice of that here. I thoroughly enjoyed this issue and look forward to what looks to be a remaking of Harley’s look. Hopefully she won’t get skanked up but we will have to wait and see.