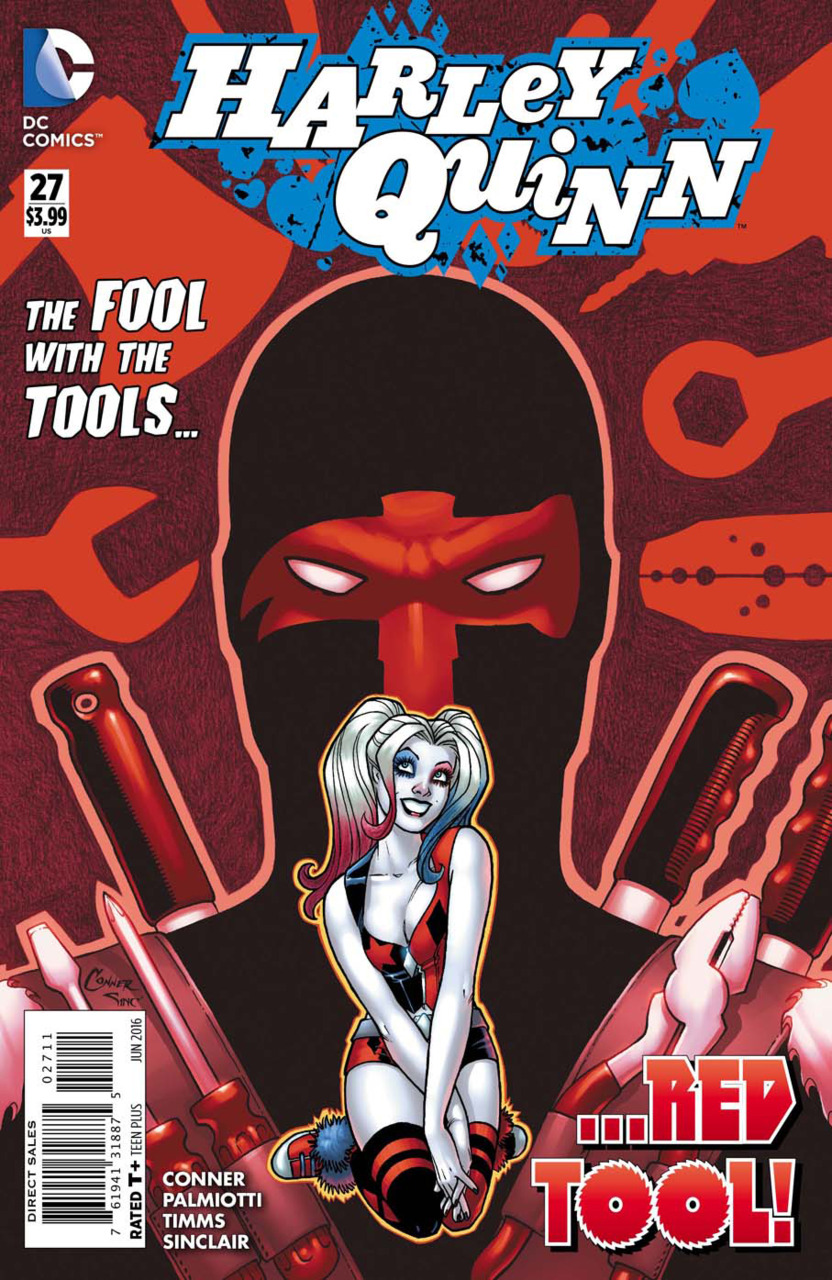 Harley’s roller derby battle with Red Tool takes an unexpected turn as she has to find a way to survive his devious plan in Harley Quinn #27.

Harley continues her Roller Derby battle with the mysterious Red Tool. Her friends have bet big money on the match but are concerned that Red Tool looks like more of a handful for our anti heroine than they expected. The pair skate around the rink and Red Tool seems very aggressively flirty with Harley who is playing very hard to get. As they throw weapons at each other and maim innocent audience members their fight gets more and more intense. This isn’t going to be the pushover that Harley expected. Suddenly Red Tool presses a button which causes green knock out gas to fill the arena. With everyone asleep Red Tool breaks out into song. He pulls out a group of names of people he is looking for that are in the audience and gets them all in a pile. He removes a strange looking drill and uses it on these people in a mysterious way.

Meanwhile at a Manhattan restaurant, Harry, the guy who is the Mayor’s brutal fixer, is out to dinner at a fancy and exclusive restaurant with his wife. He explains some of the dirty deeds he had to do to get the table and his wife, while surprised at his disregard for the finer points of the law, is impressed by his ability. They Mayor calls and tells Harry that because the current Chief of Police just had a heart attack that he is going to give the job to Harry. This news inspires Harry’s wife to want a new apartment and car.

Back in Coney Island, Red Tool has Harley handcuffed at the top of the Wonder Wheel. Harley wakes up from being knocked out by the gas. Red Tool begins to pitch woo in her direction. It turns out that Red Tool loves and hates her at the same time. He feeds her hot dogs and fries just how she likes them. The two share a love of bad food and ribald jokery.

Back at the skate club Harley’s pals wake up. It turns out that Red Tool has used his strange looking drill to tattoo various words like ‘thief’ and ‘greed’ on the foreheads of some of the roller rink patrons. They attempt to call Harley to see if she is ok but Red Tool answers her phone. He says that he is Harley’s assistant and that she is tied up and can’t talk. With a mouth full of frankfurter Harley mumbles something unintelligible and Red Tool hangs up.

Harley asks why he is hot for her and he says that he admires the way she sticks up for people that can’t defend themselves. Also, he has fallen for her sexiness and strange mind. He tries to show her a video he made of his secret origin on an iPad but it has run out of batteries. It turns out that Red Tool was a soldier that became a hero and lost an arm that was replaced. After several experimental operations he went kooky and became Red Tool. After a little banter, Harley kicks Red Tool out of the Wonder Wheel car and he crashes to the ground on top of a mugger. Harley picks the locks of the handcuffs and heads home.

Harley gets an update from her pals on the tattooed people at the skate rink and head upstairs to breakfast. Harley notices her butt hurts and it turns out that Red Tool has tattooed his number on her behind. She calls the number and an answering machine gives her a time and place to meet him. She goes to the address but is surprised that the building is a church. She goes inside and finds bound and gagged people in the pews and Red Tool stands with a priest ready to marry her. Until next month…

Writers Conner and Palmiotti have given Harley someone that can match her fighting prowess, trickery and filthy mind. This competitor is a knock off of the currently popular Deadpool from that other comic book company. Red Tool’s real name is Wayne Wilkins while Deadpool’s is Wade Wilson. Also, the front cover of this month’s issue declares him “The Fool with the Tools” while Deadpool’s nickname is “The Merc with the Mouth”.

Harley and Red Tool are well matched and interesting together. It is also a fun touch having him singing as he tattoos the individual sins on the bodies of the Roller Derby patrons. It isn’t clear, though, what purpose the tattooing had and the fact that Red Tool was on some kind of greater mission wasn’t set up at all.

Also, the love/hate relationship Red Tool has with Harley seems merely a convenient plot device to get the two in a humorous situation. The banter is good, there are lots of good lines that come from it but it does seems forced. Also, while it was funny that Red Tool spent a lot of time animating his origin story but couldn’t show Harley because his iPad ran out of batteries, it seemed like a distraction to the plot line, albeit brief.

The art by John Timms and colors by Alex Sinclair are of the same high quality that fans of the series have come to expect. Continuing the style of last month’s issue, Harley is drawn more sharply than she has been in the past with the blond hair and blue and red tips that she will have in the upcoming Suicide Squad movie. However, there is one panel where Red Tool pushes the button to release the green knock out gas that was a little hard to work out. It took some time to realize that his hand was in the foreground with the button under his thumb.

One standout in this issue is the lettering by Dave Sharpe. Red Tool’s dialogue is in tool shaped word balloons which adds an unexpected amount of fun to the book.

I enjoyed this issue though the plotting was a little heavy handed. Red Tool and Harley have some fun interactions and they seem well suited to each other. He is clearly a take off on Deadpool which is fun in itself, but doesn’t feel as vivid as he could have been to me. I know it seems ridiculous to criticize a Harley Quinn comic on plot and believability and I don’t want to give the impression that this is a bad issue. However, having a Deadpool knockoff meeting up with Harley could have been stronger though there are some very good moments.