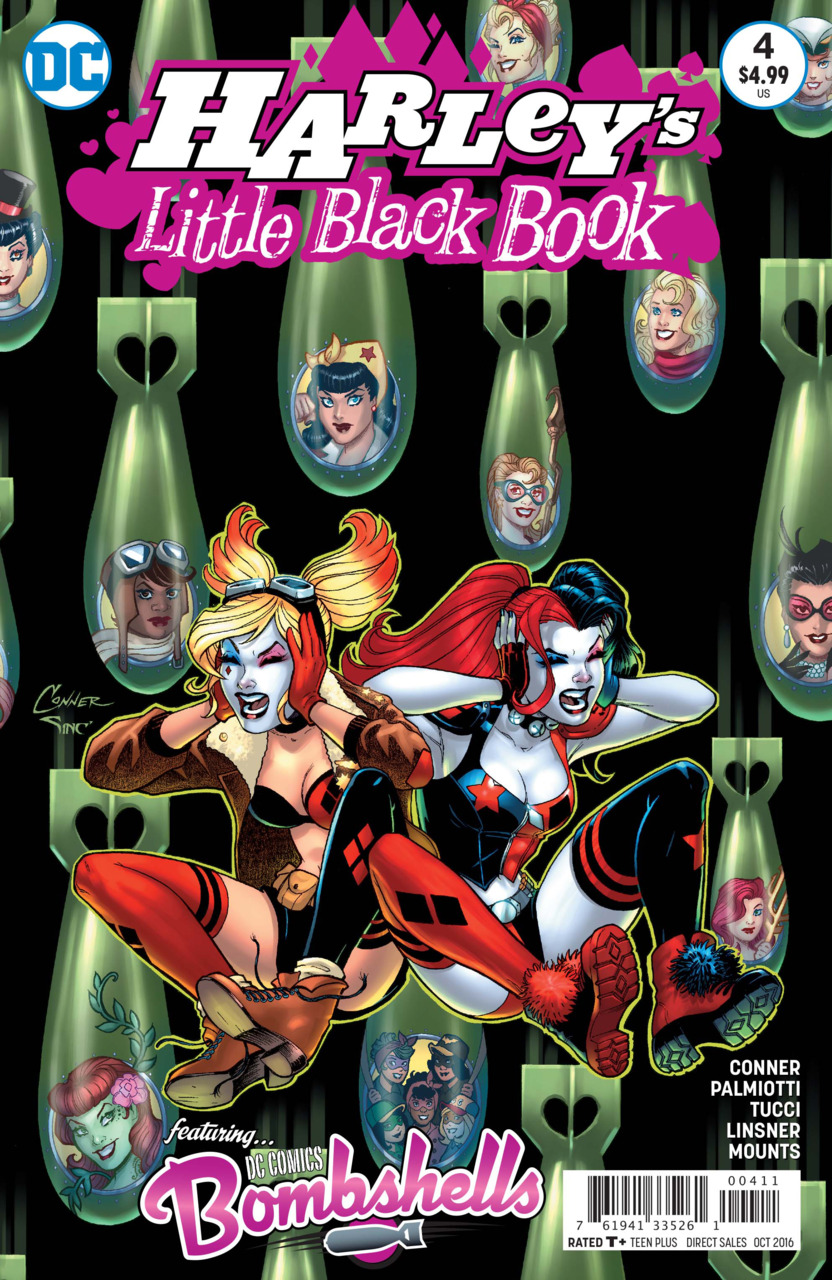 Harley takes a trip to the dark days of World War 2 as she meets the DC Bombshells including the only character as nutty as she in Harley’s Little Black Book #4.

Spoilers from the past….

As our story begins Harley is parachuting in a snowstorm with WW2 Bombshell versions of Batwoman and Big Barda.

How did Harley get herself into a situation like this? Funny you should ask. In our present time, HQ has been engaging in some extracurricular time travel and has stolen three of Superman’s balls…spheres from the Fortress of Solitude (to be explained in the next issue apparently). The green balls are for time traveling. Big Tony and Eggy want nothing to do with going on a temporal adventure with our Queen of Clowns. Harley creates a time portal and jumps into a World War 2 American military camp. Amanda Waller, or should I say Commander Waller, emerges from her tent and orders Harley to discuss their plan to rescue US Army Brigadier General George Beatty who is being help captive by the Nazis in a mountaintop castle.

Knowing that she is going to get to kill Nazis excites Harley to no end. She, Big Barda, and Batwoman parachute close to the castle and hike through the woods to a nearby town. In the town is a nightclub where Zatanna is performing. In fact, the whole place is crawling with Bombshells.

Meanwhile up in the castle, a Nosfaratu-looking Nazi has ordered three ladies for the night’s entertainment. He is also waiting for a torture Doctor who is scheduled to arrive..

Harley, Batwoman, and Big Barda go into Zatanna’s dressing room to freshen up. Harley goes outside to look at the castle. Out on the road an SS car approaches. Inside the car is Bombshell-Harley who is posing as the torture Doctor on her way to the castle. The car hits Modern-Harley. When Bombshell Harley goes out to check on her doppelganger the two touching each other causes a temporal explosion, knocking out Modern Harley. The assembled Bombshells assume Modern Harley is a spy and hope that their plan to spring General Beatty hasn’t been exposed.

The unconscious Harley has a dream that she summons the Vampire Count Jokula who carries her away to his castle. The fanged Joker sports a little Hitler-stache. Harley shoots off the fiend’s head among other indignities. Harley wakes up tied to a chair being interrogated by the Bombshells. The classic ladies leave her behind as they head to the castle to free the General.

Bombshell Harley, posing as the torture Doctor arrives at the castle and is surprised to hear that Der Fuhrer is going to witness her work on the General. She asks to see the prisoner and is brought to his cell. She tells the General that they have a plan to get him out of the castle. The other Bombshells stand outside the castle ready for the signal to attack.

Modern Harley manages to get our of the ropes she is tied with and heads out into the snow up to the castle. On the way a car pulls over to pick her up. Inside the car is Adolf Hitler himself, en route to the torture session. Harley lays a beating on the putz and disables the driver which sends the car off a cliff. Harley gets out of the car and uses a machine gun to explode the car with Hitler inside. Watching from outside the castle, the Bombshells see the explosion and believe it is their signal to attack. Modern Harley rushes into the castle but finds her gun is out of bullets. Luckily the other Bombshells arrive fully loaded.

Bombshell Harley realizes that her plan is kaput and breaks the General out of his cell. All of our heroes do a number on the Nazi horde.

Hitler wasn’t killed in the car explosion but is spotted by Modern Harley who lays another satisfying beatin’ on the cretin. Driven mad by Harley’s voice the feckless fuhrer shoots himself in the head. As the Bombshells clean up the last of the baddies Harley is transported back to the modern time.

Harley has apparently been gone for an hour and tells an unimpressed Big Tony about her adventure.

Harley’s Little Black Book is the Cadillac of all the Harley books currently running. There is a level of story, printing, and art quality that is at a very high level. This issue is no exception. Writers Conner and Palmiotti deliver an extremely fun story full of hijinx and action. Of course, for Harley fans, it helps that we get not one but two Harley Quinns this time around.

The artist for the main story is Billy Tucci. We get a little different depiction of Harley than we have in other books. Her face isn’t as well defined and detailed as it usually is, but this is due to a stylized art approach. Some of the snow scenes are reminiscent of the Thunder Snow we saw in the recent Detective Comics #934, also with Batwoman. There were a few drawings where the perspectives didn’t seem quite right, but all in all it was enjoyable art.

The dream sequence was by Joseph Michael Linsner whose high water mark is the vampire/Nazi Joker. Very creepy. The modern day pages are by Flaviano who gives Harley an almost baby-doll appearance.

The colorist for the book is Paul Mounts who always does a fine job. The purples and greens of the dream sequence are beautiful and the rest of the story was done in almost a watercolor style.

While I’m not a Bombshells reader, this story makes that world seem like a wild ride. I really enjoyed this trip to the past. I would give this issue a good rating, but there is one tiny detail that gives it a slight bump. The Bombshells wait for the signal to attack the castle on the rooftop of Dar Cooke Haus. A closeup of the team repeats a portion of the name “Dar Cooke” a reference to the late great Darwyn Cooke known for such classic comics as The New Frontier and Trail of the Catwoman. Reminding me of one of my favorite creators is worth at least half a Batarang in my book.