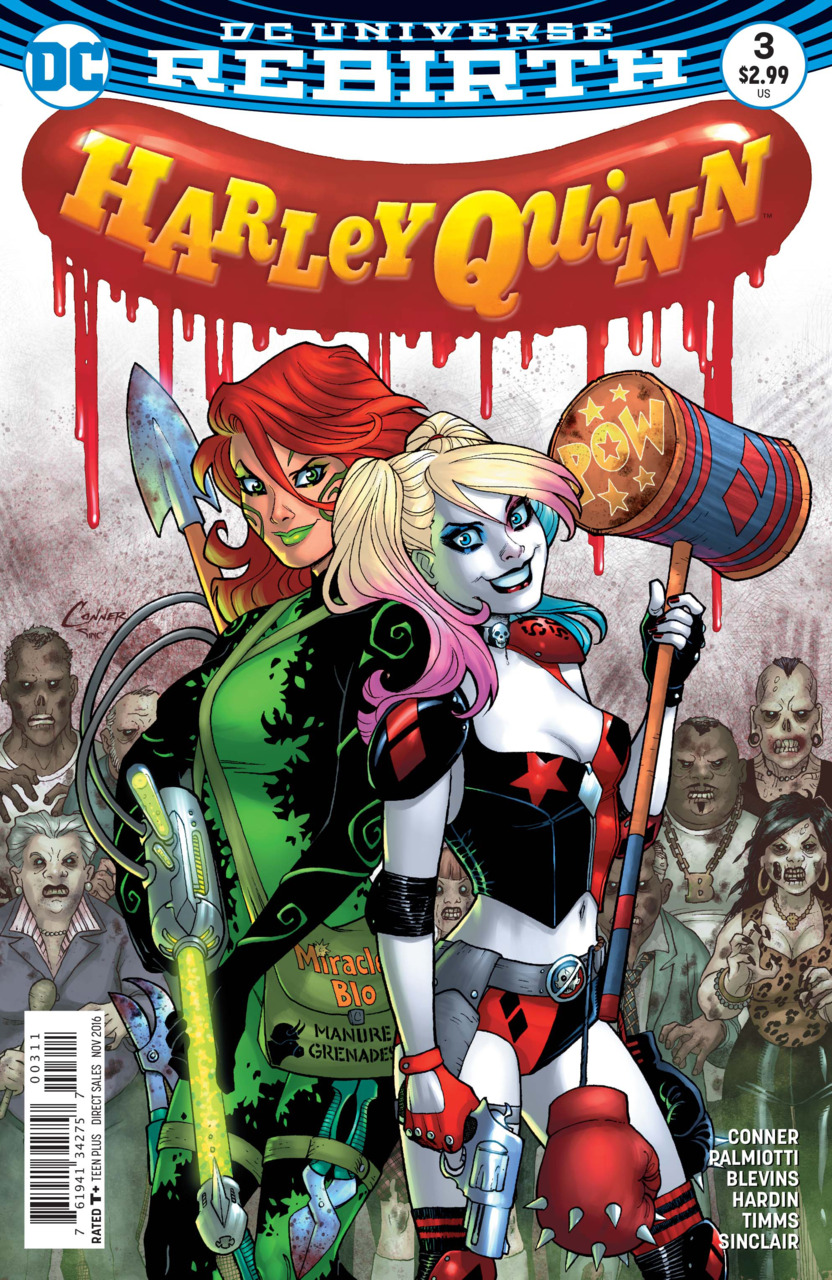 Following the events of last issue, Poison Ivy has rescued Harley and the crew from the rampaging alien-infected horde, with the aid of her trusty weed-whacker! In the meantime, a joke is set up as reports come from the hospital that Red Tool is being operated on and given a fresh arm, donated from a famous dead identity…famous to the authorities that is…

As Harley and Poison Ivy shower, clean up and get rid of the zombie parts in each others hair etc, the whole gang must then confront an up coming crisis – A FOOD CRISIS! i.e. lack of it. Food is one of Harley’s chief pleasures, so this is quite the dilemma, as the situation outside means they have to stay indoors. After some assessment of whether Eggy would be a good feed, (Harley indicates yes) and rejection of an all-date diet due to a lack of toilet paper, our intrepid gang march down to the tunnels in the basement beneath Madam Masque’s Wax Museum. A boarded up door with a pentagram on it is the only means of exit down there, and perhaps only Harley would think this is a good idea…luckily it’s her book!

They soon come to series of doors, Harley of course wants to unlock the chained and barred one, (in which a mysterious beast has already been teased) but on the advice of the “more level-headed” members of her posse, they take one that should lead to the basement of a former theater, but before they can get there, more infected attack. When things are looking grim Harley earnestly goes to say something potentially deep to Poison Ivy, but Ivy shuts it down and tells her to keep fighting. Cue the resolution of the alien subplot behind the infection when two alien parents recall the bits and pieces of their son that made it into all the hotdogs on Coney island, thereby ending the infected menace as bits of the aliens fly out of the infected humans, killing them but ending the threat.

Harley is obviously hungry after all this activity and back at the diner, matters of state are handled, such as checking in on Red Tool (who has hilarious issues of his own with the new arm) and organizing Ivy to stay for a week with Harley, with a view (at least in Harley’s mind) to moving in.

For all those shipping Harley-Ivy, ship away! Harley is certainly dialing up the heat a little this issue romance/affection-wise which makes sense in the context of her impulsive and emotional nature. It’s always been a cool aspect of this run to have such a fun and tender relationship shown in the pages of Harley Quinn and I certainly would love to this play out and develop. I personally love several of the different iterations of Poison Ivy over the years and it’s interesting to note that in series such as this one, her own recent excellent solo mini-series, and prior classic appearances in such books as Gotham Sirens, or her appearance in No Mans Land, there is a remarkably strong and durable character in Ivy which can move in different ways. I think its great to see this side of the character explored more and if Poison Ivy doesn’t have a solo title of her own right now, being a regular character with Harley in this twice monthly title would be a really cool move from DC and a chance to grow that character in this Rebirth universe – obviously this is a title that plays reasonably light, but some of the best moments of the Harley Quinn title are the emotional payoffs scattered throughout. I think most fans of Harley who are reading would probably agree.

One thing that I always enjoy in the Harley Quinn series from Amanda Conner and Jimmy Palmiotti is that there is very much a serial/sitcom nature to it, the action will move around physical comedy and various subplots that boil through the issues. It’s a busy book in the best possible way. This was true of the previous run and I’m sure will only continue – liberated from the clutches of the alien infection, I hope the gang continues to journey on! The art is extremely consistent with the previous issues, I thought the pentagram door looked fantastic. The character models look great, Harley and Ivy are front and center this issue, and it’s generally a light, fun and slightly sexy cartoon feel to the look of this book – I also enjoy when we go in close and with a bit more detail on some of Harley’s facial mannerisms such as when she finds out there are TUNNELS or assessing Eggy for his eatability. Harley tries on another new outfit in this issue, which from a cosplay perspective must make her a delight of character to follow.

I’m giving this issue five Harley Hammers as I think it’s a perfect slice of what this title and team bring to the table each issue, and I also think it’s one for Harley and Ivy shippers to particularly enjoy and have some moments and scenes to enjoy and ponder, and perhaps look back at several issues from now. I hope the two of them make it to the Bahamas! Margaritas on the beach!