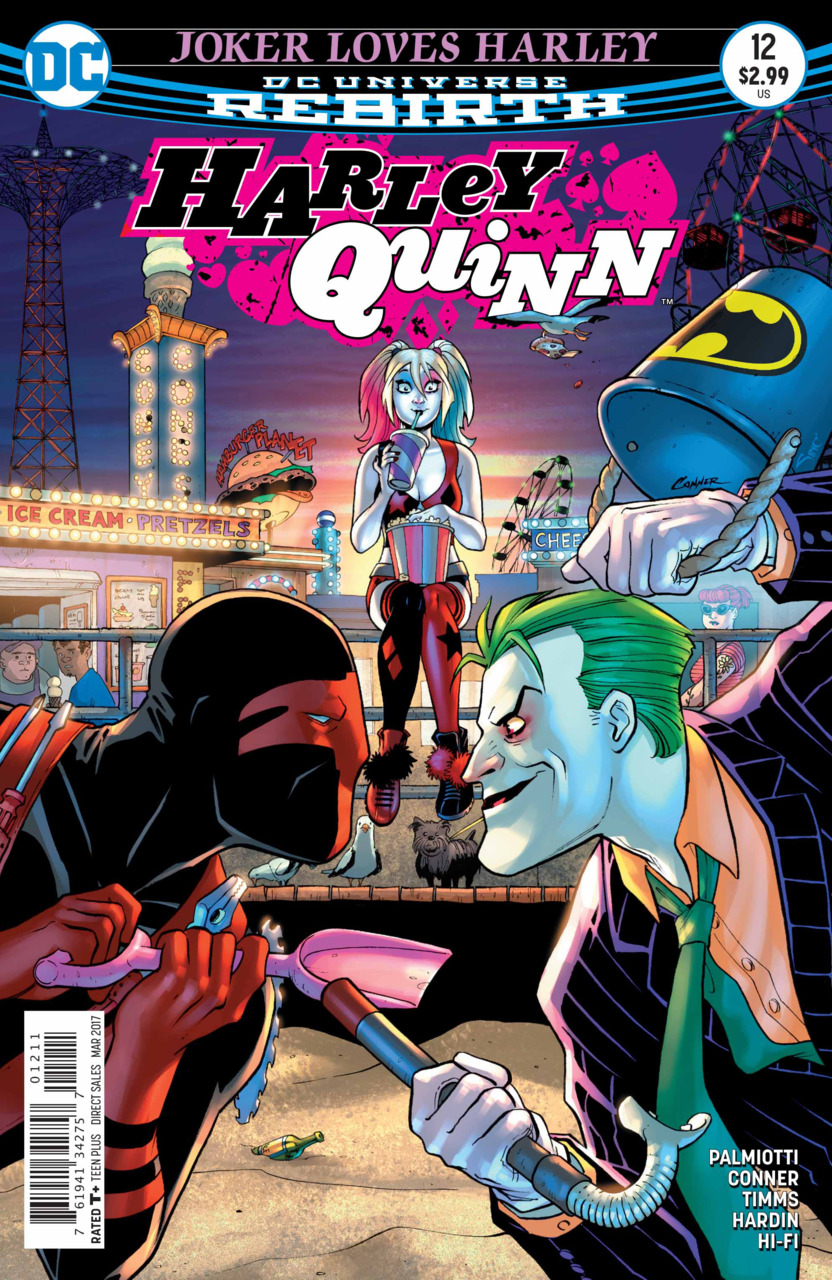 Picking up straight on from the previous issue, the Joker has come to Coney Island, due for a midday meeting with his ex, Harley. As seen in the prior issue, Red Tool set Harley’s clock back so she has missed the meeting!

While Harley is busy sleeping in, blissfully unaware, snoring and talking to herself, Red Tool goes and meets the Joker in her place. Strangely passive, Joker does nothing as Red Tool, who is highly enamored with our heroine, delivers an absolute physical pounding on the Joker, as he beats him up! As the Joker is hammered to high heaven by Red Tool, images are mixed in with scenes of the Joker flashing back to scenes of his relationship with Harley, mixed memories of him beating her up, sacrificing her to Batman etc., in general being a despicable human being.  This meshes with Harley, waking from dreams herself. Consciously the story blends Joker’s visions with Harley’s dreams, the two of these characters linked via memories of the not too distant past.

It really is quite affecting and confronting to see how Joker has abused Harley over the course of their relationship and this issue doesn’t shy away from that. It’s worth remembering what fine custodians of the Harley character Conner and Palmiotti are and I’m pleased to see them deal with the relationship like this. It would feel wrong and inappropriate to have the Joker hook back up again with Harley in the carefree manner that much of the title normally has. Harley DOES wake up, she does find Joker and Red Tool, but her “rescuing” of Joker is only the precursor to Harley then taking over to beat down the Joker herself!

This issue deals with a tricky subject matter in repositioning the Joker-Harley dynamic and is perhaps at its most powerful when it handles the physical assault of Harley by the Joker in the dream/nightmare state, rather than the beating he takes at the hands of Red Tool and later on the Brooklynites themselves, when Harley forces the prone Joker to wear a sign abusing Brooklyn, which incites the locals. The highly cartoon nature of the “real time” images, which is normally of great assistance to the vibe of the Harley Quinn comic probably at a slight disservice when handling the Joker – the cartoon style doesn’t quite capture his inherent evil and the lack of activity from him neuters the character. Making the Joker a passive receiver of violence works perhaps less well than intended by the writers, simply because by his very nature Joker is a predator – by taking that away the Joker in this issue doesn’t feel like any Joker we have seen before, his natural threat reduced to a punching bag.

I say none of this because I in any way object to his treatment, indeed he deserves it (and more). The final, almost off-hand check of the Joker by Harley after he has beaten and run over, her comment about his prone body, “still alive”, confirms to the reader that her caring for Mistah J is blunted, reduced and compartmentalized into the past – Harley has realized what a monster he is, as surely as we do.

Any romance mistakenly applied to the relationship is stripped away, it can’t survive open panels of him beating her and we are left with a monster now at the mercy of a character (Harley) who is no longer his victim or unwitting thrall, but a character bursting with her own life and agency.

On second thought, maybe I did enjoy his cartoon kick-around by Red Tool and the Brooklynites more than I realized at first! This is another tight, consistent issue of Harley Quinn by an accomplished team. Although it certainly seems things will come to their climax in the next issue, I’m left feeling that I prefer my Harley without any joker at all. She’s outgrown him and perhaps outgrown the after party pf their relationship as well.