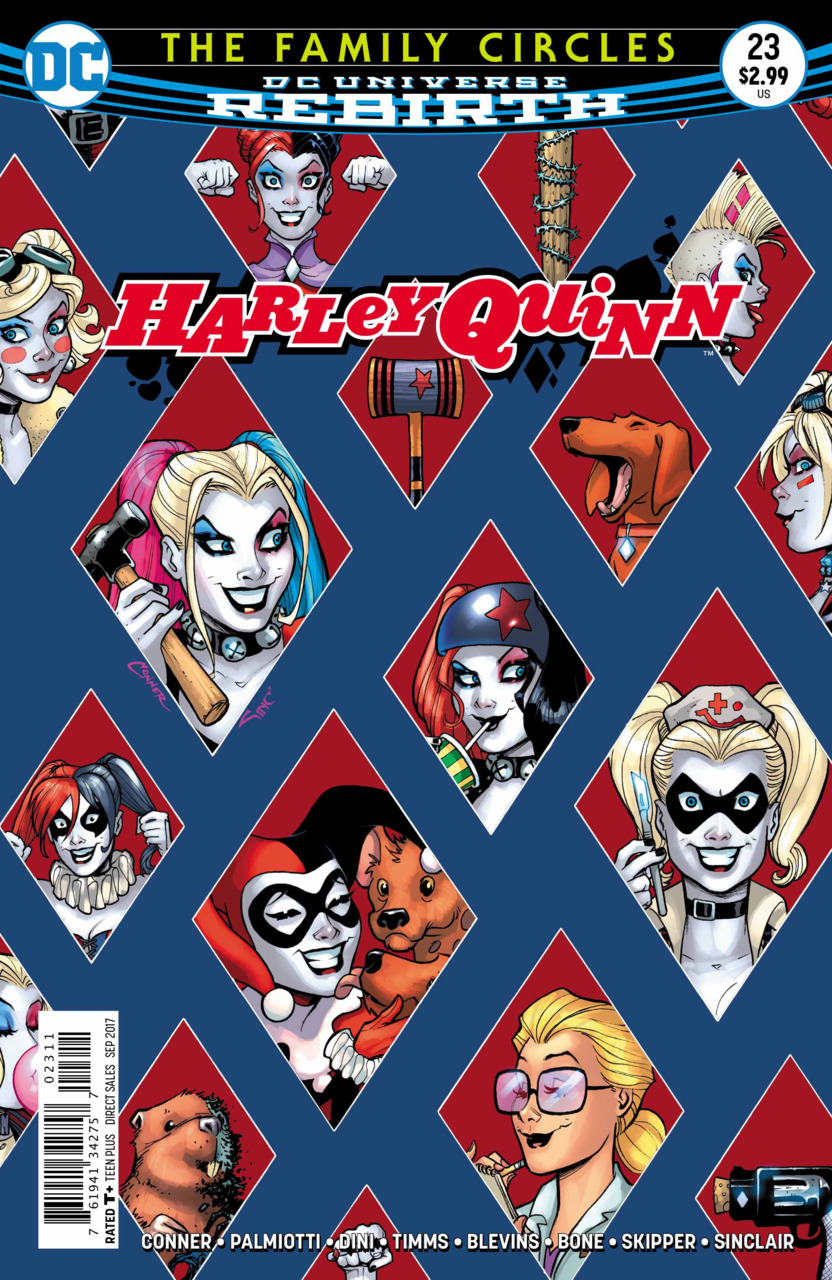 (Spoilers ahead) Picking up from the events of last issue, Harley has a lot on her plate! Harley Sinn, sprung from Arkham, has captured Madam Macabre and Harley’s sometime boyfriend and chained them up in Harley’s apartment. Sinn is rather mouthy, abusing Harley’s friends, pets AND the Gang of Harleys, even as she alludes to dirty deals with the Mayor, and in one gorgeous splash page Harley decks her with a massive uppercut, knocking Sinn straight out!

Harley would love to hang with her boy, but her parents are in town and she has promised them dinner! Harley does a quick costume change, trying to get tasteful and a touch conservative for her parents. It’s worth noting there has to be a fortune in action figure and Funko Pop variants featuring Harley’s many costumes – it’s one of the delights of the comic, a nice addition to a lively story.

Enter Goat Boy! Handsome and horny, as Harley says with a laugh. He’s Harley’s plus-one for this parental dinner, and he’s a positive delight, bringing Harley’s mother some roses, half of which he ate on the way there. A common theme in all of Conner and Palmiotti’s Harley Quinn stories is that of “outcasts” and “freaks” being normalized as they gather together at Harley’s pad – we quickly learn that for all their eccentricities what binds the characters together is the sense of community and a savage sense of hummer – they aren’t really “freaks” except in outside perception. I liked as Goat Boy and Harley travel through the subway to the dinner, they comment on the fact that really there are lots of oddballs in this town – there’s even a wider societal point where Harley says, “I like all the differences in everybody…the more money gets pumped into the city, the more personality it loses.” It’s a fair point and calls to the heart of the book.

Meanwhile, there’s more interaction between the Chief of Police, and the Mayor. In this issue we see a sudden ramp in their previously “cold war” animosity. Things are starting to come to a head, and probably have hit that point, as the Chief of Police (and Harley’s supporter) assaults the Mayor in the bathroom after some tough talk on both sides. Clearly, this won’t end well and the sequence ends on a “watch this space” vibe.

After all the buildup with Harley’s parents, it’s nice to see them be given some pages as Harley has treated them to a dinner aboard a luxurious boat. There’s something curiously blank and sarcastic about Harley’s father, he’s almost a cipher spitting droll one liners but it’s amusing, and in keeping with the sarcastic humor that underpins the book.

Cut to a mysterious meeting in a park between Redtool and Harley’s close girlfriend Poison Ivy – I’ve spoken in previous reviews of my fondness for this relationship and how the writing team have handled it. Although Poison Ivy did shut down Harley’s hopes of an even closer and more committed relationship, Ivy still holds a ton of affection for Harley, and gladly agrees to whatever scheme Redtool is cooking up to help Harley. I enjoyed this sequence, which is very “in the mists of midnight” in how it is portrayed and I noticed Ivy is wearing a more body encasing uniform, which I guess is probably overdue. The art is top notch in this comic as always – the character modelling for Poison Ivy sells her new “bodysuit look” well and there’s a stylish dynamic to the scene.

Meanwhile back at the dinner, things are going well before the sudden and quite unexpected arrival of none other than the Clock King, and Sportsmaster, come to rob the rich folk aboard the luxury boat! Obviously that’s probably an unlucky day for them as Harley Quinn is on board with her family in tow! Much to her mother’s chagrin, Harley quickly changes out of her “dinner outfit” and attacks the two would be robbers!

The second story in this book is the continuation of the Paul Dini/Jimmy Palmiotti Harley & Joker story from earlier in Harley’s career before she slept from Mistah J. It primarily focuses on Harley’s efforts to renovate a hidden hideout to her exact specifications with the help of her hard-working carpenter friend who we saw last issue as part of Mad Hatter’s gang when she’s not busy renovating houses. This is a neat little issue heavy on the charm factor and I have greatly enjoyed the story as a whole, but just the slightly manic and humorous tone of this madcap renovation. This really adds another glow to an already strong title.

I’m impressed again and again by the constituent quality on Harley Quinn and this issue continues that trend. A very strong entry, pick it up folks!